The PRC Customs Department noted that the main driver of such an incredible growth was the private enterprises of China, which increased foreign trade turnover by one and a half times. 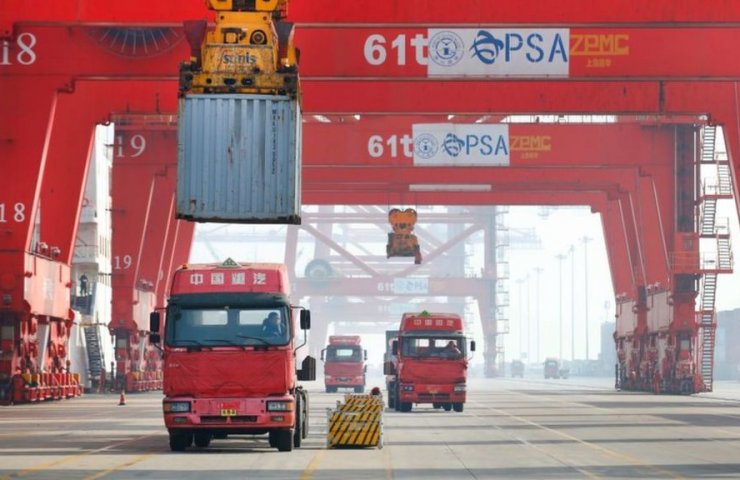 According to the General Administration of Customs of the People's Republic of China, exports in yuan terms increased by 38.7%, while imports - by 19.3%.

Chinese customs official Li Kuiwen attributed the country's growth in foreign trade to continued progress in the prevention and control of the country's epidemic, as well as socio-economic development.

The vitality of private enterprises has increased, they have become the main driving force behind the growth of China's foreign trade. In the first quarter, their foreign trade turnover rose 42.7% to 3.95 trillion yuan.

During the same period, ASEAN remained China's largest trading partner. It was followed by the European Union and the United States, according to customs data.

In the first quarter of this year, China's trade with countries along the Belt and Road rose 21.4% year on year to 2.5 trillion yuan. China's imports and exports with Vietnam, Indonesia and Poland achieved relatively rapid growth.

In the first quarter, China's trade with the other 14 member countries of the Regional Comprehensive Economic Partnership (RCEP) amounted to 2.67 trillion yuan, up 22.9% year-on-year to 31.5% of total imports and China's exports during this period.

Recommended:
Exports of Russian agricultural machinery increased by 2.2 times in the 1st quarter of 2021
Dnieper Metallurgical Plant DCH Steel in April reduced steel production by 2.8%
India's steel mills rescue a choking country from impending disaster
On this topic
China expands car market capacity by increasing demand for steel and metals
The fall in steel prices has reduced the foreign currency proceeds to the budget of Ukraine
The ASEAN leaders has led to confusion of the President trump their boycott
China's economic growth slows down due to trade war with the United States
Chinese imports of iron ore fell to three-year low
India blames Indonesia for dumping stainless steel
Add a comment
Сomments (0)
News Analytics
Volodymyr Zelenskyy signed a law to extend the export duty on ferrous scrap16-05-2021, 09:29
China's Tianwen 1 spacecraft successfully landed on Mars15-05-2021, 12:56
British law enforcement officials accused Liberty Steel and GFG Alliance of15-05-2021, 12:03
Chip shortage will cost the global auto industry $ 110 billion in revenue in14-05-2021, 12:15
Zaporizhzhya Dneprospetsstal expands international partnership14-05-2021, 11:17
The current state of the market is ideal for the sale of rolled steel - IREPAS04-05-2021, 18:41
Global hydrogen demand to grow 7-fold by 2070 - PwC21-04-2021, 12:31
World Steel Association predicts a good year for metallurgists15-04-2021, 18:19
World Steel Association defines green steel and its variations12-04-2021, 13:14
China unlikely to cut steel capacity in 2021 due to high steel prices07-04-2021, 12:11
Sign in with: