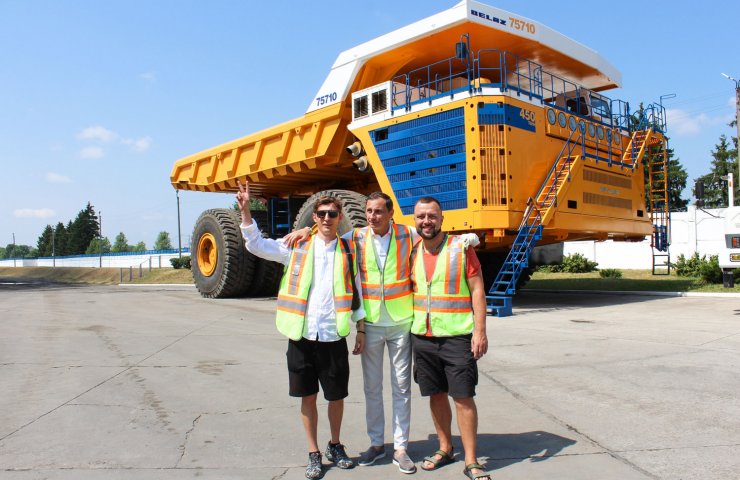 In the homeland of mega-dump trucks "BELAZ" guests were offered a rich excursion program around the main "sights" of the plant. The "golden ring" of the tourist route on BELAZ, along with the examination of the expositions of the corporate museum and the permanent exhibition of equipment, must also include the production of super-heavy vehicles.

Here the showmen were in for a tremendous surprise - the opportunity to climb onto the deck of the main Belaz celebrity - the 450-ton giant BELAZ-75710 and become participants in the test drive of this supercar. It was clear from the eyes and undisguised emotions of the celebrities that the largest mining truck in the world made an indelible impression on them.

- I generally went here to fulfill my childhood dream, - admitted Pavel Volya. - I have been a BELAZ fan since childhood, and as long as I can remember, I have dreamed so much of getting to the plant. I didn't even think to ride! And here "BELAZ" of 450 tons is fantastic! And the enterprise itself is simply magnificent. I must admit, I did not think that BELAZ was such a new, such a cool plant. I say this from the bottom of my heart. I'm totally impressed, just wow! The workers of the plant are very sincere guys ... Cool! We took pictures with everyone with great pleasure. Thank you very much everyone.

Vadim Galygin, who is not the first time at the machine-building giant, was also very pleased with the visit to BELAZ:

- I was impressed by the long history of the plant. From the moment it all began in the 40s of the last century, these peat machines ... and to what technical point of view the Belarusian Automobile Plant has developed as a result is, of course, amazing. And how many units of various equipment are produced at the plant! When they say that such a car as a 90-ton truck is assembled three units a day, it's really great! I would like to wish the BELAZ team to move forward only to keep the brand of the largest dump truck in the world.