In addition, a "green" dump truck BELAZ-7558E with a carrying capacity of 90 tons was shown, under the hood of which, instead of a diesel engine, batteries are located. 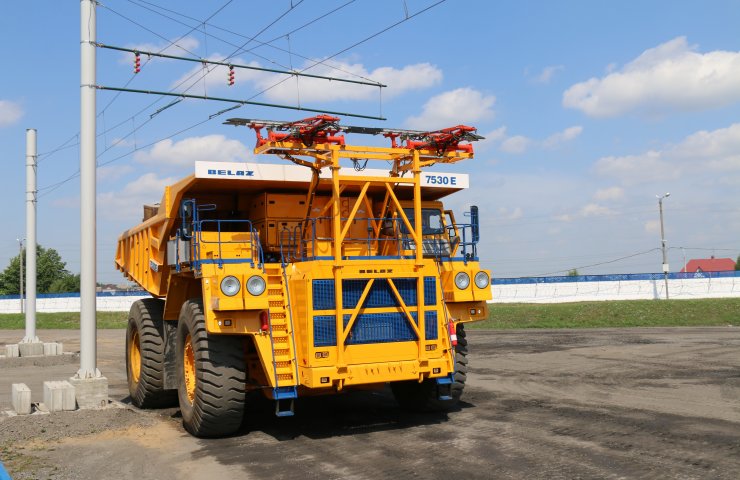 BELAZ on June 22, 2021 presented the "absolutely green" BELAZ-7558E with a carrying capacity of 90 tons. According to the press service of the company, this is a completely new type of mining transport, under the hood of which, instead of a diesel engine, there are batteries. The use of such a machine is economically profitable - the cost of transporting a ton of cargo is much lower than on traditional diesel transport. But, most importantly, this technology allows you to completely avoid harmful emissions into the atmosphere and improve the environmental situation in the places where the equipment is used.

The presentation of the new "green" model took place as part of the opening of the testing ground for diesel trolley vehicles, which was created on the territory of the enterprise. BELAZ became the first manufacturer of quarry equipment to launch its own test site for diesel trolley vehicles with a trolley line with a total length of more than 400 meters, 33 supports and a traction substation with a capacity of 1.8 MW.

“The production of such machines is a promising direction in the development of BELAZ quarry equipment, taking into account the global trends in the use of alternative energy sources. The operation of the diesel trolley car helps to reduce emissions of harmful substances into the environment and improve the ecological situation in the quarries and adjacent regions. We offer comprehensive solutions for organizing all the necessary infrastructure. And we believe that this approach will help our customers increase productivity and reduce transportation costs. ”

According to preliminary agreements between BELAZ and Vostochnaya Mining Company, one of the largest coal producers in the Far East, in 2022 it is planned to build the appropriate infrastructure on the territory of the Soltsevsky Coal Mine in the Uglegorsk District of the Sakhalin Region to conduct comprehensive operational tests of dump trucks for diesel -trolley performance. At the first stage, the VGK will build an experimental section of the trolley line with a length of 1.5 km, on which 5-6 such machines will operate. In the future, upon successful achievement of the declared technical and economic indicators, the possibility of expanding the experiment will be considered up to a complete transfer of the entire fleet of dump trucks.