Georgia's economy shrinks by 11.5% in January

Georgian Dream won the parliamentary elections in October last year, but the opposition said that the vote was rigged and accompanied by violations. 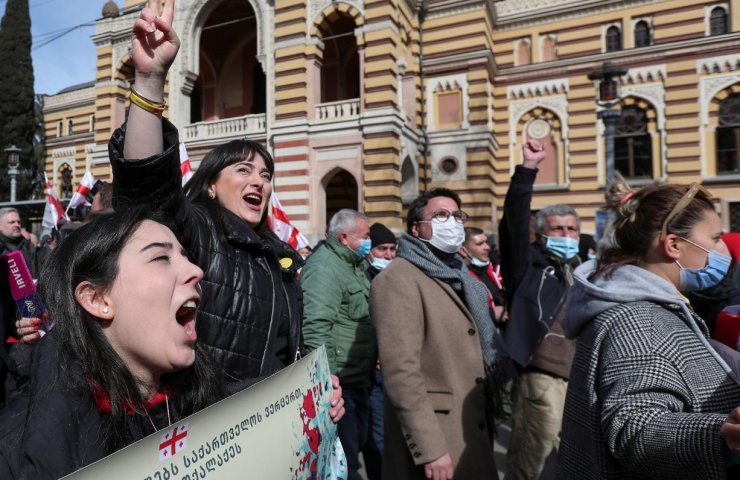 In January 2021, the Georgian economy contracted by 11.5%. This was announced on Friday by the executive director of the National Statistics Service of Georgia, Gogita Todradze.

According to him, in January, compared to the corresponding period of last year, there was a decrease in the following areas of activity: construction, transport and warehousing, manufacturing, provision of accommodation facilities, art, entertainment and recreation, activities related to real estate. At the same time, growth was observed in the areas of information and communication, finance and insurance.

At the same time, as the official said, in January 2021 the number of newly registered enterprises amounted to 2.8 thousand, which is 23.3% less than in the same period last year.

According to the IMF forecast, Georgia's economy will grow by 3% in 2021, while inflation will drop to 3.7%.

Today, hundreds of people took to the streets of the Georgian capital Tbilisi to demand the release of opposition leader Nika Melia.

On Tuesday, police detained Melia, chairman of the opposition United National Movement (UNM), after storming its offices and clashing with his supporters.

Melia is accused of inciting violence during street protests in June 2019, but he dismisses the charge as politically motivated.

The case prompted Prime Minister Giorgi Gakharia to step down and warn that Melia's detention could exacerbate political divisions in the country of 3.7 million.

The United States and other Western countries have expressed concern about Melia's detention and said it could harm prospects for dialogue between the opposition and the ruling party.

Recommended:
Oleg Gladkovsky's Bogdan Motors declares UAH 3.4 billion in losses for 2020
Interpipe delivered premium sleeveless pipes to Uzbekistan
European auto industry ready to move to electric vehicles much earlier than 2030 - ACEA
On this topic
Metinvest extended maturity of bonds
The IMF has transferred to Ukraine $ 2.1 billion
Reuters: Ukraine is not negotiating on debt restructuring
The new Minister of Finance of Ukraine: cooperation with the IMF is "an absolute priority"
The IMF said "very good progress" in negotiations with Kiev
The fall in steel prices has reduced the foreign currency proceeds to the budget of Ukraine
Add a comment
Сomments (0)
News Analytics
Iran is satisfied with the reaction of the world community to 60% enrichment of18-04-2021, 13:24
Gas prices in Ukraine have reached a record value over the past two years -16-04-2021, 17:24
Ukrmetallurgprom asks the Antimonopoly Committee to allow Metinvest to bid for16-04-2021, 17:23
A fatal accident occurred on the territory of the Dnieper Metallurgical Plant16-04-2021, 13:01
Cars built for Euro 2012 will be repaired at the Kryukov Carriage Works16-04-2021, 12:46
World Steel Association predicts a good year for metallurgists15-04-2021, 18:19
World Steel Association defines green steel and its variations12-04-2021, 13:14
China unlikely to cut steel capacity in 2021 due to high steel prices07-04-2021, 12:11
Scrap metal market at the beginning of April02-04-2021, 11:10
Rising Chinese Prices Fueled Rising Global Steel Prices - MEPS25-03-2021, 18:54
Sign in with: