Two companies will begin to carry tourists into space in 2020

Blue Origin is Jeff Bezos and Virgin Galactic Richard Branson stated that the closer than ever to launching everyone to the Earth's orbit. Who will be first is not yet known. 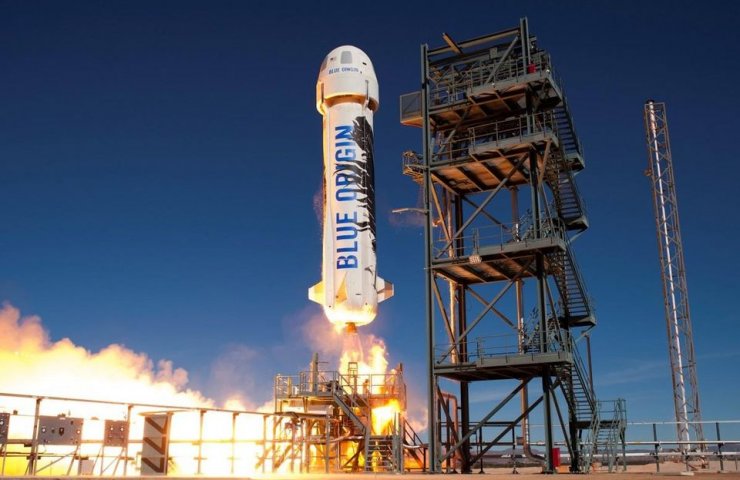 Blue Origin, the space company owned by General Director of Amazon Jeff Bezos, on Wednesday beginning 12th test without a crew on its missiles, "new shepherd", moving the first flight with passengers in 2020.

According to preliminary information, a suborbital rocket with a length of 60 feet (18 meters) reached an altitude of 65 miles (105 kilometers), crossing the internationally recognized space boundary known as the line of Pocket.

Capsule attached to the rocket, will one day take six passengers astronauts on a journey that will last a total of 10 minutes and will cost half a million dollars each space tourist.

Rockets, tested 2015, re-usable, unlike the early years of space flight. The one that took off on Wednesday, has already made five previous starts.

booster to start the engine and made a direct-controlled landing back to Earth, while the capsule fell to the ground in a few minutes with three parachutes landing in a cloud of dust.

Previously, the company relied on its first flight with passengers on Board at the end of 2019.

Another company participating in the race to space tourism is Virgin Galactic, founded by British billionaire Richard Branson, who hopes to deliver passengers to the border of outer space on the spacecraft in the shape of an airplane, which cleared the Boeing 747 at high altitude.

Virgin also said it plans to launch its first regular flights into space in 2020.

Recommended:
TPK demonstrates the benefits of using steel structures
YUZHMASH declares its readiness to produce light-class launch vehicles
The South Korean company Caris will begin manufacturing electric buses at the Pivdenmash
On this topic
The European Union has allocated 3.2 billion euros to Finance the production of batteries
The Norwegian company began construction of a wind farm in Zaporizhia
General Motors estimated losses from the most prolonged strike in the company's history
Mitsubishi-Hitachi Metals Machinery acquires Siemens stake in Primetals Technologies
Israeli company General Robotics intends to achieve 100% efficiency in the destruction of drones
Юристы нажились на «дизельгейте» Volkswagen на 1,77 миллиарда евро
Add a comment
Сomments (0)
News Analytics
"Metinvest " in May increased revenue by 13.6% versus April, debt increased by04-08-2020, 18:49
Metinvest's Kryvyi Rih GOKs will pay double taxes to the local budget until01-08-2020, 14:16
US Steel will not restart blast furnaces in Indiana until the end of this year01-08-2020, 14:02
ThyssenKrupp closed the deal for the sale of the elevator business01-08-2020, 13:53
Minister for Strategic Industries of Ukraine inspected YUZHMASH workshops31-07-2020, 09:49
Steel begins to lose the battle with the aluminium due to the growing27-07-2020, 17:08
Gold may reach a record high in 201114-07-2020, 12:47
Steel prices in southern Europe are rising, despite weak demand23-06-2020, 10:54
Analysts expect strong demand growth for steel in China10-06-2020, 11:57
Global steel consumption in 2020 will be reduced by 6.4% - Worldsteel04-06-2020, 13:53
Sign in with: