the Tesla truck Body is made of super-hard cold-rolled stainless steel and armored glass of our own technology company. The metal of the car can withstand fire from 9mm pistol, mentioned in the presentation. 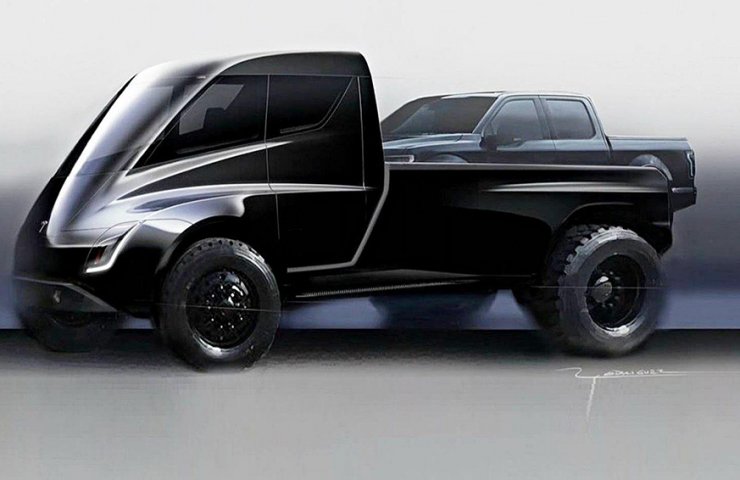 the Director General of Tesla Elon Musk on Friday announced its new product - Cybertruck pickup truck with a lifting capacity of 1.5 tons and a cost of 40 thousand dollars.

Cybertruck will be available in three variants with a range of travel on a single charge of 250 miles (400 kilometers), 300 miles (480 kilometers) and 500 miles (800 kilometers), respectively, said Musk. Different versions also differ in the number of engines from one to three. The futuristic design of the car is partially inspired by the film James bond "the Spy who loved me", said Musk on Twitter. Earlier, the head of Tesla also talked about the impact of the film "blade Runner" the look of the truck.

According to the Mask, the new truck is literally bullet-proof door uses the same alloy as in the creation of space rocket SpaceX. Shockproof car window smashed during a demonstration on stage, however, Musk has noticed that the steel ball by which it was done, flew off to the side and into the cabin was not hit.

Cybertrack Capacity is 3.5 thousand pounds (1.5 tons), it can tow a trailer weighing up to 14 thousand pounds (6.4 tons). In various configurations built-in battery will last for 250, 300 and more than 500 miles (approximately 400, 500 and 800 kilometers). Charging can be done from the mains with a voltage of 110/220 volts. Standard equipment includes autopilot, Parking, all-wheel drive.

the Price starts from pickup 39900 dollars. The most advanced version worth 69900 USD accelerates from zero to 60 mph in 2.9 seconds. Its capacity is up to 3500 lbs (nearly 1600 kg). All versions are equipped with an autopilot and automatic Parking. Musk highlighted the phenomenal power Cybertruck, showing a video in which he easily drags a powerful pickup truck Ford F150, which is trying to go in a different direction.

pre-Orders for Cybertruck, the company had opened on its website, but its production will only start in 2021.

Primary market sales of full-size pickups, the United States, in the year it sold more than 2 million of these machines. And in this market there is a fierce competition between the leaders of the sector: Ford, General Motors and Fiat owned Chrysler brand Ram. The average price per vehicle — $ 50,000. Electropica Rivian more expensive than 69,000 dollars. What place in this business is a Tesla?

"I Have no idea about how the market will look like pickups on the motors. Who will buy them? Will it be those who bought Ford F-150, Ram vans, and Chevrolet Silverado for work tasks? Or perhaps buyers will be those who wish to acquire a truck, but do not want to mess with gasoline or diesel engine to his car just to assert his high status?", — does not hide the confusion Michelle Krebs, senior analyst of the consulting firm Autotrader from Detroit.

Финансовая аналитика, прогнозы цен на сталь, железную руду, уголь и другие сырьевые товары. More news and analytics on Metallurgprom telegram channel - subscribe to get up-to-date market information and price forecasts faster than others.
Сomments
Add a comment
Сomments (0)
On this topic
Pre-order the new Tesla pickup Cybertruck made about 146 000 customers – Elon Musk
2021 will be the year of rapid development of private astronautics
Elon Musk contracted coronavirus, but doubts the reliability of the tests
Mother Elon musk helped his son to sell the Tesla in the new year's eve
Tesla releases "Long Range Plus" Model S with mileage without recharging 630 km
Cybertruck Tesla is made of the same alloy, which exploded on the eve Starship
Recommended:
China and Australia agree to improve bilateral relations
June car sales in China up 24%
Chinese steel mills to suspend several production lines in August
News Analytics
Индия готовится к отмене экспортных пошлин на сталь09-08-2022, 08:34
Russian metallurgists will need more than 10 years to replace imports of key09-08-2022, 07:23
China reduced steel exports in July by one million tons or 12%08-08-2022, 17:41
World steel prices have moved from a protracted fall to growth08-08-2022, 16:27
Ferrexpo's net profit in the first half of the year decreased by 88%03-08-2022, 10:20
The US market may begin a collapse in prices for thick sheet14-07-2022, 09:39
High iron ore shortage could halt metallurgy's green transition28-06-2022, 14:02
Price volatility hits global steel market27-06-2022, 19:28
Recovery in China could be key to rising global steel prices - MEPS24-06-2022, 14:00
Conflict in Ukraine spurs Europe's drive for clean energy03-06-2022, 12:14
Sign in with: