Prices for hot rolled steel in Europe is steadily growing

Europe is preparing for the stable growth of prices and demand for steel in the first quarter. remain the most competitive offers from Russia, which are much better than those from Asia. 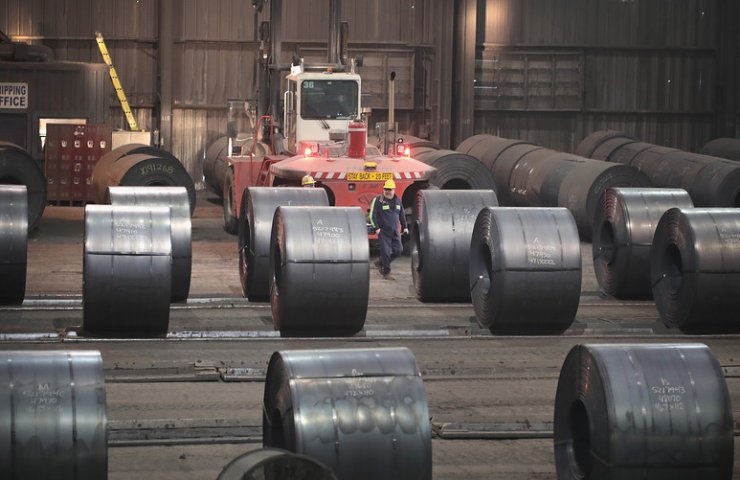 Prices for hot rolled coil (HRC) in North-Western Europe may rise slightly next week after local producers have informed customers about another potential price increase to 520 euros/ton from the factory.

Internal index of g/K roll from Argus in North-West Europe on Friday jumped by 6.25 euros to 449,25 euros, increasing the monthly average to 441,50 euros. February and March contracts was estimated at 460 and € 467,50 per ton, respectively.

Offer for Russian hot-rolled coil remained at the level of 455 euros per ton with delivery to the port of Antwerp, including customs clearance. It is certainly most competitive offer for foreign materials. Cold rolled steel coil Asian production was offered at a price of 540 euros per ton, and hot - at around 470-475 per ton.

the Majority of metallurgical enterprises of North-West Europe raised suggestions for hot-rolled steel in the range of 480-500 per ton, although some still hold more than low quotes, trying to determine how much they should increase.

However, in Germany there is still some concern about the prices on the leaves, especially in the South. The Italian market is apparently stabiliziruemost: service centers are concerned that they will have to pay more, as prices for the leaves are not growing, and demand is weak. Serbian HRC were offered to Italy at a price 465-470 per ton, on par or slightly above domestic levels.

Opinion has varied depending on the direction of the market. Some traders sold their positions, given the weak demand, the decline in scrap prices in Turkey and the increasing desire to sell from the factory do not deliver metal to the warehouse. Others still said that the proposal was 490 euros per tonne and higher, and the expected appreciation of domestic prices, given stable global situation, and rising prices in the Northwest Europe. Slab prices are also expected to grow in the next round of purchases that can spur the quotes of hot rolled steel.

Финансовая аналитика, прогнозы цен на сталь, железную руду, уголь и другие сырьевые товары. More news and analytics on Metallurgprom telegram channel - subscribe to get up-to-date market information and price forecasts faster than others.
Сomments
Add a comment
Сomments (0)
On this topic
ArcelorMittal will test the price of 520 euros per ton for hot rolled coil in Europe
Prices continue to rise in the long and flat steel markets
ArcelorMittal has raised prices for galvanizing for the European market to 900 euros per ton
Weakening demand will negatively affect quotations of steel raw materials
The demand for steel in India is growing with the growth of public expenditure
China unlikely to cut steel capacity in 2021 due to high steel prices
Recommended:
Sweden announced the discovery of Europe's largest deposit of rare earth metals
British Steel seeks financial support from the government to continue work
Norwegian startup to build €4bn green steel plant
News Analytics
War in Ukraine to accelerate world economy transition to clean energy - BP30-01-2023, 11:49
ArcelorMittal invests $120m in US green steel company30-01-2023, 11:11
The United States refused to comply with the decision of the WTO on tariffs on29-01-2023, 20:08
China remains the world leader in shipbuilding with a 50% share of new shipyard29-01-2023, 12:35
Prices for metal products in Ukraine increased by 26% last year29-01-2023, 12:06
S&P: Russia will continue to dominate the steel export market in the Black05-01-2023, 11:22
Fitch Analysts Predict Big Drop in Global Steel Consumption This Year14-12-2022, 13:59
Analysts predict 5% annual growth in the iron casting market through 203006-12-2022, 12:44
Commodity prices will fall, metals quotes will rise slightly - Focus Economics28-11-2022, 13:28
Platinum market to face shortage next year - WPIC22-11-2022, 18:25
Sign in with: