On Saturday, the Germans protested against the construction of girafarig Tesla on the outskirts of Berlin

the Protesters accused Elon musk that his factory will jeopardize water and wildlife in the area. 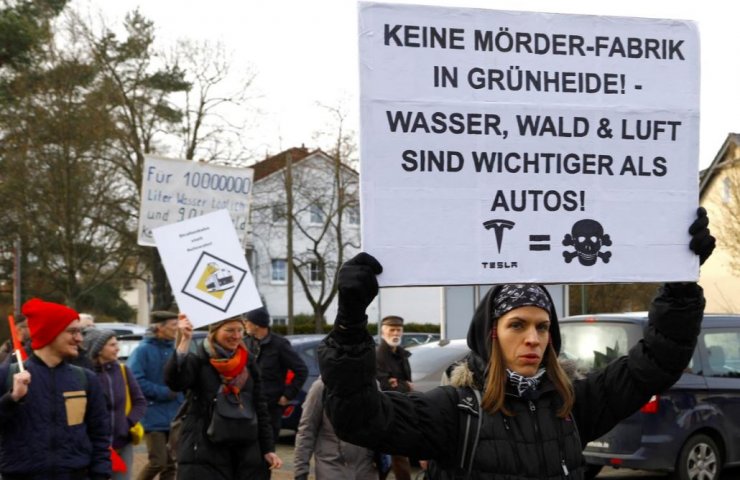 About 250 Germans came out to protest against the construction of a car plant Tesla in the German commune Grünheide after the Brandenburg water Association on Thursday warned of "serious problems with water supply and sewage" required to operate giavarini. "Tesla is stealing our water," the protesters chanted.

Ann Bach, a 27-year-old activist in the field of environmental protection, said that plans Tesla published earlier this month showed that it would require more than 300 cubic meters of water per hour, which will drain the already small water resources of the region.

Next to an environmental protest on the other side of the street, about 20 people put up their posters with a welcome label on which was written: "Tesla is our future".

Bernd Kutz, residing in Grünheide, told reporters that Tesla will improve in the region, create jobs and give chances to young people. "I'm here because I don't understand the protesters, who shout and show us the middle finger," said stubby. 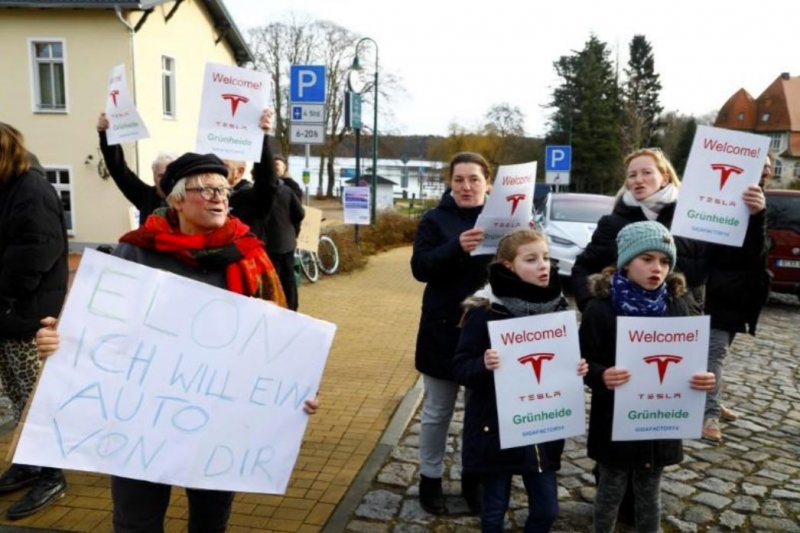 Protests by environmentalists in Germany previously stopped and arrested investment plans of major companies, among which later became the symbol of protests antiwhaling project lignite mining company RWE in Hambach forest, near Cologne.

Future European plant of the American company Tesla will build on the outskirts of Berlin near conservation areas. Two decades ago to build a company is planning a BMW, but in the end she chose Leipzig. Remembering loss of profits, commune administration quickly agreed to the offer by the company of billionaire Elon musk. "Investment is a unique opportunity. They will help young people with a good education to stay in our region. This option was not in previous years", — says the head of the commune Arne Christian.

the Construction of another plant in the country with the largest automobile market in Europe will be a major test for the company Mask, as the inhabitants of the region are more loyal to local brands. In addition, the labor cost in Germany is 50% higher than in the US and five times higher than in Poland, which is just an hour drive from Grünheide.

it is Planned that the European plant, the company will provide 12 000 jobs and will produce up to 500,000 cars a year. The company will launch in July 2021. This may be an additional risk of a major German car manufacturers Volkswagen, BMW and Daimler, which last year fell to the lowest level in 25 years.

Финансовая аналитика, прогнозы цен на сталь, железную руду, уголь и другие сырьевые товары. More news and analytics on Metallurgprom telegram channel - subscribe to get up-to-date market information and price forecasts faster than others.
Сomments
Add a comment
Сomments (0)
On this topic
Employees of the Nissan plant in Barcelona lit candles on their jobs (Video)
Europe's aerospace industry will take years to recover from a pandemic - Fitch
The Duke and Duchess of Cambridge visited the steel plant Tata Steel
Rolls-Royce Receives £ 400 Million for Mini Nuclear Reactor Project
Elon Musk will invest in the factory in Berlin 4.4 billion euros
Half of the profits from the sale of British Steel will get accountant Ernst & Young
Recommended:
Denmark to replace gas heating in homes to reduce dependence on Russia
Severstal has taken the first step towards delisting on Western exchanges
Ministry of Energy of Ukraine presented developments on the development of hydrogen energy to European partners
News Analytics
Lithium mining in Chile's Atacama sparks controversy over flamingo habitat20-05-2022, 12:33
Europeans have sharply reduced the purchase of new cars20-05-2022, 08:34
Installed renewable energy capacity in China skyrockets in first four months of20-05-2022, 08:18
Martina Merz will continue to lead the German ThyssenKrupp until March 202820-05-2022, 08:50
European metallurgists criticized the plans of the European Commission to20-05-2022, 08:02
US steel market sentiment becomes more price neutral05-05-2022, 10:15
The global high-strength steel market will grow steadily by 5% annually for the04-05-2022, 08:45
China steel inventories hit 13-month high amid COVID-19 outbreak30-04-2022, 16:38
Slowdown in global auto sector affects steel prices27-04-2022, 12:36
World alumina production reaches a record 138 million tons21-04-2022, 09:54
Sign in with: