German industrial group intends to use cash flow to the extent necessary to reduce debt and reduce structural costs. In particular, funded pension obligations of the company. 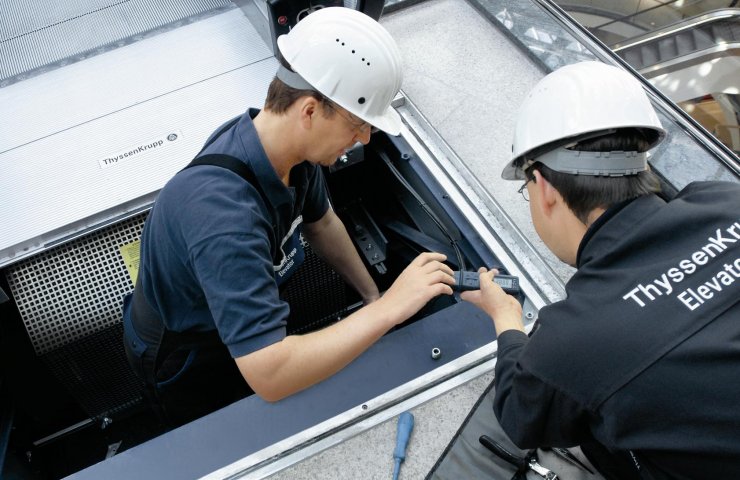 the Largest steel company of Germany, ThyssenKrupp AG, completely sells the business of manufacturing of Elevator technology to the consortium led by Advent funds, Cinven and RAG. The relevant decision of the Executive Board was approved Thursday night by the Supervisory Board, saying in a press release of the company.

"Agreement of purchase and sale is signed. The closing of the transaction is expected by the end of the current fiscal year. The purchase price amounts to 17.2 billion euros," - said in ThyssenKrupp.

the Deal is subject to approval by the competition authority of the EU. ThyssenKrupp does not expect that the authorities will have any reservations.

Proceeds from the sale of the money will remain on the company's balance sheet and will be used for the development of the remaining units.

"We not only got very good selling price, but also can quickly complete the transaction. Now it is imperative for us to find the best possible balance for the use of funds. We will reduce the debt ThyssenKrupp extent necessary, and at the same time, to invest as much as is reasonable, in the company's development," said Martina Merz, CEO of ThyssenKrupp.

In the course of negotiations with employee representatives and trade Union IG Metall, buyers of Elevator business has provided employment security, reported the press service of ThyssenKrupp. In addition, it was agreed that the buyers will continue to manage the business as a global group. The main office will remain in Germany.

Earlier it was reported that because of the differences in the strategy of development of the steel division, the Supervisory Board was replaced by Director of Thyssenkrupp Steel Europe. Zarabativali last days Premal Desai planned over the next five years to spend on upgrading metallurgical equipment additional € 800 million.

This would allow Thyssenkrupp to solve the problem of backlog is the quality of steel in Europe. According to analysts, at present the company can't afford these investments. However, the financial crisis should be resolved as a result of sale of division on manufacture of Elevator equipment.

Recommended:
Interpipe starts supplying pipe products to Qatar Petroleum
Industrial visa-free will be scaled to all industries - Minister Petrashko
Zaporozhtransformator resumes deliveries to Argentina
On this topic
The Swiss manufacturer of elevators challenged the sale of Elevator division Thyssenkrupp
Martin Merz Thyssenkrupp dreams about consolidation in the steel industry of Europe
Thyssenkrupp refuses to dividends and are waiting for further fall in profits
Voestalpine reported a sharp reduction in income
German giant Thyssenkrupp resigns from blue-chip status
Is the German auto industry preparing for a collapse?
Add a comment
Сomments (0)
News Analytics
Georgia's economy shrinks by 11.5% in January26-02-2021, 21:21
Ukraine retained its position in the world ranking of steel producers and rose26-02-2021, 15:52
ArcelorMittal has raised prices for galvanizing for the European market to 90026-02-2021, 13:23
The European Commission initiated a new investigation on steel imports to26-02-2021, 13:22
A rally of workers of the stopped shipyard was held in Mariupol26-02-2021, 12:34
Increase in prices is forecasted in the markets of steel raw materials -26-02-2021, 09:25
Troy ounce of gold will drop $ 500 in two years - Fitch25-02-2021, 18:29
Global iron ore production growth to outstrip cumulative production in India23-02-2021, 10:22
Fitch Ratings Warns of “Shocking Impact” on Fossil Fuel Exporters18-02-2021, 14:44
Raw material prices rise by about 10.5% in January 2021 - Deutsche Industriebank12-02-2021, 10:48
Sign in with: