UK authorities prepare for a food collapse worse than a pandemic

Supermarkets and ministers are very concerned about shopping panic. They saw what happened during the coronavirus pandemic, when people started buying up rolls of toilet paper, and now they know how quickly things can go wrong if the UK cannot negotiate with the EU. 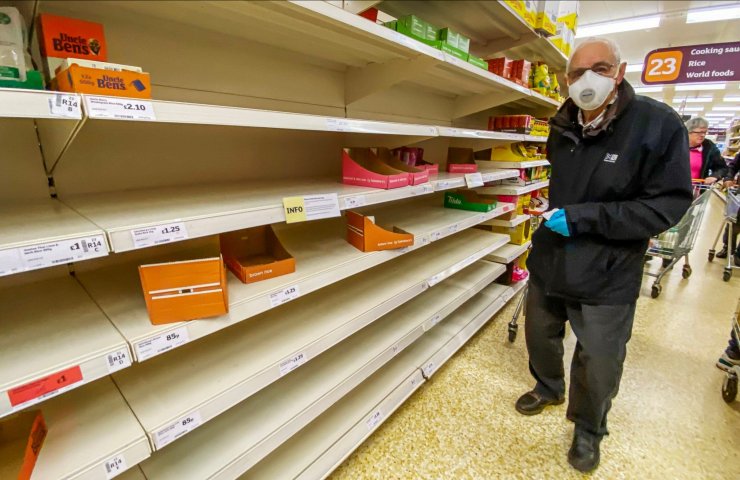 UK emergency planners predict that the abandonment of the United Kingdom's deal with the EU will trigger panic food purchases on a scale that could dwarf the coronavirus crisis. About this on Sunday writes by The Sunday Times.

A UK exit from the EU without a deal is possible if London and Brussels fail to agree on a new trade agreement by the end of the year. In this case, the UK government has recommended stores and supermarkets to stockpile groceries.

Food manufacturers have warned that there will be a shortage of vegetables within three months, and supermarkets have already warned the authorities about a possible shortage. At the same time, the UK Department of Health instructed drug providers to create a reserve of drugs for the next six weeks.

Negotiations on a UK-EU trade agreement resumed in early December. The parties have repeatedly stated their disagreements. A senior British official told The Sunday Times that the chances of signing an agreement are now less than 20%.

Today, December 13, British Prime Minister Boris Johnson and the head of the European Commission Ursula von der Leyen will hold regular talks. At them they must decide whether it makes sense to continue negotiations on Brexit.

Recommended:
ArcelorMittal Kryvyi Rih put into operation a new locomotive EffiShunter 1600
KAMAZ intends to double the production of electric buses
Chinese automaker Chery's exports grow 18.7% in 2020
On this topic
Europeans agreed with the Chinese not to steal other people's geographical names
Euronews: COVID-19 in Italy may cause social unrest, looting and violence
The deficit in Britain: the Brits are stocking up before Brexit
Liberty Steel CEO writes letter to Financial Times
Is the German auto industry preparing for a collapse?
Will the UK government interfere with British Steel?
Add a comment
Сomments (0)
News Analytics
In 2021, Ukrzaliznytsia plans to repair more than 300 locomotives for UAH 426-01-2021, 15:30
Ukraine has enough "metals of the future" for the development of innovative26-01-2021, 14:40
High-speed railway line will connect the south of Kazakhstan and the capital of26-01-2021, 14:27
In 2021, an analogue of the US Department of Defense Research Projects Office26-01-2021, 11:24
Turkey plans to produce 100 tons of gold annually26-01-2021, 11:15
China will overtake the United States to become the world's largest economy in27-12-2020, 12:04
The shortage in the US steel market will last at least until the end of the25-12-2020, 11:36
Steel production in China to surpass one billion tons this year23-12-2020, 10:59
Iron ore prices hit seven-year high and continue to rise15-12-2020, 10:26
Prices for metallurgical raw materials continue to rise in regional markets10-12-2020, 11:32
Sign in with: