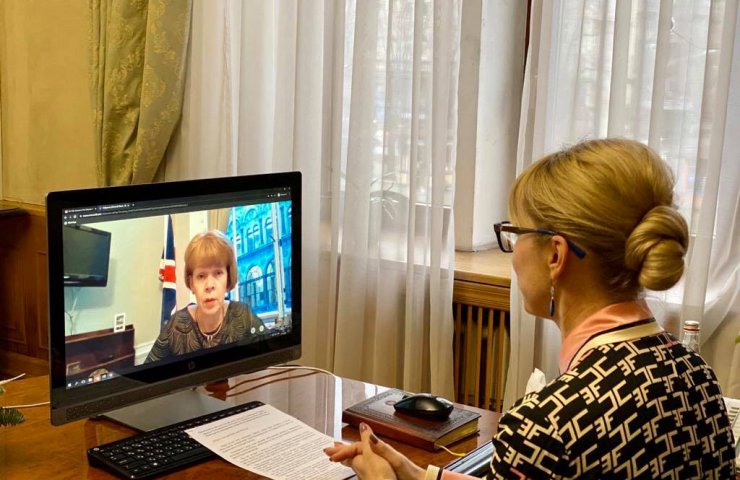 An online meeting took place today between the First Deputy Minister of Energy of Ukraine Olga Buslavets and the head of the Office for Commonwealth and Development of Nations of Great Britain at the British Foreign Office Wendy Morton.

During the meeting, they discussed the priority areas of cooperation between Ukraine and the UK.

Now there is a process of coordination with the British Embassy to support the development of a new energy strategy for Ukraine until 2050 by the British government. The new strategy will be developed on the basis of a low-carbon energy sector development model, decarbonization, taking into account the European Green Deal.

Ukraine's desire to decarbonize the economy and strengthen its participation in the global fight against climate change was recently declared by Ukrainian President Volodymyr Zelenskyy during his speech at the international summit of climate ambitions.

The Department of Energy said it is making significant efforts in this direction. The preparation of the second National Determined Contribution to the Paris Agreement on Climate is now being finalized and the development of an Integrated Energy and Climate Plan 2030 is ongoing.

“Ukraine will soon join the coalless alliance. We plan to gradually reduce the number of coal mines and by 2070 eliminate the use of fossil fuels, acquiring complete climate neutrality. It is important to accompany the transformation of coal regions by creating new economic incentives so that new competitive clusters, new innovative and technological industries appear on the basis of coal industry enterprises, ”Olga Buslavets said.

She expressed gratitude to the Foreign Office and the UK government for their support and attention to the energy sector in Ukraine and called for closer and more fruitful cooperation.

The Coalless Alliance was founded by the UK and Canada in 2017 to phase out coal mining by 2030 in the EU and the Organization for Economic Cooperation and Development and worldwide by 2050.

Recommended:
China Manufacturing PMI Falls In December But Stays Above 50
Eurasian Commission has extended import duties on Ukrainian stainless pipes
Permission to launch drones in Ukraine can be obtained on the Internet
On this topic
Ukraine will reduce greenhouse gas emissions by 58-64% by 2030 - Zelensky
The Ministry of Energy of Ukraine outlined the prospects for the development of hydrogen energy
Reform of the coal industry in Ukraine will be "gradual and balanced"
Ukraine will continue the strategy of development of renewable energy sources in the new environment
Stopped nuclear power plants and mines. What's going on in the energy sector of Ukraine?
"Green transition" of Ukraine provides for the rejection of coal and nuclear energy reduces
Add a comment
Сomments (0)
News Analytics
From 2030, all new Boeing jets will be able to refuel from household waste24-01-2021, 18:56
Polish President urged the European Union to strengthen sanctions against Russia24-01-2021, 15:14
Trump's legacy - carmakers shut down factories over Chinese chip shortages24-01-2021, 12:05
Adviser to the President of Ukraine: We expect 2021 to be a year of economic24-01-2021, 11:52
11 miners rescued from exploding gold mine in China on January 1024-01-2021, 11:05
China will overtake the United States to become the world's largest economy in27-12-2020, 12:04
The shortage in the US steel market will last at least until the end of the25-12-2020, 11:36
Steel production in China to surpass one billion tons this year23-12-2020, 10:59
Iron ore prices hit seven-year high and continue to rise15-12-2020, 10:26
Prices for metallurgical raw materials continue to rise in regional markets10-12-2020, 11:32
Sign in with: