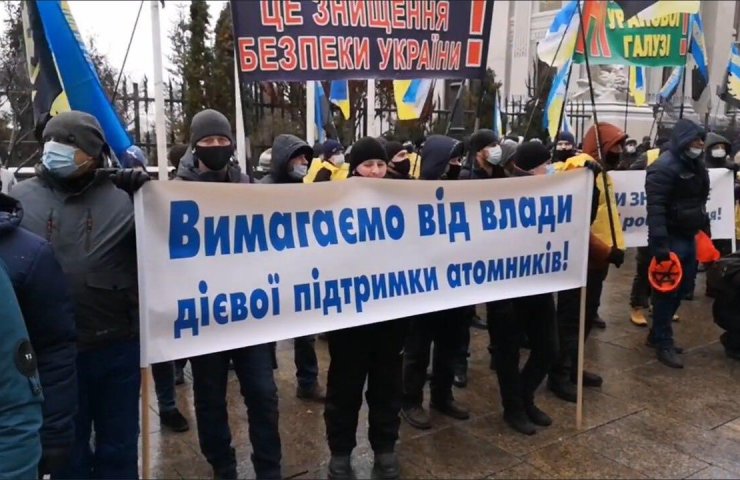 On December 21, the labor collectives of the uranium mines "Smolinskoye", "Novokonstantinovskaya" and "Ingulskaya" (part of the SE "VostGOK") begin an indefinite protest action. As explained by the Chairman of the Independent Trade Union of Miners of Ukraine Mykhailo Volynets, the workers of the only uranium mining enterprise in Ukraine are going to block the routes in the Kirovograd region in protest against the withdrawal of the enterprise into downtime, against the accumulation of wage arrears.

Let us remind you that since December 7, the structural divisions of SE "VostGOK" have been put into standby mode.

The company notes that the idle mode was introduced due to systematic delays in money from the State Enterprise "NNEGC" Energoatom ".

NNEGC Energoatom stated that they do not recognize the claims of SE VostGOK regarding the company's untimely payments for uranium concentrate, which NNEGC purchases in accordance with a long-term agreement concluded in November 2019.

The union said that the suspension of the mines will lead to the bankruptcy of the enterprise in early 2021, as well as to an environmental disaster in the region.

Vostochny Ore Mining and Processing Plant is the only enterprise in Ukraine that ensures the extraction of natural uranium and the production of its oxide concentrate. Part of the State Concern Nuclear Fuel. VostGOK employs about 5,000 people, part of the staff are uranium miners.

Recommended:
Kiay cuts subsidies to electric vehicle manufacturers
Russia will start producing "green" hydrogen
Max Polyakov's Firefly Aerospace plans two launches of the Alpha space rocket in 2021
On this topic
VostGOK workers blocked three highways protesting against non-payment of wages
Uranium problems: Ukraine may lose its own production
Workers of the only uranium mining enterprise in Ukraine protest
Terms of cooperation with Energoatom cannot be called constructive - head of VostGOK
In Luhansk region the miners refused to come to the surface
Miners go to Kiev to protest: will demand a billion hryvnia
Add a comment
Сomments (0)
News Analytics
From 2030, all new Boeing jets will be able to refuel from household waste24-01-2021, 18:56
Polish President urged the European Union to strengthen sanctions against Russia24-01-2021, 15:14
Trump's legacy - carmakers shut down factories over Chinese chip shortages24-01-2021, 12:05
Adviser to the President of Ukraine: We expect 2021 to be a year of economic24-01-2021, 11:52
11 miners rescued from exploding gold mine in China on January 1024-01-2021, 11:05
China will overtake the United States to become the world's largest economy in27-12-2020, 12:04
The shortage in the US steel market will last at least until the end of the25-12-2020, 11:36
Steel production in China to surpass one billion tons this year23-12-2020, 10:59
Iron ore prices hit seven-year high and continue to rise15-12-2020, 10:26
Prices for metallurgical raw materials continue to rise in regional markets10-12-2020, 11:32
Sign in with: