Miners blocked three roads of national importance in protest against the suspension of uranium mines and non-payment of wages. 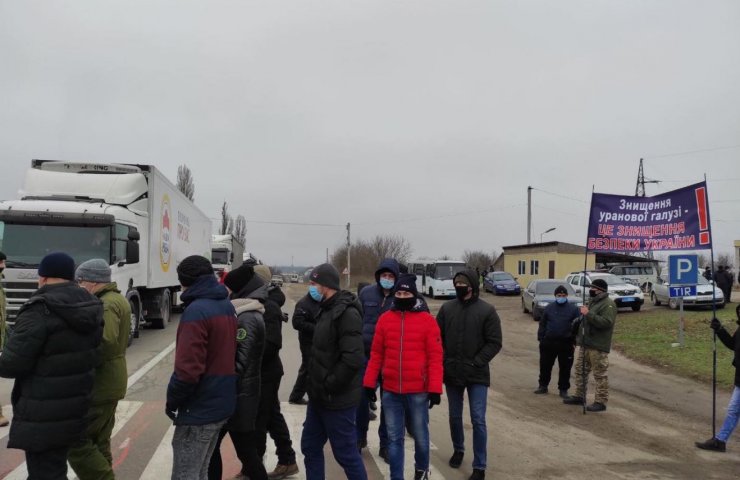 In the Kirovograd region, the protest action of the workers of the Smolinskoe, Novokonstantinovskaya and Ingulskaya mines, which produce uranium ore, continues at the Zheltovodsky site.

"The state enterprise" VostGOK "has been put into idle mode, 5,000 people may remain on the street," said Mikhail Volynets, chairman of the Independent Trade Union of Miners of Ukraine.

The protesters appeal to the Ukrainian authorities with two demands: to pay off UAH 143 million in wage arrears and to ensure the sustainable operation of the structural units of the VostGOK uranium mines.

The miners blocked three highways: Kropyvnytskyi-Kiev, Kropyvnytsky-Nikolaev and Kropyvnytsky-Kryvyi Rih. Only ambulances, cars with children and the elderly, minibuses and intercity services are allowed in.

Previously, the administration of the Vostochny Ore Mining and Processing Plant, the only enterprise in Ukraine that ensures the extraction of natural uranium and the production of its oxide concentrate, announced about the coordination of key issues with the State Executive Service on unblocking the plant's accounts and paying off wage arrears by November 30.

However, already on December 7, the enterprise brought the Smolinskaya, Ingulskaya and Novokonstantinovskaya mines to a simple mine. The trade union said that the suspension of the work of the mines will lead to the bankruptcy of the state enterprise "VostGOK" in early 2021, as well as to an environmental disaster in the region.

Recommended:
Energomashspetsstal successfully handed over to the customer 8 covers for the steam generators of the Akkuyu NPP
Hot rolled sheet prices in the US topped $ 1,000 per ton for the first time in history
Stainless steel rises in price on the international market
On this topic
Uranium problems: Ukraine may lose its own production
Terms of cooperation with Energoatom cannot be called constructive - head of VostGOK
The number of striking underground miners of KZHRK increased to 62 people
In Luhansk region the miners refused to come to the surface
Miners go to Kiev to protest: will demand a billion hryvnia
The Independent Trade Union of Miners of Ukraine decided to prepare for an all-Ukrainian protest
Add a comment
Сomments (0)
News Analytics
In 2021, Ukrzaliznytsia plans to repair more than 300 locomotives for UAH 426-01-2021, 15:30
Ukraine has enough "metals of the future" for the development of innovative26-01-2021, 14:40
High-speed railway line will connect the south of Kazakhstan and the capital of26-01-2021, 14:27
In 2021, an analogue of the US Department of Defense Research Projects Office26-01-2021, 11:24
Turkey plans to produce 100 tons of gold annually26-01-2021, 11:15
China will overtake the United States to become the world's largest economy in27-12-2020, 12:04
The shortage in the US steel market will last at least until the end of the25-12-2020, 11:36
Steel production in China to surpass one billion tons this year23-12-2020, 10:59
Iron ore prices hit seven-year high and continue to rise15-12-2020, 10:26
Prices for metallurgical raw materials continue to rise in regional markets10-12-2020, 11:32
Sign in with: