The State Service of Geology and Mineral Resources of Ukraine and the Eastern Mining and Processing Plant held a working meeting. 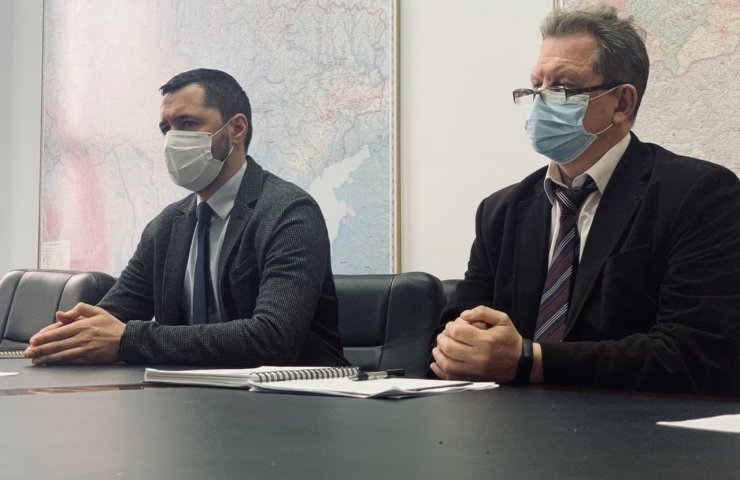 As part of the dialogue that the State Service of Geology and Subsoil of Ukraine systematically conducts with subsoil users, a working meeting was held between the head of the Service Roman Opimakh and the heads of the Eastern Mining and Processing Plant (SE "VostGOK").

The parties discussed problematic issues in the work of the enterprise and the risks that subsoil users face in their activities.

“Gosgeonedra is constantly updating and improving services for existing subsoil users and potential investors. Direct dialogue with business is an important part of our work, as it gives us an understanding of how else we can improve the mechanisms of the mining sector in Ukraine, simplify the work of the miner, "commented Roman Opimakh, Chairman of the State Geological Survey.

Representatives of the only uranium mining enterprise in Ukraine shared with the head of the service plans for the next year, told about the resumption of the enterprise and the increase in production.

As a reminder, on January 12, SE "VostGOK" resumed the work of a number of departments and exited the idle mode, which started in early December last year.

The State Enterprise "Vostochny Mining and Processing Plant" (SE "VostGOK") was established in 1951 and remains the only enterprise in Ukraine that ensures the extraction of natural uranium and the production of its oxide concentrate. Vostochny Ore Mining and Processing Plant is one of 28 uranium mining centers in the world, among which it is in the top ten, and is also the largest in Europe.

Recommended:
Ukraine and the European Union deepen cooperation on the production of lithium-ion batteries
Uranium mining company of Ukraine will develop a program to ensure competitiveness
China starts digital transformation of the country's coal industry
On this topic
Ukraine has enough "metals of the future" for the development of innovative technologies -
The head of the State Geological Survey of Ukraine offered ArcelorMittal Kryvyi Rih deposits of
SE "VostGOK" will not return to operation uranium mines from January 4, 2021
Uranium problems: Ukraine may lose its own production
Ukraine can fully provide itself with uranium and hydrocarbons - Roman Opimakh
Shakhta imeni Artema will continue to produce iron ore for "ArcelorMittal Kryvyi Rih"
Add a comment
Сomments (0)
News Analytics
ArcelorMittal has raised prices for galvanizing for the European market to 90026-02-2021, 13:23
The European Commission initiated a new investigation on steel imports to26-02-2021, 13:22
A rally of workers of the stopped shipyard was held in Mariupol26-02-2021, 12:34
State Energy Efficiency together with UNECE and stakeholders discussed the26-02-2021, 11:36
Corum Group presented the company's development strategy until 203026-02-2021, 10:04
Increase in prices is forecasted in the markets of steel raw materials -26-02-2021, 09:25
Troy ounce of gold will drop $ 500 in two years - Fitch25-02-2021, 18:29
Global iron ore production growth to outstrip cumulative production in India23-02-2021, 10:22
Fitch Ratings Warns of “Shocking Impact” on Fossil Fuel Exporters18-02-2021, 14:44
Raw material prices rise by about 10.5% in January 2021 - Deutsche Industriebank12-02-2021, 10:48
Sign in with: