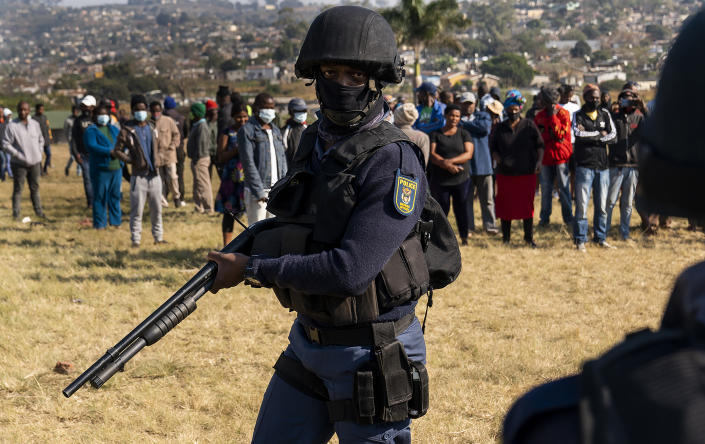 Port, rail and road transport in South Africa has been disrupted by ongoing civil unrest and violence, and several force majeure notices have been issued affecting the transport of mined raw materials.

The riots followed the imprisonment of former President Jacob Zuma and the subsequent rejection of his release by the country's Supreme Court on July 9. Since then, protests have escalated into massive looting, violence and destruction, mainly in the provinces of KwaZulu-Natal and Gauteng.

During the riots, at least 800 retail stores were looted, 2,500 people were arrested and more than 200 were killed in the clashes. In the eastern port of Durban, rebels attacked industrial areas, devastated warehouses and factories, and then set them on fire.

Impala Platinum (Implats), the world's third-largest platinum producer, said on July 14 that the riots have not had a significant impact on its operations to date.

At the same time, Implats Group Executive Director for Corporate Affairs, Johan Theron, said that the port infrastructure in Durban and the N3 road corridor, which connects Durban with the hinterland of South Africa, is critical to the supply of fuel and chemicals to the entire mining industry in South Africa.

Chika Edeh, head of investor relations at South African vanadium producer Bushveld Minerals, said that “the turmoil has not yet affected our operations or our supply chain.

By the most conservative estimates, the total damage to the South African economy already exceeds $ 350 million. President Cyril Ramaphosa said the country was facing the worst outbreak of violence in the history of the state.

Финансовая аналитика, прогнозы цен на сталь, железную руду, уголь и другие сырьевые товары. More news and analytics on Metallurgprom telegram channel - subscribe to get up-to-date market information and price forecasts faster than others.
Сomments
Add a comment
Сomments (0)
On this topic
Working the world's largest copper mine joined the protests in Chile
New gold rush begins in South Africa due to coronavirus pandemic
How South African mines deal with power outages
South African producers of ferro-alloys're preparing for a tough beginning of 2020
The largest gold mining enterprise in Kyrgyzstan announced an attempt to seize the deposit
Metinvest: the Enterprise became a victim of circumstances, but it remains a good taxpayer
Recommended:
British scientists have found a way to cut CO2 emissions from steel production by 90%
Analysts confident of significant growth in global demand for galvanized steel
Europe's passenger car market records its worst year since the turn of the century
News Analytics
The United States refused to comply with the decision of the WTO on tariffs on29-01-2023, 20:08
China remains the world leader in shipbuilding with a 50% share of new shipyard29-01-2023, 12:35
Prices for metal products in Ukraine increased by 26% last year29-01-2023, 12:06
JSW Steel, ArcelorMittal and NLMK may buy two Liberty Steel plants in Belgium29-01-2023, 12:12
British scientists have found a way to cut CO2 emissions from steel production28-01-2023, 23:49
S&P: Russia will continue to dominate the steel export market in the Black05-01-2023, 11:22
Fitch Analysts Predict Big Drop in Global Steel Consumption This Year14-12-2022, 13:59
Analysts predict 5% annual growth in the iron casting market through 203006-12-2022, 12:44
Commodity prices will fall, metals quotes will rise slightly - Focus Economics28-11-2022, 13:28
Platinum market to face shortage next year - WPIC22-11-2022, 18:25
Sign in with: