A meeting of many thousands is taking place near the Congress building, the participants of which demand a revision of the results of the US presidential elections. 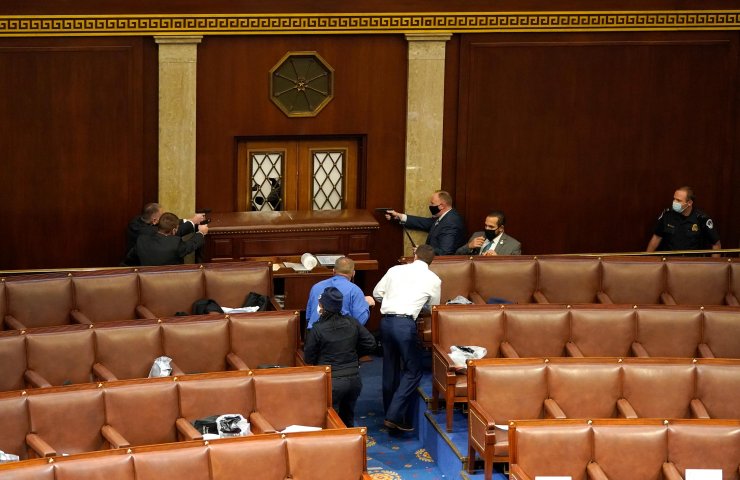 Washington DC will have a curfew from 6:00 pm today, Mayor Muriel Bowser said on Twitter. It will run until 6:00 am Thursday morning.

Today, I 'm ordering a citywide curfew for the District of Columbia from 6:00 p.m. on Wednesday, January 6, until 6:00 a.m. on Thursday, January 7. pic.twitter.com/lp6Pt3DcYC

Supporters of the current US President Donald Trump broke into the congress building and surrounded the conference room, Senator Lankford reported on Twitter. Debate in Congress on the summing up of the presidential election has been interrupted.

The police recommended that congressmen take refuge where they are, which caused a wave of outrage among parliamentarians.

Vice President Mike Pence has been evacuated from the Capitol. The Electoral College certification vote was suspended after protesters stormed the building.

Congressman Adam Kinzinger, a Republican from Illinois, tweeted that this is an "attempted coup." He also condemned the actions of the protesters in a series of tweets and responded directly to President Trump. "You are not defending the country," Kinzinger tweeted to Trump.

You are not protecting the country. Where is the DC guard? You are done and your legacy will be a disaster. https://t.co/7jWYWE7TVj

An armed confrontation takes place at the front door of the Congress building, and police officers point their pistols at anyone trying to get to the front door.

Charles Ramsey, former chief of the DC Metropolitan Police Force, called the capture of the Capitol by the protesters "as close to an attempted coup d'etat as this country has ever seen."

Recommended:
Bitcoin value surpassed $ 30,000 for the first time
Ukrainian SMG will lengthen 6 Dutch ships by 12 meters
Gazprom starts gas supplies to Serbia and Bosnia via the Turkish Stream pipeline
On this topic
Washington may cancel the portion of the tariff on metals in the fight against the coronavirus
The US imposed a life full provision for 100,000 the American the miners
Mother Elon musk helped his son to sell the Tesla in the new year's eve
Amazon's black streak: the 10 billion Pentagon contract goes to Microsoft
Trump punishes Turkey for attack on Syria with 50% steel duties
Steel trade war costs US companies $ 11.5 billion a year
Add a comment
Сomments (0)
News Analytics
Ukraine failed to prove dumping by Russian aluminum wheel manufacturers21-01-2021, 17:03
Ukrzaliznytsia acquired 28 new passenger cars in 2020 and repaired 140621-01-2021, 16:21
Mariupol commercial port showed a rare video of the snow-covered Azov sea21-01-2021, 14:25
The head of the State Geological Survey of Ukraine offered ArcelorMittal Kryvyi21-01-2021, 13:07
Ukrainian consumers increased purchases of rolled metal products by 4.4% in 202021-01-2021, 13:42
China will overtake the United States to become the world's largest economy in27-12-2020, 12:04
The shortage in the US steel market will last at least until the end of the25-12-2020, 11:36
Steel production in China to surpass one billion tons this year23-12-2020, 10:59
Iron ore prices hit seven-year high and continue to rise15-12-2020, 10:26
Prices for metallurgical raw materials continue to rise in regional markets10-12-2020, 11:32
Sign in with: