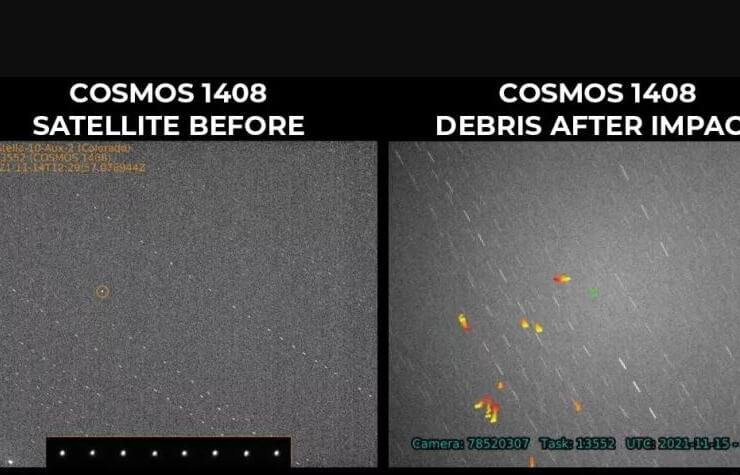 On Monday (November 15), the Russian Defense Ministry launched an anti-satellite missile (ASAT), destroying one of its own satellites and creating a space debris cloud that threatens astronauts on the International Space Station. While other countries, including Russia, had conducted ASAT tests before, this test was very different.

Over the years, several countries, including the United States, have developed and tested ASAT technology. In 2007, China launched an ASAT rocket, and India conducted the first ASAT test in 2019. In 2020, Russia launched two anti-satellite missiles.

But Monday's test was different. This was the first test that was actually "intercepted," meaning that the test mission actually hit a satellite and destroyed it, says space policy expert Brian Wieden, director of program planning for the Secure World Foundation

In earlier tests of the same anti-satellite defense system, Russia aimed its weapons at an “imaginary point in space,” as astrophysicist Jonathan McDowell of the Harvard-Smithsonian Center for Astrophysics in Cambridge explains.

Russia has taken an unexpected interception step, a step that continues to endanger the seven inhabitants of the space station (including two Russian cosmonauts) and will have repercussions for years to come. But the trial had other features as well.

“They destroyed a fairly large satellite,” McDowell said, referring to the Cosmos 1408 satellite weighing about 3,860 pounds (1,750 kg). “This is most of the targets used.”

“There's really no reason they should have used such a big target,” McDowell said. "They could use a smaller target and generate less garbage." In addition, although the ASAT test in Russia was conducted at a lower altitude than the test in China, it took place at a much higher altitude than the ASAT tests conducted by India and the United States.

The implication of this is that orbital debris will remain in orbit for a period of time, McDowell said, adding that debris from this test is likely to remain in orbit for many years. He estimates that most of the material will fall within about five years, and there is still debris in orbit from old Soviet tests over 50 years ago.

Experts expect this debris to continue to pose problems for satellites in orbit, as well as astronauts living on the space station.

This test was the first of its kind for Russia, but the question arises, will they conduct other similar tests?

“That's a great question. How many tests do they need to do? " McDowell said. “It depends on whether they plan to seriously deploy this system online,” he said, adding that the US reaction to the event and the political engagement between the two countries is likely to have repercussions. But, “if they do plan to use the operating system, you can expect them to do so (do the ASAT hooking test) multiple times,” he said.

Финансовая аналитика, прогнозы цен на сталь, железную руду, уголь и другие сырьевые товары. More news and analytics on Metallurgprom telegram channel - subscribe to get up-to-date market information and price forecasts faster than others.
Сomments
Add a comment
Сomments (0)
On this topic
Russia defends anti-satellite test amid US criticism
Yuzhmash told whether it is possible to launch reusable rockets from the Black Sea
The historical path from the Energia-Buran project to the Zenit space rocket complex
Strategy of defense in space
SpaceX launches 60 more satellites for its broadband internet project
Ukrainian-powered Antares launch vehicle successfully launched from Wallops cosmodrome
Recommended:
Brazil has increased steel exports to Europe by eight times against the backdrop of the war in Ukraine
Ferrexpo's net profit in the first half of the year decreased by 88%
Evraz decided to get rid of its assets in the US and Canada
News Analytics
POSCO Expands Collaboration with Global Iron Ore Supplier Vale on Mild Steel19-08-2022, 11:33
Droughts affect Europe's hydropower market, exacerbating energy crisis19-08-2022, 11:37
Rosneft transfers refineries to its own catalysts17-08-2022, 10:55
ArcelorMittal Temirtau signed a Memorandum to ensure industrial safety17-08-2022, 10:26
British metallurgists raise steel prices again due to rising energy prices17-08-2022, 10:12
UBS raises global LFP battery market share forecast to 40% by 203017-08-2022, 11:26
Automotive steel market to exceed $161.75 billion by 203015-08-2022, 14:34
The US market may begin a collapse in prices for thick sheet14-07-2022, 09:39
High iron ore shortage could halt metallurgy's green transition28-06-2022, 14:02
Price volatility hits global steel market27-06-2022, 19:28
Sign in with: