Уилбур Росс: Поставки трансформаторной стали в США угрожают национальной безопасности
A leading metallurgical company in the world suspends dividend payments
The largest investment Fund in the world has sold the shares of mining companies
The United Arab Emirates has banned the export of scrap metal from the country from may 15
ArcelorMittal plans to issue additional shares to two billion dollars due to pandemic
Popular
AvtoKrAZ auctioned ...25-05-2020, 20:05
On "Azovstal" was taken from the ...24-05-2020, 11:15
The Dnieper metallurgical plant ...25-05-2020, 20:32
Employees of the Nissan plant in ...27-05-2020, 13:13
Trump has postponed a summit of the G-7 ...31-05-2020, 09:46

Hyundai Motor Co. was forced to suspend production of cars in South Korea a week ago due to the lack of components that come from within the fashion industry, China. 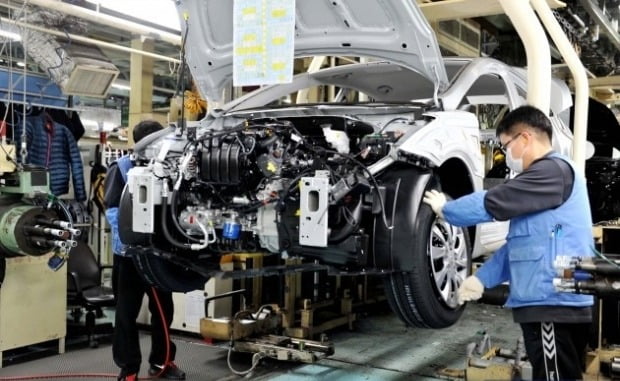 Hyundai Motor and Kia Motors to resume and gradually increase the production of cars in South Korea since 11 February, said in a statement on Monday.

Hyundai last week became the first global automaker, which halted production outside of China due to the outbreak of coronavirus, violated the supply of parts from China.

Earlier on Monday the representative of the trade Union of Hyundai Motor said that component suppliers have resumed production in China on Monday and it is expected that most of the plants of the automaker in South Korea will resume production in the period from 11 to 17 February.

"the company will operate in accordance with the status of supply of spare parts," - said in a statement.

Previously, a Kia spokesman said the automaker has suspended most production at its three automotive plants in South Korea on Monday due to a lack of spare parts.

According to officials, most of the production in the factories Kia's Gwangju Sahari will be suspended Monday and Tuesday, adding that the company will monitor the availability of spare parts to determine whether to resume production after that.

on Monday, Chinese factories resumed production across China as the government has lifted some restrictions on working during the epidemic of the coronavirus, which has killed more than 900 people. The death toll in Sunday amounted to 97 people and was the largest in one day since the beginning of the epidemic in December 2019.

Earlier it was reported that in 2020, the Hyundai Motor Group Chairman Mr Chung Mong Koo (Mong-Koo Chung) will be accepted into the Automotive Hall of fame, which is the highest recognition of service to the industry.

Mr. Chung will become the first Korean citizen – a member of the open in 1939, the Automotive Hall of fame, which includes about 800 business leaders from around the world. The official ceremony will take place on 23 July 2020 in Detroit.

Recommended:
In the first quarter, Ukraine paid for the import of vehicles by almost a billion dollars
Copper prices reached 8-week high on growing demand in China
The net loss of German industrial group ThyssenKrupp made up 1.31 billion euros
On this topic
Toyota has extended the quarantine at its factories in China until 17 February
On "KAMAZ" has created a headquarters to counter the economic risks of the spread of coronavirus
Ford Motor and Toyota Motor have stopped their conveyors in China until February 10
Немецкий автопром готовится к обвалу?
POSCO и Hyundai Steel потеряют до 30 процентов прибыли из-за роста цен на руду
КIA в сотрудничестве с Hyundai хочет создать недорогой электромобиль для Индии
Add a comment
Сomments (0)
News Analytics
Steel production in Ukraine in may increased compared to April02-06-2020, 15:03
The European car industry slid into a recession for the last six quarters -02-06-2020, 14:49
Port "South" has set an absolute record in handling most of them ore and coal02-06-2020, 10:49
On iron and steel in may sharply increased the production of cast iron02-06-2020, 10:04
YUZHMASH company congratulated SpaceX on the successful launch of the01-06-2020, 18:05
American steelmakers are faced with an unexpected problem associated with the14-05-2020, 09:09
Relying on the incentives, Chinese steelmakers increase production30-04-2020, 10:20
The rapid recovery of the steel market in China leads to a drop in iron ore22-04-2020, 13:11
Platts: steel Market of China will not be able to recover until the second half20-04-2020, 12:25
Express analysis of the steel market in the new economic environment: companies06-04-2020, 12:51