the Issues of economic development of Donbass and the stability of its industrial capacity have increasingly become topics of discussion at different levels of the political leadership of the country. 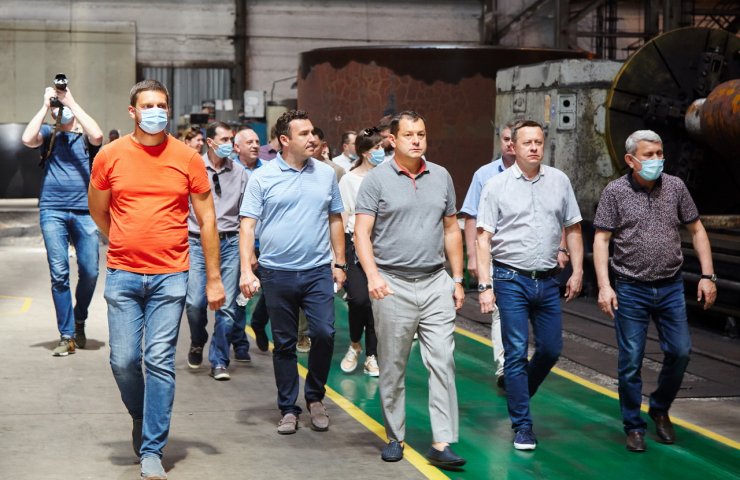 PJSC "Energomashspetsstal" once again visited by a delegation consisting of a group of deputies of the Verkhovna Rada of Ukraine, and also representatives of regional authorities, public organizations and media platforms.

the Visit took place at the initiative of the President of PJSC "EMSS", people's Deputy of Ukraine Maxim Efimov in the framework of acquaintance of representatives of the authorities and the public with the largest Ukrainian manufacturer of special cast and forged products for metallurgy, shipbuilding, various types of energy and General engineering.

General Director of PJSC "EMSS" Vitaly Gnezditsky familiarized the guests with the main directions of work of the enterprise, its business achievements and development prospects.

during the visit, major metallurgical plants, production Director of PJSC "EMSS" Andrey Valentiy clearly presented the main stages of manufacturing of important orders. In arc-furnace plant production of the visitors acquainted with the process of casting the ingot with the weight of 290т., and in forging – could see the forging of large billet roll at one of the largest in Europe presses us. 15000тс.

With a range of products sightseers acquainted Director of marketing and sales of PJSC "EMSS" Alexander Goncharenko.

"Thanks to the modernization and development of new technologies in recent years, EMSS has greatly expanded the geography of supply. Today EMSS works closely with leading companies in more than 50 countries around the world. Among the partners of the company such giants of industry as ArcellorMittal, Alstom, General Electric, BHEL, Siemens AG and other large companies", – said Alexander Goncharenko.

the delegation praised the facilities of Energomashspetsstal. Impressed with their modern equipment and the scale of production enterprises, and also the high organization of the production process.

Some of the guests had the first time become a visitor of such a massive production. "I confess that I first learned that we have a modern high-tech enterprises. I love it. We apply technology, unique not only in Ukraine. It is seen that the plant is actively growing, modernizing its facilities," said one of the representatives of the delegation.

Recommended:
Reuters learned the conditions for Russia's continued gas transit through Ukraine
Scrap collectors of Ukraine are surprised by the statements about the deficit of scrap metal at the factories
China will tighten regulation of virtual currencies - Xinhua
On this topic
"Energomashspetsstal" plans to double the sales in 2020
Energomashspetsstal has shipped to consumers in 2019 20,000 tonnes of steel products and equipment
EMSS has increased steel production in January by 50%
EMSS will supply the largest private steel plant of China 70 ton mill rolls
Vitaly Gnezditsky will work as CEO of Energomashspetsstal for another five years
Representatives of the Finnish company "Outokumpu" visited the Donbass
Add a comment
Сomments (0)
News Analytics
Demand for scrap metal in Ukraine exceeds supply by 5%19-06-2021, 11:45
Ukraine resumed sea purchases of gasoline due to restrictions on supplies from19-06-2021, 11:38
Installation of the first mine hoisting machine of Uralmashzavod began in Altai19-06-2021, 11:46
European designers have learned to inflate steel structures that could be a18-06-2021, 17:42
In Ukraine, police were accused of involvement in the theft of coal from trains18-06-2021, 17:51
Vaccinations fuel demand for platinum - World Platinum Investment Council08-06-2021, 12:55
Sharp price growth continues in the rolled metal market - Ukrpromvneshexpertiza08-06-2021, 11:04
Analysts note overheating of the global scrap metal market01-06-2021, 13:28
Hydrogen-fueled steelmaking could be competitive after 2050 - McKinsey19-05-2021, 14:22
Steel raw material prices are skyrocketing across the board18-05-2021, 12:34
Sign in with: