Reliable design solutions and system architecture of the Antares launch vehicle ensured the adaptability of the rocket design for rapid modernization. 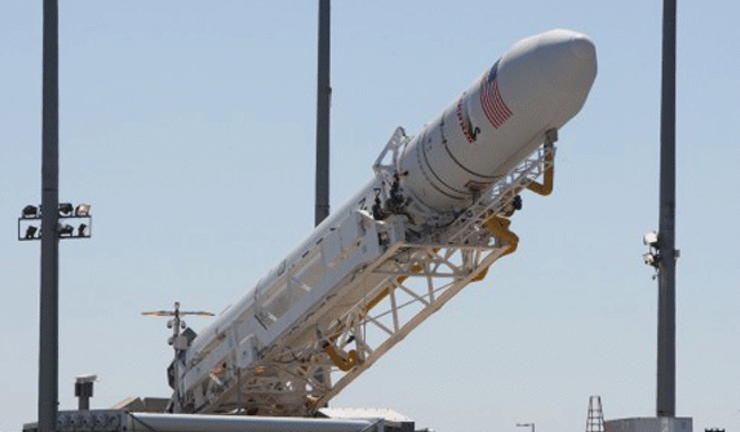 Yuzhnoye KB reported that the US-Ukrainian Antares program was awarded the prestigious The Laurels for Team Achievement award of the International Academy of Astronautics this year.

Thanks to the joint work of Ukrainian and American engineers, who united two different schools of rocketry, it was possible in a short time to create a reliable, efficient and affordable commercial launch vehicle "Antares" for payload delivery missions to the ISS within the framework of NASA COTS programs and CRS. This provided the international cosmonaut team with provisions and equipment necessary for the operation of the ISS and implementation of research programs at the station.

The main developer of the launch vehicle is the American corporation Northrop Grumman. The main structure of the first degree of the Antares launch vehicle was developed at the Yuzhnoye Design Bureau and manufactured at the YuMZ State Enterprise (Yuzhmash) in cooperation with the Ukrainian enterprises Khartron-ARKOS, Kievpribor, Khartron-YUKOM, CHEZARA, RAPID "and others.

The robust design solutions and system architecture of the Antares launch vehicle ensured the adaptability of the rocket design for rapid modernization aimed at improving the rocket's energy potential in accordance with the growing demand for the payload delivered to the ISS.

An effective control system for the preparation and implementation of launches of the Antares LV at the cosmodrome, which includes the practice and experience of two different schools of rocketry, as well as the participation of both American and Ukrainian experts, ensures the flawless execution of missions on time and within in accordance with the necessary parameters to support intensive operation on the ISS.

The rocket is characterized by high reliability and environmental safety, which allows launching in the vicinity of a nature reserve and populated areas in full compliance with all safety requirements, excluding the impact on the environment of Wallops Island, Virginia, USA.

The first launch of the Antares LV took place on April 21, 2013. As of today, 12 successful launches have been completed, about 30 tons of payload have been delivered to the ISS.

The Antares program is a vivid example of successful and effective international cooperation that serves the global goals of the peaceful development of outer space and further scientific and technological progress of mankind.

Финансовая аналитика, прогнозы цен на сталь, железную руду, уголь и другие сырьевые товары. More news and analytics on Metallurgprom telegram channel - subscribe to get up-to-date market information and price forecasts faster than others.
Сomments
Add a comment
Сomments (0)
On this topic
A launch vehicle with Ukrainian engines successfully launched a spacecraft with cargo for the ISS
Ukrainian-powered Antares launch vehicle successfully launched from Wallops cosmodrome
Yuzhmash told whether it is possible to launch reusable rockets from the Black Sea
Launch vehicle "Antares" is carrying a new toilet for the crew to the ISS
Americans special Charter took employees CB "southern" from Ukraine to USA
NASA postpones man-made moon landing due to legal battle with SpaceX
Recommended:
Ukrzaliznytsia announced the purchase of rails in France cheaper than in Metinvest before the war
British Steel seeks financial support from the government to continue work
UK is ready to give 300 million pounds to save British Steel
News Analytics
EU Green Deal should encourage investment in mild steel projects: Eurofer02-02-2023, 16:32
Belarusian steel plant to operate at full capacity from February02-02-2023, 16:56
British Steel considers cutting up to 1,200 jobs at Scunthorpe02-02-2023, 11:50
Electric vehicles will play a key role in US aluminum production growth - Norsk01-02-2023, 12:17
The former president of Motor Sich was accused of aiding terrorists01-02-2023, 11:39
European stainless steel producers ready to raise prices31-01-2023, 16:16
S&P: Russia will continue to dominate the steel export market in the Black05-01-2023, 11:22
Fitch Analysts Predict Big Drop in Global Steel Consumption This Year14-12-2022, 13:59
Analysts predict 5% annual growth in the iron casting market through 203006-12-2022, 12:44
Commodity prices will fall, metals quotes will rise slightly - Focus Economics28-11-2022, 13:28
Sign in with: