Yuzhny Machine-Building Plant named after A.M. Makarova was, until recently, an active participant in the large-scale space project Sea Launch, in which a Ukrainian launch vehicle was launched from a floating platform in the equator region, placing up to 6 tons of payload into orbit. 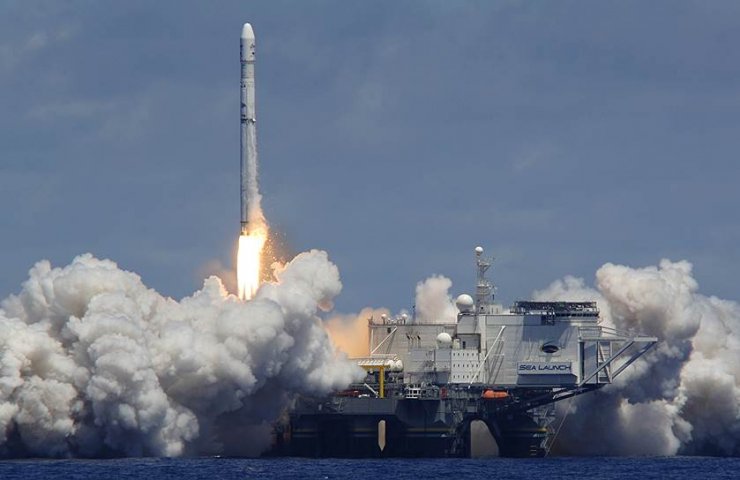 Chief Economist of Yuzhny State Enterprise machine-building plant named after A.M. Makarov "(Yuzhmash) Dmitry Nikon worked as a manager of the Russian-American-Ukrainian space project" Sea Launch ". He agreed to tell the details of the project and answer questions about the prospects for using the Black Sea for such a project.

Tell us more about the Sea Launch project. How did it all begin?

This is the largest project since Ukraine gained independence to the present time, in which Yuzhmash has participated.

Companies from the USA, Russia, Ukraine and Norway were involved in its implementation. During the work, specialists from Poland, the Philippines, Great Britain and other countries were involved. A tremendous experience was gained in terms of international cooperation.

To implement the project, it was necessary to resolve issues at the state level, seek support in the ministries and departments of various countries. This was one of the first experiences of such work. Representatives of Yuzhmash participated in the negotiations and provided explanations. For example, for the implementation of the Sea Launch project, Sea Launch took loans from various foreign commercial banks, these banks demanded “political risk guarantees” provided by the World Bank. Yuzhmash had to work with the World Bank and with the authorities of Ukraine: the Cabinet of Ministers, the Ministry of Foreign Affairs, SSAU.

Besides, for the project implementation it was necessary to solve technical problems. Almost no one in the world has ever launched a Zenith-like rocket from an offshore platform in the middle of the ocean.

To organize the supply of components and materials to Yuzhmash, we had to work with the government agencies of Russia, and in order to organize the delivery of rocket and space technology to America, we had to work with the US government agencies. That is, this was done for the first time, and before we had such work experience. These were the first main steps of Yuzhmash in this project.

Was this the first commercial order of Yuzhmash of this scale?

Yes. For the first time, we have a non-state customer. Practically for the first time, because, already in the years of independence, the first experience in the international space program was the Globalstar program, a contract with which for launching rockets from Baikonur, Yuzhmash was signed on May 3, 1995, and an agreement was signed literally 2-3 days later on the establishment of the Sea Launch company. That is, in May 1995 we had two such important events at once: the first contract and the signing of constituent documents on the deployment of work under the Sea Launch program. These two programs have been running concurrently for a while.

What experience has Yuzhmash gained?

Until 1992, in the field of rocket and space technology, Yuzhmash worked, as a rule, with government customers: first with the Ministry of Defense of the Soviet Union, then with the Russian Federation, with Glavkosmos, Roskosmos, and the National Space Agency. It was a great experience. But it was slightly different from the one we acquired later when working with the Sea Launch commercial order. We had a completely different structure of contracts, a completely different level of negotiations, a different settlement system, that is, everything was completely new for us.

How were the missiles transported to the United States?

From the point of view of transportation, we had to solve a large range of logistics problems. Previously, the rocket was delivered by rail to the Baikonur cosmodrome and other launch sites of the Soviet Union. For Sea Launch, we first used shipping by sea in the United States. The first two missiles were sent through St. Petersburg. Subsequent ones were delivered by land transport to the port of Nikolaev. It was necessary to resolve issues with the management of the port: how will the transshipment of railway connections to special transport vehicles be carried out, how these funds will be brought into the hold of the ship. We also solved the problem of transporting a rocket to the United States. In addition, it was necessary to provide for the operating conditions: the influence of the marine environment, a different air humidity, it was necessary to provide air drying systems. These works were carried out jointly with the designers. There was a problem and unloading from a ship in the United States, new equipment was needed, new operations.

Финансовая аналитика, прогнозы цен на сталь, железную руду, уголь и другие сырьевые товары. More news and analytics on Metallurgprom telegram channel - subscribe to get up-to-date market information and price forecasts faster than others.
Сomments
Add a comment
Сomments (0)
On this topic
Yuzhmash signed a contract for the supply of 10 more rocket engines for the Vega launch vehicle
Alexander Maksimovich Makarov - 114 years old
This day in history: the first launch of a unique Ukrainian rocket under the Sea Launch program
Yuzhmash received 210 million hryvnia of state support to pay off wage arrears
Yuzhmash asks Ukrainian authorities to support the head of the national space Agency
The Verkhovna Rada of Ukraine constitutional majority supported the plan of salvation Yuzhmash
Recommended:
Ferrexpo commented on the arrest of its director in Courchevel
Europe's passenger car market records its worst year since the turn of the century
Dneprovsky Metallurgical Plant continues to operate rolling shops using tolling raw materials
News Analytics
European steel price rise that began in January will be short-lived - MEPS26-01-2023, 14:44
Steel production in China rose in the first decade of January26-01-2023, 12:30
UK is ready to give 300 million pounds to save British Steel20-01-2023, 21:31
Carriage building plant in Kremenchug stopped production due to debts20-01-2023, 21:11
Europe's passenger car market records its worst year since the turn of the20-01-2023, 21:03
S&P: Russia will continue to dominate the steel export market in the Black05-01-2023, 11:22
Fitch Analysts Predict Big Drop in Global Steel Consumption This Year14-12-2022, 13:59
Analysts predict 5% annual growth in the iron casting market through 203006-12-2022, 12:44
Commodity prices will fall, metals quotes will rise slightly - Focus Economics28-11-2022, 13:28
Platinum market to face shortage next year - WPIC22-11-2022, 18:25
Sign in with: