As early as 9 years ago, INTERPIPE invested about a billion dollars in the construction of a new metallurgical plant in accordance with the strictest European environmental standards. 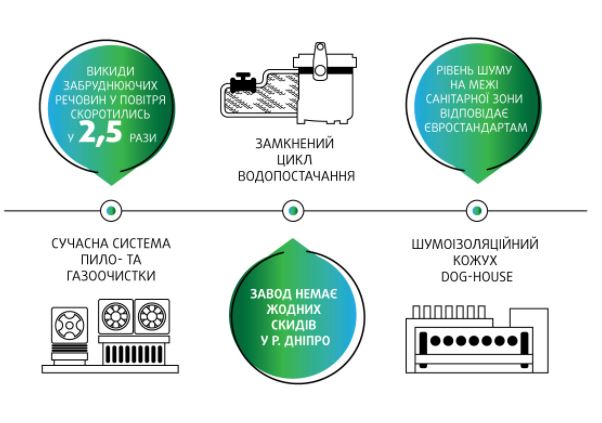 In January 2021, the innovative electric steelmaking complex "Interpipe Steel" turns 9 years old. This is the first metallurgical plant built in Ukraine from scratch during the years of Independence, and the largest green investment in domestic industry worth a billion dollars (together with related industries).

Construction of Interpipe Steel allowed to close the environmentally dirty open-hearth production and reduce CO 2 emissions by almost 10 times. Thanks to this, the plant already meets European environmental standards and the goals of the European Green Deal for 2050: its emissions do not exceed 250 kg of CO 2 per ton of steel.

Interpipe Steel is equipped with a modern dust and gas cleaning system according to European standards. Dust formed during steel smelting settles on filters and then granulates.

The plant also built a closed water supply cycle, thanks to which industrial discharges do not enter the Dnieper River. Moreover, due to the dog-house protective casing around the electric oven, the noise level complies with European standards.

- 9 years ago INTERPIPE invested about a billion dollars in the construction of a new metallurgical plant in accordance with the strictest European environmental standards. Then the issue of environmental modernization of industry was not as acute as it is now. But our example proves that decarbonization of industry is possible in Ukraine. Each investment project can and should have both economic and environmental components. You can not only dream of a European path, but also build Europe in Ukraine yourself.

Interpipe employs 11 thousand people. In 2019, the Company transferred UAH 3.25 billion to the budgets of all levels.

Recommended:
Ukrzaliznytsia in 2021 will invest over UAH 14 billion in production and infrastructure
The silver market is facing record supply and demand in 2021 - Silver Institute
China will cap annual coal production at 4.1 billion tons by the end of 2025
On this topic
Losses of Ukrainian industry from joining the European "Green Deal" will exceed half a billion euros
Ukraine expects difficult negotiations on trade in metal products as part of the renewal of the
Interpipe announced compliance with EU emission standards to be introduced in 2050
Stopped nuclear power plants and mines. What's going on in the energy sector of Ukraine?
Prime Minister of Ukraine suggested EU to start negotiations on the "European green deal"
The operator of the gas transport system of Ukraine has concluded agreements with all connecting
Add a comment
Сomments (0)
News Analytics
Coronavirus drove Belgian skiers to the slopes of the Charleroi waste heap07-03-2021, 13:52
US Steel focuses on the production of nanosteel for high-strength alloys07-03-2021, 13:46
Poland could lead the race in hydrogen steel technology07-03-2021, 11:29
US Senate Adopts $ 1.9 Trillion Stimulus Package06-03-2021, 23:54
Tibet invests about $ 30 billion in infrastructure projects in 5 years06-03-2021, 14:39
Spread between raw materials and high strength alloy steel in Europe increased01-03-2021, 20:21
Increase in prices is forecasted in the markets of steel raw materials -26-02-2021, 09:25
Troy ounce of gold will drop $ 500 in two years - Fitch25-02-2021, 18:29
Global iron ore production growth to outstrip cumulative production in India23-02-2021, 10:22
Fitch Ratings Warns of “Shocking Impact” on Fossil Fuel Exporters18-02-2021, 14:44
Sign in with: