The first series of these vessels of 4 units was built by the NIBULON shipyard in 2016. Today's event marks the completion of the construction of the second series of vessels, which indicates the success of the NBL-91 project. 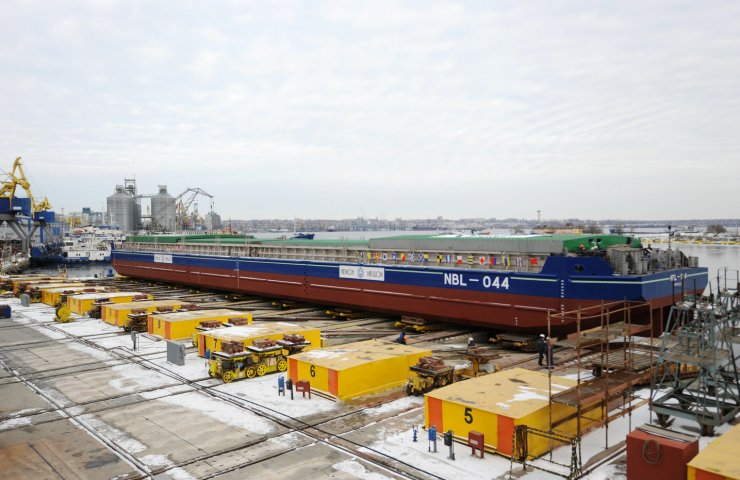 Elena Ilyushkina, a crane operator of the transport and logistics section, became the godmother of the new vessel. According to a long-standing tradition, to the applause of shipbuilders, she smashed symbolic bottles of champagne on the side, and the director of the plant, Vladimir Zhmur, gave the command to launch the ship. In 15 minutes, a powerful launching device moved the order to the water, after which the tugs transferred it to the outfitting pier, where the final work and testing of mechanisms began.

Let us remind you that the main characteristics of the vessel are: length - 90 m, width - 16 m, side height - 4.2 m, total cargo hold capacity - 5050 cubic meters. m and carrying capacity - 3000 tons. Its purpose is to carry out transportation of general and bulk cargo at any time of the year by all inland waterways of Ukraine.

Non-self-propelled vessels of the NBL-91 project are universal and demonstrate good performance on all Ukrainian rivers, but the first of them were built specifically for the revival of navigation on the Southern Bug River. And it is thanks to NIBULON's comprehensive approach to solving this problem that the main waterway of the south of the country started working. In 2019, the company transported more than 800 thousand tons of various cargoes in the Southern Bug and continues to work to increase the volume of cargo transported by rivers.

Now, six non-self-propelled vessels of the NBL-91 project under the NIBULON flag go by the country's inland waterways, and the total number of the company's fleet has reached 85 units.

Recommended:
Vostochny Ore Mining and Processing Plant reduced production of uranium concentrate by 45%
ArcelorMittal Temirtau drone army replenished with three more fighters
Specialists of SE "Antonov" ensured the urgent transfer of mining equipment from Australia to Brazil
On this topic
Prospects for ship repair in Ukraine
The ports of Nikolaev and Kherson are the most expensive in terms of the cost of servicing ships in
Smart Maritime Group launched 4 tanker for the Dutch VEKA Group
NIBULON shipbuilders are working on the sixth non-self-propelled vessel, the NBL-91 project
Yuzhmash told whether it is possible to launch reusable rockets from the Black Sea
Smart Maritime Group, has launched the third tanker for Dutch VEKA Shipbuilding
Add a comment
Сomments (0)
News Analytics
В Иране удовлетворены реакцией мирового сообщества на 60-процентное обогащение18-04-2021, 13:24
Gas prices in Ukraine have reached a record value over the past two years -16-04-2021, 17:24
Ukrmetallurgprom asks the Antimonopoly Committee to allow Metinvest to bid for16-04-2021, 17:23
A fatal accident occurred on the territory of the Dnieper Metallurgical Plant16-04-2021, 13:01
Cars built for Euro 2012 will be repaired at the Kryukov Carriage Works16-04-2021, 12:46
World Steel Association predicts a good year for metallurgists15-04-2021, 18:19
World Steel Association defines green steel and its variations12-04-2021, 13:14
China unlikely to cut steel capacity in 2021 due to high steel prices07-04-2021, 12:11
Scrap metal market at the beginning of April02-04-2021, 11:10
Rising Chinese Prices Fueled Rising Global Steel Prices - MEPS25-03-2021, 18:54
Sign in with: