The Ukrainian Union of Industrialists and Entrepreneurs is asking questions about the innovativeness of those ships and other equipment, which the government of Ukraine is willing to spend so generously on. 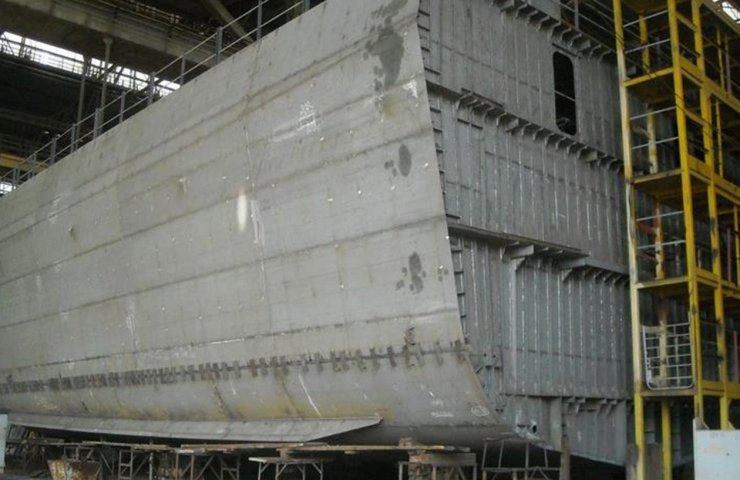 Ukrainian Union of Industrialists and Entrepreneurs (USPP) requires the government to make public the strategy of the Ukrainian corvette Vladimir the Great. USPP experts believe that the corvette can be completed, although due to the loss of time since 2011 (the start of the project) it will be more expensive than planned, and the technologies themselves continue to become obsolete.

This ship is the first in a series of 10-12 units. The cost of the Vladimir the Great corvette was estimated at 250 million euros. The cost of serial corvettes was expected at 200 million euros. According to USPP, the construction of the corvette would provide jobs for 10 thousand specialists in shipbuilding and related fields and would give a chance to preserve the development of Ukrainian shipbuilding.

“Our position is that the Ukrainian shipbuilding program for the needs of the Ukrainian Navy must be continued. The government should, together with parliamentarians and industrialists, clearly define its common position and publicize its strategy of action. How about the fate of "Vladimir the Great", in which millions of hryvnias have already been invested and which, due to the short-sightedness of a number of governments, rusts at the plant, and about shipbuilding in Ukraine as a whole, "said Anatoly Kinakh, President of the USPP.

The leader of the business community does not consider the policy of mass import, which is now widely pursued by the authorities, to be effective. Purchase of helicopters in France, boats in the USA and Great Britain, etc. - at the same time, Ukraine has capacities and factories that could supply Ukrainian Armed Forces with similar products with a high percentage of localization.

The USPP also raises the question of the innovativeness of those ships and other equipment, which the government of Ukraine is so generously willing to spend on. “In particular, there is information in the public space about the plans of the US Navy in the coming years to write off all Mark VI patrol boats. Among the main reasons are expensive maintenance and a certain obsolescence. Let us remind you that the Ukrainian government plans to buy them, ”the union said.

“2020 became a period of insane purchases - contracts and memoranda were signed for the supply of 5 corvettes, 47 missile and patrol boats (together), etc. The amount under these contracts is several billion dollars. At the same time, there is no own shipbuilding program, endless demonstration visits to the Black Sea shipbuilding plant, and the fate of the promising Ukrainian corvette has not yet been determined. At the same time, no one calculates how much it will cost Ukraine to put into operation and operate all these boats, etc. According to preliminary reports in the media, Ukraine will allocate 136 million dollars for the first Turkish corvette - without detailing the final cost, as well as the cost of all subsequent ones.

Therefore, the main question is: what is Ukraine's strategy in the naval sphere, or is the procurement of imported ships suitable for this strategy, or are these random decisions? Where is the solid analysis and economic calculations? We propose to focus on this now, and finally make a decision to complete the construction of the Ukrainian corvette and carry out calculations of the program for the continuation of the 58250 project already in modern realities, "the president of USPP summed up.

The USPP also calls for the adoption of the Strategy of Shipbuilding in Ukraine, and the creation of an efficient fleet requires a clear naval military doctrine and infrastructure development. This includes personnel, service, coordination and much more.

Recommended:
China intends to tighten control over strategic mineral resources
Turkey is developing a hybrid rocket to fly to the moon for the 100th anniversary of the republic
"Plant 410 Civil Aviation" will not pay for defective parts - court decision
On this topic
UN experts believe that the worst-case scenario for the Ukrainian economy can still be avoided
Yuzhmash told whether it is possible to launch reusable rockets from the Black Sea
How the reform of the electricity market in Ukraine can lead to a collapse and what to do about it
The energy Minister said on completion, "Nord stream 2" for a few months
Ukraine detensive the scrap metal market in the spring
The Nikolaev shipbuilders gave the signal SOS
Add a comment
Сomments (0)
News Analytics
Turboatom and Electrotyazhmash discussed prospects for cooperation under05-03-2021, 19:04
DMZ Yaroslavsky in February almost doubled the production of rolled products05-03-2021, 18:19
Sanjeev Gupta Metallurgical Alliance Stops Paying Greensill Loans05-03-2021, 18:18
China to build high standard free trade zone network to reach worldwide - Xinhua05-03-2021, 16:43
Ukraine and Australia have become one step closer in cooperation in the space05-03-2021, 14:25
Spread between raw materials and high strength alloy steel in Europe increased01-03-2021, 20:21
Increase in prices is forecasted in the markets of steel raw materials -26-02-2021, 09:25
Troy ounce of gold will drop $ 500 in two years - Fitch25-02-2021, 18:29
Global iron ore production growth to outstrip cumulative production in India23-02-2021, 10:22
Fitch Ratings Warns of “Shocking Impact” on Fossil Fuel Exporters18-02-2021, 14:44
Sign in with: