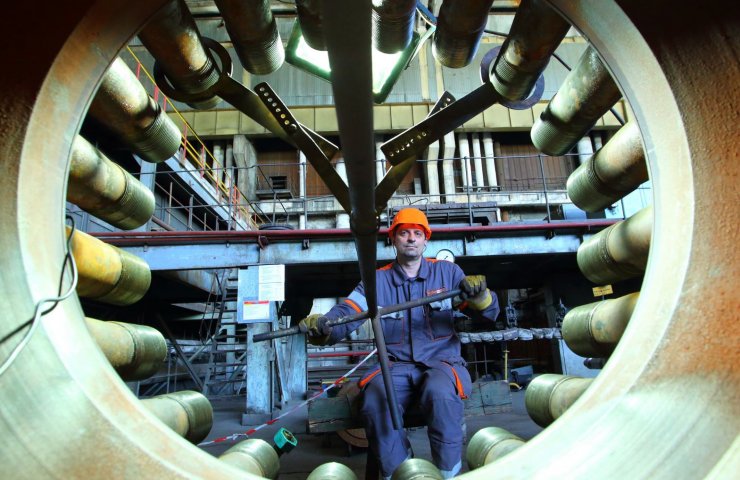 Donbasenergo informs that on April 9, 2021, commissioning works will begin at the Slavyanskaya TPP - the final stage of complex repairs, which was carried out at the 7th power unit of the station.

During the next week, at the preparatory stage, a comprehensive check of all elements of electrical equipment will be carried out, preparations are underway for test launches, operational mode and comprehensive testing.

As we have already reported, the reason for the emergency increase in the vibration of the turbine unit of power unit No. 7, which occurred on January 17 of this year at SlavTES, was the breakage of a fragment of the shroud of the locking package of rotor blades No. 11 of the control stage of the high-pressure cylinder wear of the rotor blades in the zone of their interface with the shroud, which was influenced by the presence of a stress concentrator in this zone.

During the period of repair work at the 7th power unit, the high-pressure cylinder of the turbine was opened, on the basis of the failure detection of the cylinder elements, the repair was carried out, the high-pressure rotor was replaced with a reserve one, the nozzle apparatus and diaphragms No. 2-8 were replaced.

In addition, the low-pressure cylinders (LPC) were opened, the units and parts of the flow path of the LPC No. 1, 2, 3 were repaired, including diaphragms, diaphragm guide vanes, working blades and shrouds of all stages of low-pressure rotors No. 1 , 2, 3 with sandblasting of their scapula. Replacement of one broken out of two defective (damaged side by side) rotor blades of the 43rd stage of the RND-2 was performed.

Even after the emergency shutdown of unit 7 of SlavTES, Donbasenergo continued to maintain heating in the city of power engineers Nikolayevka - boilers of the first stage operating on a mixture of coal and gas were put into operation, which caused additional losses for the company.

For information: as of 01.04.2021 60.86% of the shares of Donbasenergo PJSC belong to the Private Joint Stock Company ENERGOINVEST HOLDING, 25% + 1 share - to the state represented by the State Property Fund of Ukraine.

Donbassenergo PJSC unites two power plants: Slavyanskaya and Starobeshevskaya TPPs (the latter has been located on the territory not controlled by Ukraine since 2014). Since March 2017, the performance indicators of assets located in the temporarily occupied territory in the Donetsk region are not included in the consolidated statements of Donbasenergo due to the loss of control over them.

Recommended:
NKMZ shipped a unique steel-pouring stand to Uzbekistan
SSAB agrees with Volvo to supply and refine HYBRIT decarbonized steel
Mariupol Metallurgical Plant named after Ilyich increased production of rolled metal by 22.1%
On this topic
Chinese company DEIC will build a new power unit at the Slavyanskaya TPP
In Donbasenergo warned of a possible disconnection of water across Donetsk region
Donbasenergo alleges blackmail on the part of Donetskoblgaz and the possible collapse of the
"Donbassenergo" delivered to Ukraine from the Chinese city of Chengdu 12 t individual means of
PJSC "Donbasenergo" demands the immediate increase of electricity prices in Ukraine
In "Donbassenergo" declared "extremely critical situation" in the United energy system of Ukraine
Add a comment
Сomments (0)
News Analytics
Demand for scrap metal in Ukraine exceeds supply by 5%19-06-2021, 11:45
Ukraine resumed sea purchases of gasoline due to restrictions on supplies from19-06-2021, 11:38
Installation of the first mine hoisting machine of Uralmashzavod began in Altai19-06-2021, 11:46
European designers have learned to inflate steel structures that could be a18-06-2021, 17:42
In Ukraine, police were accused of involvement in the theft of coal from trains18-06-2021, 17:51
Vaccinations fuel demand for platinum - World Platinum Investment Council08-06-2021, 12:55
Sharp price growth continues in the rolled metal market - Ukrpromvneshexpertiza08-06-2021, 11:04
Analysts note overheating of the global scrap metal market01-06-2021, 13:28
Hydrogen-fueled steelmaking could be competitive after 2050 - McKinsey19-05-2021, 14:22
Steel raw material prices are skyrocketing across the board18-05-2021, 12:34
Sign in with: