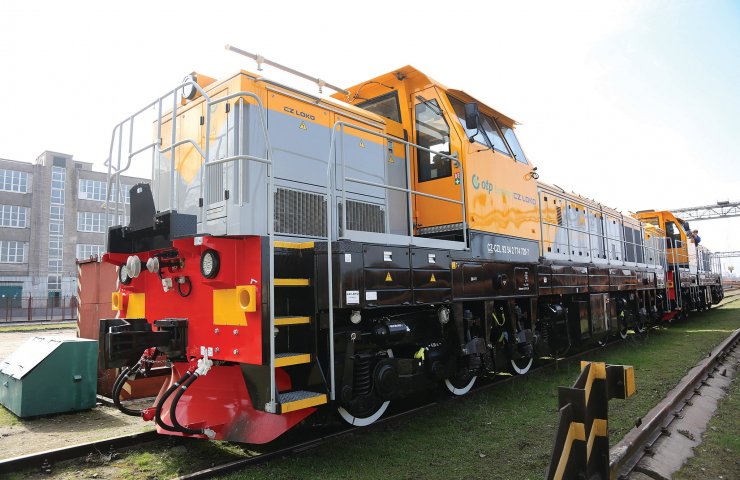 ArcelorMittal Kryvyi Rih was the first in Ukraine to look for new generation diesel locomotives manufactured by CZ Loko for operation, the press service of the largest metallurgical enterprise in Ukraine said.

According to ArcelorMittal Kryvyi Rih, they are very economical, convenient and economical. On average, they use 25-30% less fuel compared to outdated equipment and, in addition, are equipped with a digital control system, a system for monitoring the consumption of fuel and lubricants and cruise control.

Due to the fact that the locomotives are equipped with the appropriate national traffic management system, they are also used when performing complex maneuvers on the railway tracks.

"Computer software allows you to control the operation of the locomotive and carry out system diagnostics via the Internet from anywhere on Earth," the company said.

The undercarriage of the locomotive consists of two three-axle bogies with individual drive of all wheelsets. Traction motors are mounted on axles on sliding or rolling bearings. The drive unit is installed in the front hood of the locomotive. It includes a Caterpillar ICE and a Siemens traction generator.

The locomotive is equipped with a DAKO /MT3 Transmash pneumatic brake, a parking (hand) brake and an electrodynamic brake (EDT).

Recall that in the summer of 2019, a contract was signed for the supply of four locomotives of the EffiShunter 1600 series. It was originally planned that all diesel locomotives with a total value of 9 million euros will arrive in Krivoy Rog in 2020. The supply was interrupted by the outbreak of a novel coronavirus pandemic.

Recommended:
NKMZ began construction of a unique bridge ore grab reloader
A launch vehicle with a Yuzhmash engine successfully launched from a cosmodrome in the Atlantic
Rio Tinto plant in Canada starts making steel powder for 3D printing sprayed with water
On this topic
Ukrzaliznytsia plans to renovate more than 500 level crossings in 2021
An early warning system about man-made disasters has been launched at the Dnieper Metallurgical
ArcelorMittal Kryvyi Rih put into operation a new locomotive EffiShunter 1600
In 2020, Metinvest invested about UAH 8 billion in the development of Kryvyi Rih enterprises
ArcelorMittal Kryvyi Rih said about import substitution and the fight against Russian sanctions
"ArcelorMittal Kryvyi Rih" got the first in Ukraine modernized mainline locomotive
Add a comment
Сomments (0)
News Analytics
Chip shortage will cost the global auto industry $ 110 billion in revenue in14-05-2021, 12:15
Zaporizhzhya Dneprospetsstal expands international partnership14-05-2021, 11:17
The coal industry relies on new technologies to survive in the decarbonization14-05-2021, 11:38
In January-April, Ukrainian metallurgists increased steel production by 7.2%14-05-2021, 10:03
Metinvest does not want to sell pig iron of Dnipro Metallurgical Plant to third14-05-2021, 09:03
The current state of the market is ideal for the sale of rolled steel - IREPAS04-05-2021, 18:41
Global hydrogen demand to grow 7-fold by 2070 - PwC21-04-2021, 12:31
World Steel Association predicts a good year for metallurgists15-04-2021, 18:19
World Steel Association defines green steel and its variations12-04-2021, 13:14
China unlikely to cut steel capacity in 2021 due to high steel prices07-04-2021, 12:11
Sign in with: