The deputies of the Kamensk City Council reminded the owners of Metinvest of the need to finance the "environmental debts" of the former Dnieper Metallurgical Plant. 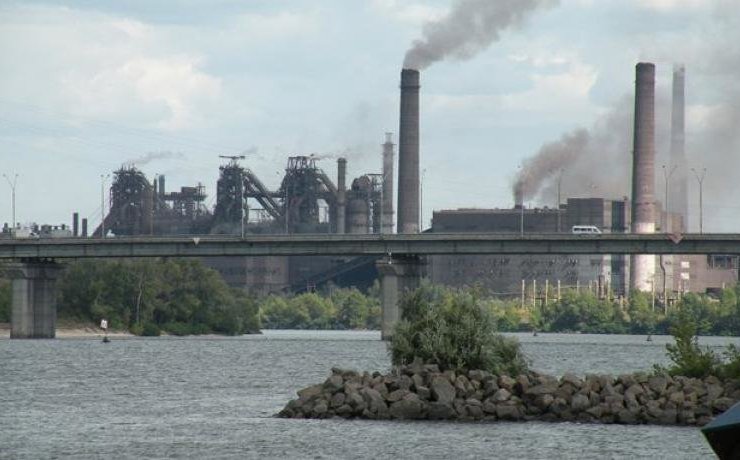 Deputies of the Kamensk City Council and the head of the city Andrey Belousov appealed to the co-owners of the Dutch mining and metallurgical holding Metinvest, Rinat Akhmetov and Vadim Novinsky, regarding the financing of environmental measures planned by PJSC Dnipro Metallurgical Plant (DMK). The corresponding initiative of the chairman of the city environmental commission, Alexander Lukashov, was unanimously supported on September 24, during the plenary session of the city council session.

In July, the DMK property complex was sold through an open auction. Its new owner was ZAO Dniprovsky Coke and Chemical Plant, which is part of the Metinvest holding. But the legal entity JSC "Dneprovsky Metallurgical Plant" did not become an object of the auction.

“The Dnieper Metallurgical Plant at one time developed and pledged to finance and implement a certain list of measures aimed at reducing emissions and improving the ecological state of Kamenskoye. In our appeal, we ask the owners of the Metinvest holding to finance these obligations. After all, the property of DMK was transferred to the coke oven, which is part of the holding, ”stressed Alexander Lukashov, head of the Kamensk city environmental commission.

The mayor's office recalled that the leadership of the former Dnieper Metallurgical Plant has planned the implementation of environmental measures for a total of about 1.48 billion hryvnia. According to the environmental program of Kamensky, they should be funded by 2025. However, the DMK was declared bankrupt.

“The City Council and the head of Kamensky, Andrey Belousov, demonstrate a balanced constructive position. It is unchanged: the economy must work, but in compliance with environmental standards and legislation, ”added Alexander Lukashov.

Финансовая аналитика, прогнозы цен на сталь, железную руду, уголь и другие сырьевые товары. More news and analytics on Metallurgprom telegram channel - subscribe to get up-to-date market information and price forecasts faster than others.
Сomments
Add a comment
Сomments (0)
On this topic
Immediately after the sale of the Dnieper Steel Works, an environmental audit will come to the plant
Metinvest is ready to pay more than 9 billion hryvnia for the Dnieper steel plant
AMCU requested the opinion of the companies on the obligations of Metinvest in case of obtaining
Mariupol asks the government of Ukraine to update railway cars on the routes
The general director of the shipbuilding company Vadim Novinsky resigned
Rinat Akhmetov told why they decided to pay UAH 9 billion for the Dnieper steel plant
Recommended:
EU new car market continues to recover in double digits
Metinvest enterprises in Ukraine resumed work after massive shelling of infrastructure
Analysts predict 5% annual growth in the iron casting market through 2030
News Analytics
Analysts predict 5% annual growth in the iron casting market through 203006-12-2022, 12:44
Oman to build a new steel plant worth $3 billion in 3 years06-12-2022, 12:14
Tesla's Shanghai gigafactory set a new record for electric vehicle shipments in05-12-2022, 15:24
Sanjeev Gupta may lose control of his steel plants in Belgium05-12-2022, 13:55
Steel demand and weather in Australia will affect coking coal prices05-12-2022, 13:16
Analysts predict 5% annual growth in the iron casting market through 203006-12-2022, 12:44
Commodity prices will fall, metals quotes will rise slightly - Focus Economics28-11-2022, 13:28
Platinum market to face shortage next year - WPIC22-11-2022, 18:25
Global steel demand falls and will fall by 2.3% in 2022: WorldSteel19-10-2022, 23:12
Iron ore prices fall to 11-month low15-10-2022, 10:36
Sign in with: