The second stage of the Dniester wind farm with a capacity of 60 MW will be completed, as planned, by the end of the first half of 2022. 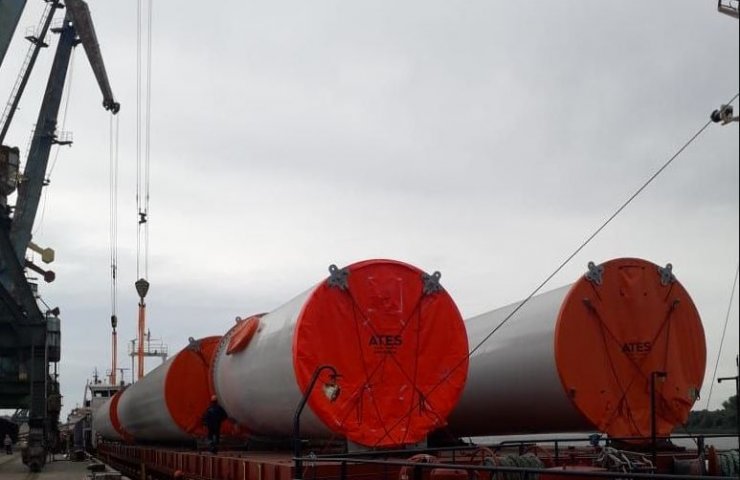 The motor ship "DREMORA 2" arrived at the Reni seaport with the first shipment of large-sized equipment of the turbines and engineering services division (ATES) of SIMEC Atlantis Energy for the second stage of the Dniester wind farm in the amount of 1021 tons. This was reported by the Administration of the seaports of Ukraine.

The equipment is unloaded by two Condor gantry cranes with a lifting capacity of 40 tons each to the port's warehouses with subsequent reloading onto special vehicles.

Two more shipments with power equipment totaling up to 3,600 tons are expected to arrive at the port soon, the Administration noted.

Recall that the first stage of the Dniester wind farm was commissioned on March 2, 2021. Its capacity is 40 MW. At the moment, construction has begun on the second stage with a capacity of 60 MW, which will be launched in the first half of 2022.

Dniester wind farm with a total capacity of 100 MW to produce 360 ​​million kWh per year, and this is enough to provide electricity to 180,000 households during the year. The use of this green energy will avoid the emission of the equivalent of 280 thousand tons of CO2 into the atmosphere.

A subsidiary of VR Capital Elementum Energy is building the Dniester wind farm together with the American developer Ukraine Power Resources.

Earlier it was reported that the American company VR Capital stopped four projects for the construction of wind farms in Ukraine with a total capacity of 260 MW due to financial risks due to the possible introduction of an excise tax on the production of "green" electricity at the level of 3.2%. The new excise tax is provided for by the resource bill No. 5600, the second reading of which was postponed this Thursday for another 10 days.

Финансовая аналитика, прогнозы цен на сталь, железную руду, уголь и другие сырьевые товары. More news and analytics on Metallurgprom telegram channel - subscribe to get up-to-date market information and price forecasts faster than others.
Сomments
Add a comment
Сomments (0)
On this topic
Yuzhmash told whether it is possible to launch reusable rockets from the Black Sea
Vestas and DTEK RES signed an agreement for the supply of wind turbines for the construction of the
Ukraine has received new shunting capacities: the 4th hydroelectric unit of the Dnestrovskaya PSPP
Transshipment of ore in the port Yuzhny increased for the six months 80%
Sea container transportations in Ukraine has grown by 20 percent exceeding million TEU
Mariupol plants for the first time in history started to ship slabs to Odessa by sea
Recommended:
The United States imposed a ban on the import and sale of equipment from Huawei, ZTE and a number of other Chinese companies
The European Council added the violation of restrictive measures (sanctions) to the list of EU crimes
JSPL steel mill manager stoned to death
News Analytics
Analysts predict 5% annual growth in the iron casting market through 203006-12-2022, 12:44
Oman to build a new steel plant worth $3 billion in 3 years06-12-2022, 12:14
Tesla's Shanghai gigafactory set a new record for electric vehicle shipments in05-12-2022, 15:24
Sanjeev Gupta may lose control of his steel plants in Belgium05-12-2022, 13:55
Steel demand and weather in Australia will affect coking coal prices05-12-2022, 13:16
Analysts predict 5% annual growth in the iron casting market through 203006-12-2022, 12:44
Commodity prices will fall, metals quotes will rise slightly - Focus Economics28-11-2022, 13:28
Platinum market to face shortage next year - WPIC22-11-2022, 18:25
Global steel demand falls and will fall by 2.3% in 2022: WorldSteel19-10-2022, 23:12
Iron ore prices fall to 11-month low15-10-2022, 10:36
Sign in with: