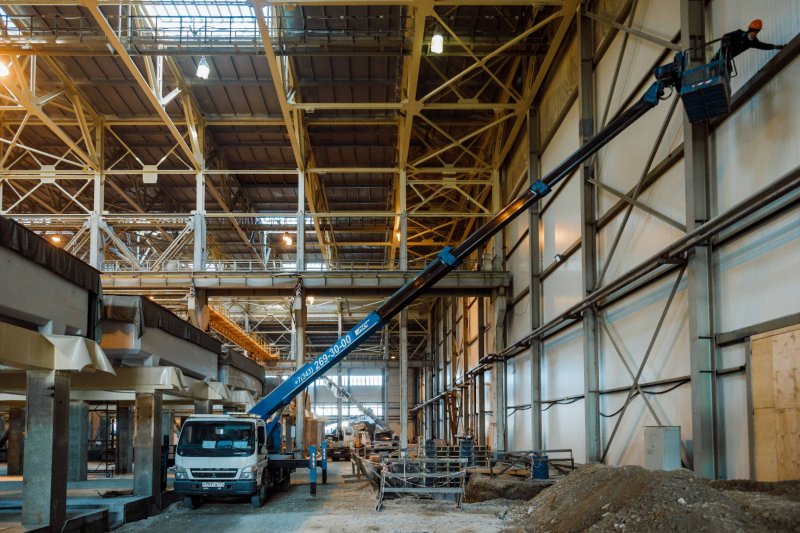 Uralelectromed JSC (an enterprise of the UMMC metallurgical complex) continues construction of the third stage of the copper electrolysis workshop, which will operate using baseless technology.

According to the words Vadim Mironov, Director for Construction and Reconstruction of Uralelectromed JSC, a large amount of work has been completed in a year and a half. The building frame was erected with columns, crane beams and floor trusses. The heating circuit is completely closed, glazing has been made.

At present, heating is supplied to the building, the general contractor Uralmetallurgmontazh 2 is assembling foundations for technological machines for preparing anodes and washing anode scrap. At the facility, a fire retardant is applied to metal structures, ventilation ducts in the transport span, concrete surfaces are painted.

In addition, builders are laying a recirculating water network that will cool the equipment.

- All work on corrosion protection is carried out after 20.00, when the day shift ends. This is a laborious process. First, the surfaces are cleaned, then blown off, a layer of primer is applied, then a fire-retardant layer and after that a finishing paint-and-lacquer coating - this is what the new fire safety rules require, - said Vladimir Koryakin, head of the capital construction management project of JSC Uralelectromed.

Recall that in February 2012, Uralelectromed JSC commissioned the first stage of a modern workshop with a design capacity of 160 thousand tons of cathode copper per year. In May 2018, the second stage with a similar capacity was launched. The new production facility will allow the enterprise to produce a total of over 400,000 tonnes of copper cathodes per year.

Финансовая аналитика, прогнозы цен на сталь, железную руду, уголь и другие сырьевые товары. More news and analytics on Metallurgprom telegram channel - subscribe to get up-to-date market information and price forecasts faster than others.
Сomments
Добавить комментарий
Комментарии (0)
On this topic
JSC "Uralelectromed" is completing the construction of the foundation for the third stage
JSC "Uralelectromed" has begun installation of a ceiling of copper electrolysis plant
The foundation of the third stage of the copper electrolysis workshop of Uralelectromed JSC is 75%
JSC "Uralelectromed" is preparing a "pillow" for the third stage of the copper
JSC "Uralelectromed" prepared 45% of the foundations for the third stage of the copper
Outotec to supply process machines to the third stage of the copper electrolysis plant
News Analytics
The United States refused to impose duties on Russian metals and increase02-07-2022, 09:05
Daimler Truck began testing Actros tractor on liquid hydrogen02-07-2022, 08:54
Volvo invests $1.25 billion to build electric vehicle plant in Slovakia01-07-2022, 18:17
Swedish court authorizes construction of steel mill for the first time in 5001-07-2022, 11:09
AvtoVAZ plans to produce at least 400,000 vehicles in 202301-07-2022, 11:29
High iron ore shortage could halt metallurgy's green transition28-06-2022, 14:02
Price volatility hits global steel market27-06-2022, 19:28
Recovery in China could be key to rising global steel prices - MEPS24-06-2022, 14:00
Conflict in Ukraine spurs Europe's drive for clean energy03-06-2022, 12:14
US steel market sentiment becomes more price neutral05-05-2022, 10:15
Sign in with: