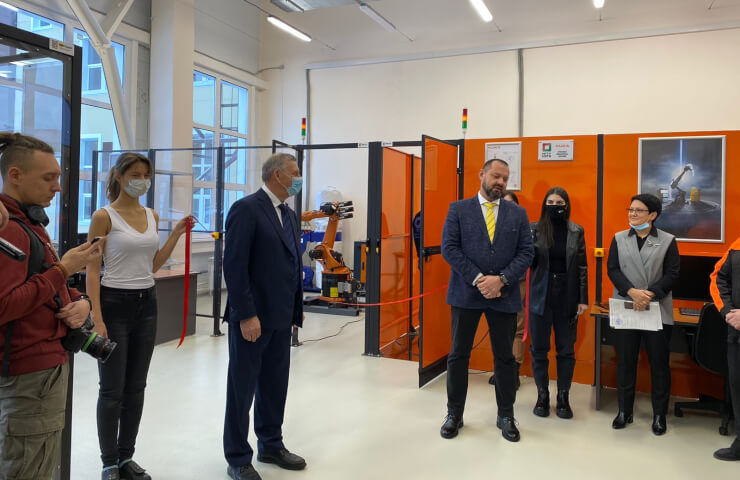 On the 16th of November, on the basis of Novosibirsk State Technical University (NSTU), the grand opening of the laboratory of industrial robotics took place. Within the framework of the event, ESAB is one of the world leaders in the production of equipment and consumables for welding and cutting metals, KUKA is a manufacturer of robotics, industrial and system equipment, Inspair is an integrator of industrial robots and NSTU signed a number of cooperation agreements. From this point on, a robot welder, a milling machine and a sorter are at the disposal of future engineers.
On that day, a round table was held, during which the rector of NSTU and representatives of ESAB and KUKA companies discussed the prospects for the development of industrial robotics and trends in the field of automation of modern production.
Also, as part of the opening of the laboratory, a competition of welders in the field of semi-automatic welding was held. Welders competed with robots in the quality and speed of work. The event was attended by heads of leading Siberian enterprises and students of NSTU.
"Robotics is an important element of modern production, and we, as one of the leaders of the welding industry, consider the opening of the laboratory a serious step for the Russian industry on a whole. Now both young specialists and enterprises will have access to the most modern equipment, learn all its capabilities, which means they will be able to effectively integrate it into work. Such alliances of higher educational institutions and manufacturers of current  equipment are an opportunity to improve the level of training of young specialists, as well as an incentive for the development of the Russian industry as a whole," - Dmitry Kiselyov, Sales Director in Russia, ESAB, said during the opening ceremony of the laboratory.
"The Technocenter and the Robotics Laboratory will become an important part of the Priority 2030 program, which includes NSTU NETI. Laboratories and comfortable conditions for work, scientific developments and training of professional personnel will be created on the basis of the Technocenter. The opening of the center is an important step not only for the university, but also for the entire Novosibirsk region. Now there are advanced models on the robotics market, but most enterprises are still afraid to introduce them into production. In the Laboratory of Industrial Robotics, opened in the Technocenter of NSTU NETI, enterprises will be able to test their production process and decide on their realization," said Anatoly Bataev, Rector of NSTU NETI.

ABOUT ESAB:
ESAB is one of the world leaders in the production of equipment and consumables for welding and cutting metals.
Today ESAB manufactures equipment for manual welding and cutting, automated welding and mechanical cutting systems, as well as welding materials and personal protective equipment.
ESAB sales and technical support offices are located in 145 countries. The company has more than 35 manufacturing plants, and its personnel includes more than 10,000 employees. The company's main technology center is located in Gothenburg, Sweden, where welding materials are being developed.
In Russia and the CIS, ESAB is the largest full-cycle welding company, which has held a leading position in the market for many years. The company has a wide network of distributors represented in all federal districts. In 8 regions of the Russian Federation, in Belarus, Kazakhstan and Ukraine, OOO "ESAB" has opened 10 subsidiaries, as well as 2 factories for the production of welding materials - in Saint Petersburg and Tyumen.
In 2016, the ESAB Technology Center was opened in Russia, in the Krasnogorsk, which located in Moscow region. Tasks of center include the development of technologies, training and demonstration of equipment.

Independent journalist. Specially for Metallurgprom More news and analytics on Metallurgprom telegram channel - subscribe to get up-to-date market information and price forecasts faster than others.
Сomments
Добавить комментарий
Комментарии (0)
On this topic
Made in Russia: Local ESAB products at Weldex
The regional stage of the Abilimpics welding championship was held in Tatarstan with the support of
Everything brilliant is simple! New welding sources from ESAB
STRONGER TOGETHER: ESAB joined the association "SPETSAVTOPROM"
You can now get a "ticket to the future" at the ESAB technology center!
Complexity. Innovation. Technologies: ESAB has presented the premieres of the 2021 season
News Analytics
British scientists have found a way to cut CO2 emissions from steel production28-01-2023, 23:49
European steel price rise that began in January will be short-lived - MEPS26-01-2023, 14:44
Steel production in China rose in the first decade of January26-01-2023, 12:30
UK is ready to give 300 million pounds to save British Steel20-01-2023, 21:31
Carriage building plant in Kremenchug stopped production due to debts20-01-2023, 21:11
S&P: Russia will continue to dominate the steel export market in the Black05-01-2023, 11:22
Fitch Analysts Predict Big Drop in Global Steel Consumption This Year14-12-2022, 13:59
Analysts predict 5% annual growth in the iron casting market through 203006-12-2022, 12:44
Commodity prices will fall, metals quotes will rise slightly - Focus Economics28-11-2022, 13:28
Platinum market to face shortage next year - WPIC22-11-2022, 18:25
Sign in with: