Metalloinvest has signed a socio-economic development of Novotroitsk 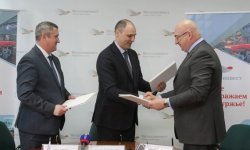 Company metalloinvest, the government of the Orenburg region and the administration of the city of Novotroitsk (Orenburg oblast) adopted the programme of activities of the socio-economic partnerships (EPAS) in 2020.

the Document during a visit to JSC Ural Steel (part of metalloinvest) was signed by the Governor of the Orenburg region Denis Pasler, General Director UK "metalloinvest" Andrey Varichev, and head of Novotroitsk Dmitry Bufetov.

Investments of the parties in the framework of the EPAS 2020 will amount to 934 million rubles, of which 503 million roubles, the contribution of the Orenburg region, 381 million rubles – the company (represented by Ural Steel), 50 million rubles – Novotroitsk.

"All of the commitments in the framework of EPAS assumed metalloinvest, the government of area and administration of Novotroitsk in the past year, fully implemented, - said Denis Pasler. – This year among the priorities of the partnership - the creation of a comfortable urban environment, traditional support of health, education and sports. Metalloinvest is a reliable partner of the region. The company not only supports but also initiates important for the city and region social and infrastructure projects."

"Our priority is sustainable development of the regions in which we operate our businesses, employees live with their families, - said Andrey Varichev. - Pooling of resources of all parties can effectively solve the task of improving the quality of life in Novotroitsk. Ural Steel continues to grow steadily and retooling. In 2019, the payments of the plant to the consolidated budget of the Orenburg region amounted to about 1 billion rubles. Another 373 million roubles we have directed on realization of important city events and programs in the framework of the EPAs".

"Thanks to the active social position of metalloinvest and the support of the government of the region, we have the opportunity to dramatically improve our city, - said Dmitry Bufetov. - Implement relevant to the residents of the event, school health programs, improvement of urban areas, maintenance of sports facilities and schools. Hundreds of millions of rubles were invested in infrastructure, which creates a new image of the city. With the assistance of the Company's Novotroitsk first in the region received the status of the territory of advancing socio-economic development and is working to attract investors and develop new businesses to bolster the stability of the economy".

the Government of the Orenburg region in the framework of the BOT will allocate funds for capital repairs of houses in the street Soviet, maintenance and repair of roads, repair of MOAU "Lyceum №1", the provision of housing to orphans and young families and other projects.

the Company will focus on development of social infrastructure of Novotroitsk. The largest investment will be the construction of a multifunctional sports complex will continue the repair works in DYUSSH-1 and in the stadium "Yunost", as well as improvements to water treatment systems swimming pool "Wave".

this year will be open Gymnasium No. 1, repair of which is financed by metalloinvest.

will Continue the overhaul of the emergency care Hospital. In 2020 the Company will be allocated 65 million rubles.

In the field of education the Company will continue to provide support for basic educational institutions of the Ural Steel Novotroitsk branch of nust "MISIS" and Novotroitsk Polytechnic College.

we will Continue implementing the corporate programs of development of territories "let's Do it together!" "Heed!", "Our city initiatives", "Our Champions", etc.

a Partner of the company "metalloinvest" to implement projects in the field of culture and sport is the Foundation of Alisher Usmanov "the Art, science and sport", which implements projects of cultural platform of the ART WINDOW and initiatives to promote sport and healthy lifestyle - Seasport.of the Russian Federation.

In the framework of the platform "ART WINDOW" in Orenburg will be presented an exhibition of Russian painting from the collection of the Pushkin Museum. A. S. Pushkin, and in Novotroitsk festival of street theatres, art and creativity, which is expected to more than 10 thousand spectators.

the money of participants, the BOT also will be directed on major repairs of a building of the library family reading on the Ural street, purchase equipment and support special boarding school, and other projects.

On this topic
Metalloinvest became a General partner of the VIII St. Petersburg international cultural forum
Gaysky GOK put into pilot operation the shaft of the mine "Operation"
A new city park and a multifunctional sports complex were opened in Gaya
Acting Governor of the Orenburg Region Denis Pasler visited Metalloinvest's Novotroitsk plant
The eternal flame from the factory furnace, Victory Waltz, Procession of military equipment and a
Metalloinvest invests over RUB 1 billion in sustainable development of the Kursk Region
Partner news
Сomments
Добавить комментарий
Комментарии (0)
News Analytics
Workers of Novokramatorsk Machine-Building Plant vaccinated with American27-07-2021, 15:01
Kharkov plant "Turboatom" can be renamed to "Ukrainian power machines"27-07-2021, 15:33
At least one person died and four went missing in an explosion at a chemical27-07-2021, 15:25
A powerful explosion thundered at the Bayer chemical plant in the German city27-07-2021, 12:56
Steel raw materials prices decline in all regional markets27-07-2021, 11:57
Steel raw materials prices decline in all regional markets27-07-2021, 11:57
On the regional markets of metallurgical products, prices are balancing in a22-07-2021, 16:22
Demand for armaments will ensure a stable growth of armored steel sales by 4%20-07-2021, 10:10
Protectionist Measures Support European Steel Prices Despite Summer Lull19-07-2021, 11:02
Positive price growth is observed in the markets for metallurgical products16-07-2021, 14:12