Construction of a swimming pool started in Mednogorsk 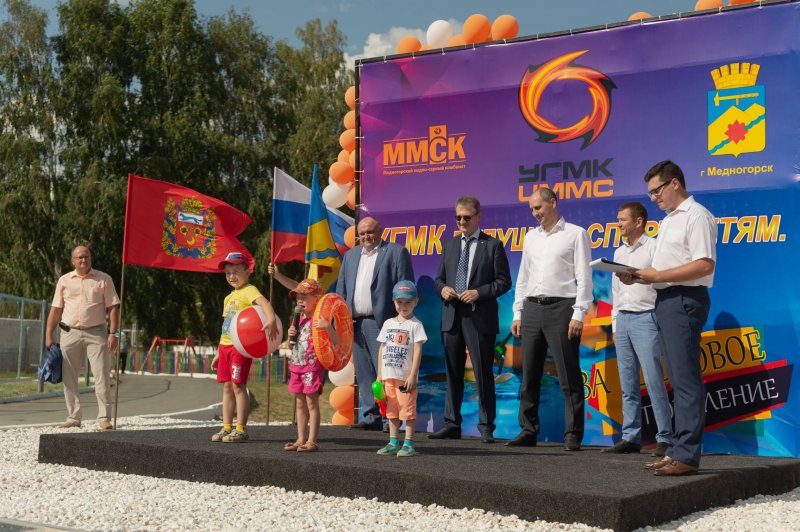 Mednogorsk Copper and Sulfur Combine (an enterprise of the UMMC metallurgical complex) was visited by the Governor of the Orenburg Region Denis Pasler and General Director of UMMC Andrey Kozitsyn.

The official part of the meeting began with a visit to the converting and smelting section of the copper smelter, where during the last two months, repair and restoration work took place after the accident that occurred on April 24 this year. From June 25, all copper smelting furnaces and units are operating at full capacity.

the meeting with the Governor of the region and the management of the UMMC was attended by about 30 representatives of the labor collective of the metallurgical enterprise. The workers of the plant were informed about the completion of the investigation of the accident at the hazardous production facility. The results of the commission's work with the participation of Rostekhnadzor, the State Labor Inspectorate and other structures were transferred to the control bodies. Denis Pasler and Andrey Kozitsyn answered the questions of metallurgists about the conditions and organization of labor, production safety, the prospects for the operation of MMSK, etc.

On the same day, the head of the region Denis Pasler and the general director of UMMC Andrey Kozitsyn laid a symbolic "time capsule" at the construction site of a new sports facility in the city of Mednogorsk. The pool measuring 11x25 meters can simultaneously be used by 32 people, the same number in the preparatory room, in addition, there are spectator stands for 30 seats.

- This will be the first large pool in the city, where people from Mednogorsk will be able to engage in water sports sports. It will have everything you need - the pool itself with 4 lanes, where more than 30 people can train at the same time, a preparatory room, a chemical laboratory. Completion of construction is planned for 2022. A new sports facility will appear in Mednogorsk thanks to the region's socio-economic partnership with the Mednogorsk copper and sulfur plant. We are grateful to the management of the plant and UMMC for this contribution to the development of sports and, in general, for their participation in the life of the city. The sports and recreation complex that appeared here last year is also a merit of the enterprise, - Denis Pasler emphasized.

The total cost of building an indoor swimming pool will amount to about 221 million rubles. Of these, 95 million rubles have been allocated to the budget of the Mednogorsk Copper and Sulfur Combine this year.

- Today we are attending the ceremony of starting the construction of a large sports facility, which, I am sure, will be in demand by Mednogorsk residents as well as the Sokol health and fitness complex, which in Mednogorsk is rightfully considered the center of the city's sports life. Pupils of the local sports school, retirees, workers of the MMSK and other organizations study here. This is part of our long-term policy of creating a comfortable environment for living in the territories where the enterprises of the Ural Mining and Metallurgical Company are located, - said UMMC General Director Andrey Kozitsyn.

A team of 15 people will ensure the functioning of the swimming pool. The pool itself will be built on the territory of the Trud stadium, which is considered one of the best sports arenas in the Eastern Orenburg region. Among the main structures of the stadium is the Sokol sports and recreation center, opened in 2020.

Финансовая аналитика, прогнозы цен на сталь, железную руду, уголь и другие сырьевые товары. More news and analytics on Metallurgprom telegram channel - subscribe to get up-to-date market information and price forecasts faster than others.
Сomments
Добавить комментарий
Комментарии (0)
On this topic
The Governor of the Orenburg Region met with representatives of the team and the management of the
Acting Governor of the Orenburg Region Denis Pasler visited Metalloinvest's Novotroitsk plant
Mandrivnik Spodin Igor
The Governor of the Orenburg Region with the Director of the Gaysky GOK opened an updated city
The Governor of the Orenburg Region and the Director of the Gaysky GOK launched a new production
The Chelyabinsk enterprises of Mechel were visited by a government delegation
News Analytics
ArcelorMittal launches flagship carbon capture and recycling project in Belgium08-12-2022, 14:59
The South Korean government "ordered" the striking truckers to return08-12-2022, 11:04
India expands RoDTEP export incentive scheme to steel and iron08-12-2022, 10:28
Volkswagen Anhui's first pre-production NEV rolled off the assembly line08-12-2022, 10:17
Chinese steel exports up 28.2% - customs data07-12-2022, 23:43
Analysts predict 5% annual growth in the iron casting market through 203006-12-2022, 12:44
Commodity prices will fall, metals quotes will rise slightly - Focus Economics28-11-2022, 13:28
Platinum market to face shortage next year - WPIC22-11-2022, 18:25
Global steel demand falls and will fall by 2.3% in 2022: WorldSteel19-10-2022, 23:12
Iron ore prices fall to 11-month low15-10-2022, 10:36
Sign in with: