Metalloinvest in 2020, investing more than 1.7 billion rubles to sustainable development in Belgorod region 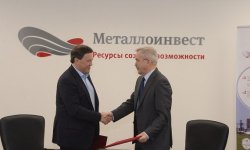 the Total amount of the Program in 2020 will exceed that of 8.55 billion roubles, including more than 1.7 billion rubles – funds of the company. The contribution of the Belgorod region will amount to 6.85 billion rubles, it includes the regional and Federal budgets.

"metalloinvest – a city-forming company of Stary Oskol and Gubkin Metropolitan area, where a total population of one third of the population of the Belgorod region. Therefore, from the operation of enterprises, the company listed a tax is the welfare of the territory, including in social sphere, - said the Governor of the Belgorod region Yevgeny Savchenko. - The contribution of metalloinvest huge, we are grateful. Hope you will remain a good conjuncture in the markets of products produced by enterprises of metalloinvest, and all the goals we have set are met. This year, in addition to taxes, the company will invest 1.7 billion rubles in the development of social infrastructure of Stary Oskol and Gubkin urban districts. Everything is done to ensure that these areas are developed."

"Together with the Government of the Belgorod region, the company continues to invest in the development of social infrastructure of Stary Oskol and Gubkin, - said Andrey Ugarov. – The pooling of resources and competences of the region and allows the company to effectively solve the problem of improving the quality of life in cities, where live the employees of our enterprises. Lebedinsky GOK and OEMK are among the largest taxpayers in the region: in 2019 they are listed in the consolidated budget of the Belgorod region more than 20 billion rubles in taxes and fees. Investments in the framework of EPAS was more than 1.6 billion rubles."

In 2020 in Stary Oskol metalloinvest will continue the partnership and support of specialized universities of STI nust "Misa" and MGRI-rsgpu, will direct funds for development of sports infrastructure – support will be provided to the Palace of sports. Alexander Nevsky, is planned reconstruction of the stadium of the school №28.

under the direction of the formation of a comfortable urban environment will continue the reconstruction and improvement of city Central promenade of the river Oskol in the quarter of the "Old Mill", a reconstruction of a memorial in the district chieftain of the forest, the repair of children's preschool and educational institutions. Part of the funds planned for the purchase of municipal equipment, reconstruction and repair of roads.

In Gubkin will continue to support the Gubkin mining College and a Polytechnic branch of nust "MISIS".

the company will direct the funds to repair MAUK "Gubkinskiy theatre for children and young people," the reconstruction of the Gymnasium №6, support of cultural institutions, the renovation of the city Park, installation of sports and Playground equipment. In addition, the company plans to allocate funds for the creation of architectural spatial development strategy of the city.

On the territory of Stary Oskol and Gubkin urban districts metalloinvest will continue the implementation of corporate social programs: "let's Do it together!" "A healthy child", "Women's health", "Our shift", "Our Champions" help seriously ill children in conjunction with BF Rusfond "to Make the world brighter!", OPTS "Train!", "Heed!".

the Company will also continue sponsorship support to volleyball club "Belogorye". In addition, metalloinvest in the framework of the BOT will allocate funds for the construction of a multifunctional sports arena in Belgorod.