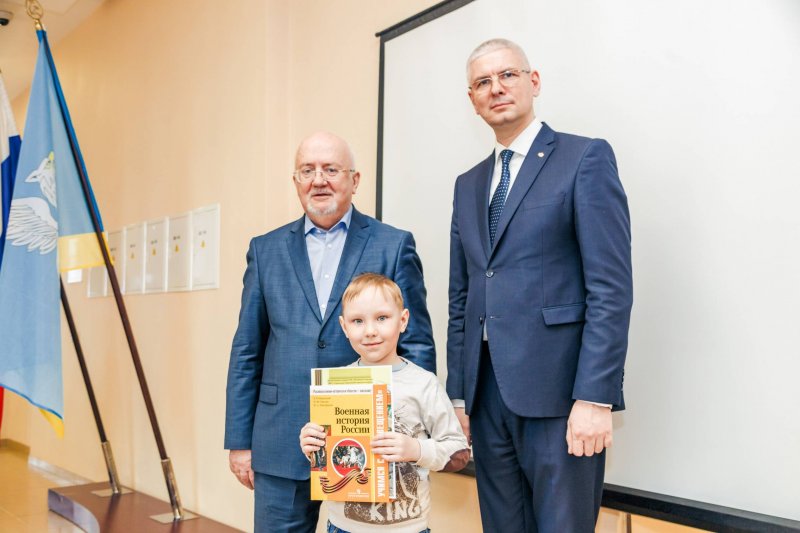 The UMMC Museum of Military Equipment hosted a solemn awarding ceremony for the winners of the city creative competition "Our Grandfathers Fought", dedicated to the 74th anniversary of the Victory in the Great Patriotic War. 220 children from 6 to 15 years old from Verkhnyaya Pyshma, Sredneuralsk and other cities took part in it.

Schoolchildren and kindergarten students sent their drawings and crafts on the theme of the Victory in the Great Patriotic War to the museum. An exhibition of children's art was created from the works of the participants of the competition on the first floor of the museum.

In the paintings, young artists depicted soldiers and veterans, Soviet tanks storming enemy fortifications, the banner of Victory fluttering over the Reichstag. Children also made handicrafts from scrap materials: reduced reconstructions of battles, knitted tanks and even copper memorials.

“The guys independently made models of monuments, military equipment, some buildings,” says the director of the museum, Alexander Yemelyanov. - It is very valuable when children themselves create, fantasize, use the skills acquired in circles and in labor lessons. It is good that they keep the memory of their ancestors who fought on the fronts of the Great Patriotic War and won victory for us 74 years ago.

Today, the winners and participants of the creative competition were awarded with certificates and prizes. A similar competition is held annually by the Museum of Military Equipment of the UMMC on the eve of May 9. The most important area of ​​the exhibition complex, where more than 500 units of unique wartime equipment are collected, is educational activities and additional education. On the basis of the museum, there are now circles of poster modeling, the history of weapons, national military history and local history. More than 60 schoolchildren are engaged in them. Children and adolescents learn the basics of technical design and, using examples of real tanks and other exhibits of the exhibition complex, study the history of the country.

The UMMC Museum of Military Equipment is rightfully considered one of the most major Russian military-technical exhibition grounds, along with museums in Moscow, St. Petersburg, Togliatti and Saratov. It contains the world's largest collection of planes, tanks, cannons, ships, trains and cars from the Great Patriotic War.

The exposition of the museum's open area occupies almost 5 hectares, and the area of ​​the exhibition center, including the interactive classroom, is about 7000 m². The museum has a lot of truly unique exhibits. Among them are a 152-mm howitzer of the 1909 model, a 203-mm howitzer B-4, light tanks MS-1 and T-26 in a two-turret version, etc.

On this topic
Dozens of schoolchildren took part in the military-patriotic training camp at the Byngi airfield
The Spartakiad of schoolchildren "Healthy Generation" started in the Sverdlovsk Region
The eternal flame from the factory furnace, Victory Waltz, Procession of military equipment and a
May 9 in Verkhnyaya Pyshma: Eternal flame from the factory oven, Victory Waltz, Procession of
Izhstal honors war and labor veterans
Frontline veterans and home front workers are honored at BMK
Partner news
Сomments
Добавить комментарий
Комментарии (0)
News Analytics
Azerbaijan's SOCAR plans to invest in the extraction of battery metals in26-07-2021, 22:00
The first domestic industrial energy storage system was developed and launched26-07-2021, 22:11
The profitability of purchases of scrap metal in Ukraine has decreased, but is26-07-2021, 17:27
Metinvest is ready to pay more than 9 billion hryvnia for the Dnieper steel26-07-2021, 13:01
Cherkassk Azot by Dmitry Firtash completed the modernization of the ammonia26-07-2021, 13:45
On the regional markets of metallurgical products, prices are balancing in a22-07-2021, 16:22
Demand for armaments will ensure a stable growth of armored steel sales by 4%20-07-2021, 10:10
Protectionist Measures Support European Steel Prices Despite Summer Lull19-07-2021, 11:02
Positive price growth is observed in the markets for metallurgical products16-07-2021, 14:12
European steel market is in confusion: price growth has slowed down, but no one21-06-2021, 17:40