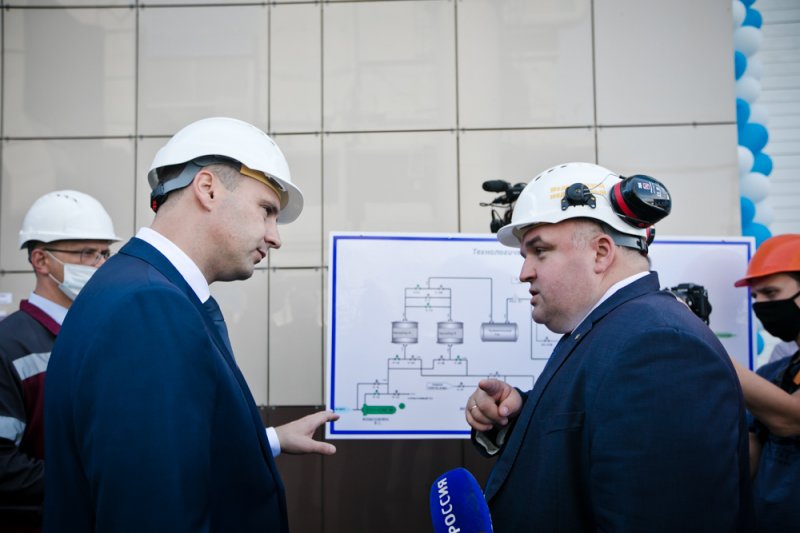 The construction of the second stage of a new oxygen station, worth more than 870 million rubles, has been completed at the Mednogorsk copper and sulfur plant. Governor of the Orenburg region Denis Pasler, the management of the enterprise and the municipality, took part in the solemn ceremony of receiving the new industrial facility.

“It is very pleasant to observe the positive changes that are taking place at Mednogorsk MSK. Undoubtedly, this is the merit of UMMC. Responsible shareholders and management of the company, as well as the professional team of metallurgists of MMSK, ensure reliable and stable development of the enterprise and the municipality. I want to say thank you very much for that, "- said Denis Pasler.

Recall that the construction of the first stage of the oxygen station began five years ago, in 2016 it was put into operation. During its construction, the prospects for further expansion were envisaged, and today two stages of an oxygen station with a total capacity of 10.7 thousand cubic meters per hour are located under one roof in one production building.

“The completion of the construction of the oxygen station is another step in the modernization of the copper and sulfur plant. We receive a powerful impetus for the further development of its chemical and metallurgical complex and tools for improving the technical and economic indicators of the city-forming enterprise, ”said Andrey Ibragimov, General Director of MMSK.

The copper-sulfur plant was among the first industrial enterprises in Russia , who chose the Japanese company SUMITOMA SEIKA as suppliers and manufacturers of equipment. Russian enterprises, which accounted for 40% of the local equipment of the oxygen station, did not remain aloof from the construction of an important facility at the MMSK. Recall that for the production of oxygen, the latest technology of vacuum pressure swing adsorption is used, which significantly differs from the cryogenic unit operating at the plant. The main advantages of the new station are compactness, greater flexibility in performance, modular design, which provides easy access to equipment for maintenance and repair. Another indisputable advantage is its energy efficiency, energy savings are up to 30% compared to the old station.

The construction of the second stage of the oxygen station will increase the capacity of the copper-sulfur plant for process oxygen, which is a serious step towards the further development of the chemical and metallurgical complex of the plant. The use of oxygen-enriched blast increases the productivity of metallurgical units and improves their technical and economic performance. So with the commissioning of the first stage of the oxygen station for vacuum pressure swing adsorption, the fuel consumption in shaft furnaces decreased from 3.4% to 0.3% of the charge.

In addition, the new oxygen station gave a powerful impetus to the development of production and the development of new technologies at the Pobeda smelting unit, where work is currently underway to introduce the technology of bottom blowing of the melt, which will improve the process of processing copper-containing raw materials and increase the productivity of the enterprise.

As noted by the management of the enterprise, investments in modernization of the industrial sector requires considerable capital expenditures, the return of which can only be guaranteed by the stable operation of the plant. Over the past three years, production of the main product, blister copper, has increased by 28%. In 2019, this figure was a record 51,600 tons. The successful production activity of MMSK allows the company to finance important social projects in the city of Mednogorsk. Among them is the Sokol sports and recreation complex, worth 150 million rubles. The construction of the sports and entertainment center was completed in August 2020.

The new sports complex is organically integrated into the existing structure of the Trud stadium - the main sports arena of the city. Spacious, with a well-thought-out layout and a sufficient number of rooms, it looks light and fresh from the outside thanks to the sunny colors of the facade and the almost transparent entrance group made of glass and concrete.

It houses a universal hall for game types with

On this topic
A new Ice Arena opened in the Orenburg city of Gai
In Mednogorsk MSK started the installation of the main technological equipment of the 2nd phase of
Metalloinvest has signed a socio-economic development of Novotroitsk
A new city park and a multifunctional sports complex were opened in Gaya
Modern filter presses have been introduced at MMSK
The eternal flame from the factory furnace, Victory Waltz, Procession of military equipment and a
Добавить комментарий
Комментарии (0)
News Analytics
China's Non-Ferrous Metals Sector Records High First Quarter Profits08-05-2021, 15:43
Copper price rises to a record high08-05-2021, 10:17
Dneprotyazhmash manufactures technological equipment for DMK07-05-2021, 10:07
The National Bank of Ukraine will sell 46 tons of scrap metal from obsolete07-05-2021, 10:10
Dnieper Metallurgical Plant DCH Steel in April reduced steel production by 2.8%07-05-2021, 09:18
The current state of the market is ideal for the sale of rolled steel - IREPAS04-05-2021, 18:41
Global hydrogen demand to grow 7-fold by 2070 - PwC21-04-2021, 12:31
World Steel Association predicts a good year for metallurgists15-04-2021, 18:19
World Steel Association defines green steel and its variations12-04-2021, 13:14
China unlikely to cut steel capacity in 2021 due to high steel prices07-04-2021, 12:11
Sign in with: