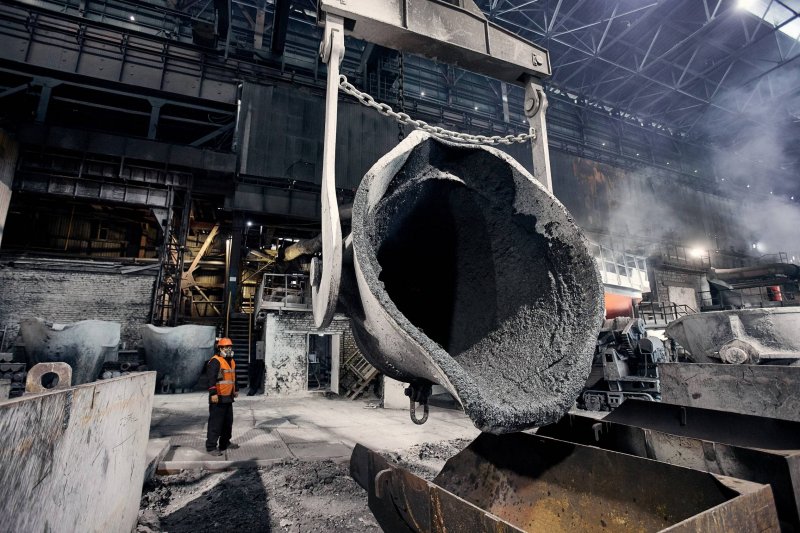 In the metallurgical shop of the Polymetals Production branch of Uralelectromed JSC (an enterprise of the UMMC metallurgical complex), a place was organized for cleaning ladles from deposits. This will significantly reduce the labor costs of crane operators and slingers.

- Before organizing the site for cutting the crusts, we had to use a crane to move the bucket two hundred meters to the place of knocking out and then back, - says the acting director. head of the converter department of the metallurgical shop of the branch Leonid Vovk. - Due to the fact that now everything is in one place, in the immediate vicinity of the metallurgical units, the time for these operations has been reduced by 15-20 minutes. Considering that during a shift, depending on the technological process, we have to knock out four to seven times, the innovation significantly saves labor and energy resources, and allows you to more quickly prepare ladles for receiving melts.

The first stage optimization was the commissioning of an installation for cleaning ladles from scabs (November 2019). Due to this, it was possible to completely eliminate the mechanical stress experienced by the crane during a dynamic impact during the process of knocking out the bucket. The optimal location of the unit in the center of the workshop building made it possible to access any of the three operating cranes.

The second stage took place in July this year, when a crusting area was set up next to the ladle cleaning unit. Now, after knocking out, the crusts are immediately loaded into the tray and returned to production.

The site is a reinforced concrete base with a U-shaped protective fence. The project was prepared by the design department of the branch, the metal structures were made by the forces of the centralized equipment repair shop, and the concrete work was carried out by the refractory workers of the metallurgical shop.

On this topic
The TMK Board of Directors recommends accepting the voluntary offer of the TMK subsidiary in
At Chelyabinsk zinc plant applied industrial artillery
Polymetals Production has launched an installation for cleaning ladles from deposits
The installation of a new installation for cleaning buckets is being completed at the "Polymetals
The MMSK fleet has been replenished with a new domestic-made railway crane
An apron was installed at the Polymetals Production Plant for cleaning gases
Partner news
Сomments
Добавить комментарий
Комментарии (0)
News Analytics
Workers of Novokramatorsk Machine-Building Plant vaccinated with American27-07-2021, 15:01
Kharkov plant "Turboatom" can be renamed to "Ukrainian power machines"27-07-2021, 15:33
At least one person died and four went missing in an explosion at a chemical27-07-2021, 15:25
A powerful explosion thundered at the Bayer chemical plant in the German city27-07-2021, 12:56
Steel raw materials prices decline in all regional markets27-07-2021, 11:57
Steel raw materials prices decline in all regional markets27-07-2021, 11:57
On the regional markets of metallurgical products, prices are balancing in a22-07-2021, 16:22
Demand for armaments will ensure a stable growth of armored steel sales by 4%20-07-2021, 10:10
Protectionist Measures Support European Steel Prices Despite Summer Lull19-07-2021, 11:02
Positive price growth is observed in the markets for metallurgical products16-07-2021, 14:12