A 122mm howitzer of the 1938 model was delivered to Kirovgrad 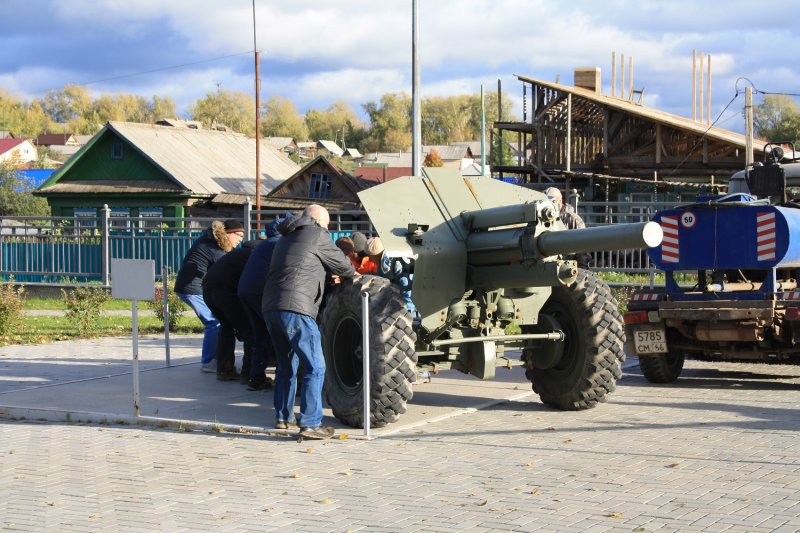 Kirovgrad (Sverdlovsk region) A 122 mm M-30 howitzer of the 1938 model was delivered to Kirovgrad. It became the ninth exhibit of military equipment in the city "Victory Park". The gun, 6 meters long and weighing 2.5 tons, took up one of the two free pedestals. This event took place with the support of the Ministry of Defense of the Russian Federation, the Administration of the Governor of the Sverdlovsk Region and the Ural Mining and Metallurgical Company. - When the Victory Park was created, with the direct participation of UMMC, six units of military equipment were installed, - said the Head of the Kirovgrad city district Alexander Oskin. - One veteran BMP appeared in Kirovgrad thanks to a public organization of internationalist soldiers. Two seats remained free. We have not stopped trying to fill them. This year, only two units of equipment were allocated by the Ministry of Defense for the Sverdlovsk Region. Kirovgrad, thanks to the Victory Park organized in the city, was among the lucky ones.

For transporting a howitzer from a military unit, located in the village of Gagarsky, Beloyarsky district, the branch "Production of polymetals " JSC "Uralelectromed " allocated an onboard KAMAZ and a crane for unloading. Park Pobedy is a favorite place of recreation for citizens. Since its opening in 2017, this is the first addition among the exhibits. On fine days there are a lot of adults with children. Interest in the exhibits in the park, according to the Head of the KGO, Alexander Oskin, is an important element of educating the younger generation, familiarizing with the history of Kirovgrad and Russia as a whole. Work with the Ministry of Defense and the Governor's Administration continues. Next year, as the Head of the KGO hopes, the remaining free space will be filled. Help The M-30 howitzer is a famous and legendary weapon of the workers 'and peasants', Soviet and Russian armies. Any documentary film about the Great Patriotic War almost necessarily includes footage of the firing of an M-30 battery. Even today, despite its age, this weapon remains in service in many armies of the world. According to some artillery experts, the M-30 is one of the best designs of Soviet barreled artillery of the mid-20th century. Equipping the artillery of the workers 'and peasants' Red Army with M-30 howitzers played a big role in the defeat of Nazi Germany in the Great Patriotic War.