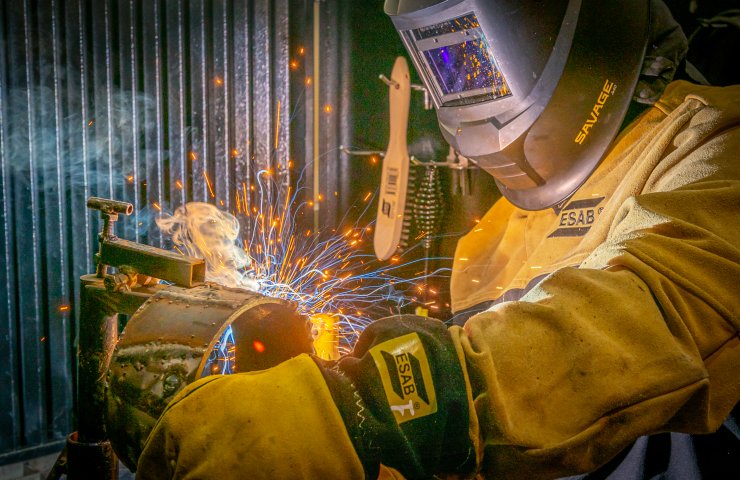 Moscow, November 16, 2020-ESAB, one of the leaders in the production of equipment and consumables for welding and cutting, supported the holding of the Abilimpix regional championship in the Republic of Tatarstan.
On November 13, Nizhnekamsk, Republic of Tatarstan, hosted the Abilimpics regional championship in Welding technologies. Competitions in manual welding of MMA, TIG and MIG/MAG were held on the territory of the N. V. Lemaev College of petrochemistry and oil refining. The competition was held in three categories - "schoolchildren," students " and "specialists". It was attended by 13 people.
Among the tasks were welding of control butt and t-joints and manufacturing of the structure. ESAB organized five welding posts at the College specifically for the competition.
Among schoolchildren, Adeline Gilfanova won, she scored 68 points. Students with a score of 96.5 points beat Peterkin Nikita Sergeevich, and the first place in the category "Specialists" was won by Fakhriev Ayrat Gayazovich, who scored 97 points out of 100.
The winners of the stage will compete with the finalists of other regions in the VI national championship "Abilympics", which will be held from November 23 to 29, 2020 in full-time and distance format.
"Abilympics" is an international non-profit movement, which aims to improve the prestige of working professions and the development of professional education. This is the only system of professional skill competitions for people with disabilities and people with disabilities. The movement was born in Japan in 1972 and came to Russia in 2014. Now 47 countries of the world take part in it.
This year, more than two thousand people from 82 regions of the Russian Federation take part in the competition. Schoolchildren, students and specialists compete on the platforms of educational organizations in 77 competencies.
Cooperation between the Abilympics movement and ESAB began in preparation for the national stage of the competition in 2019. At the moment, the company supports the national team at all stages of the championship in the competencies "Industrial robotics" and "Welding technologies".
"Such movements as "Abilympics" make an invaluable contribution to the professional development of young people. Its participants are trained by leading specialists of the region throughout the year, and the results they show at competitions confirm its effectiveness. We are happy to share our knowledge and experience in welding technologies and support the Championships, as they allow disabled people and people with disabilities to better adapt to working realities, gain skills on modern equipment and be more competitive in subsequent employment," said Dmitry Kuraksa, managing Director of ESAB in Russia and the CIS.

About ESAB:
ESAB Is one of the world's leading manufacturers of equipment and consumables for welding and cutting metals.
Today, ESAB produces equipment for manual welding and cutting, automated welding and mechanical cutting systems, as well as welding materials and personal protective equipment.
ESAB has sales and technical support offices in 145 countries. The company has more than 35 manufacturing plants and employs more than 10,000 employees. The company's main technology center is located in Gothenburg, Sweden, where welding materials are developed.
In Russia and the CIS, ESAB is the largest full-cycle welding company that has been leading the market for many years. The company has a wide network of distributors represented in all Federal districts. In 8 regions of the Russian Federation, Belarus, Kazakhstan and Ukraine, OOO "ESAB" opened 10 branches, as well as 2 factories for the production of welding materials - in St. Petersburg and Tyumen.
In 2016, the ESAB technology center was opened in Krasnogorsk, Moscow region, Russia. Its tasks include the improvement of technologies, training and demonstration of equipment.

Independent journalist. Specially for Metallurgprom More news and analytics on Metallurgprom telegram channel - subscribe to get up-to-date market information and price forecasts faster than others.
Сomments
Добавить комментарий
Комментарии (0)
On this topic
Everything brilliant is simple! New welding sources from ESAB
ESAB and RG-Techno: At the beginning of glorious deeds!
Made in Russia: Local ESAB products at Weldex
Severstal was the winner of the competition PEOPLE INVESTOR
At the top of efficiency: ESAB technology has increased the productivity of welding production by
Severstal wins the PEOPLE INVESTOR competition in the COVID-19 pandemic response category
News Analytics
Eurofer expects EU steel demand to fall 4.6% in 2022 and 1.6% in 202305-02-2023, 13:31
EU Green Deal should encourage investment in mild steel projects: Eurofer02-02-2023, 16:32
Belarusian steel plant to operate at full capacity from February02-02-2023, 16:56
British Steel considers cutting up to 1,200 jobs at Scunthorpe02-02-2023, 11:50
Electric vehicles will play a key role in US aluminum production growth - Norsk01-02-2023, 12:17
European stainless steel producers ready to raise prices31-01-2023, 16:16
S&P: Russia will continue to dominate the steel export market in the Black05-01-2023, 11:22
Fitch Analysts Predict Big Drop in Global Steel Consumption This Year14-12-2022, 13:59
Analysts predict 5% annual growth in the iron casting market through 203006-12-2022, 12:44
Commodity prices will fall, metals quotes will rise slightly - Focus Economics28-11-2022, 13:28
Sign in with: