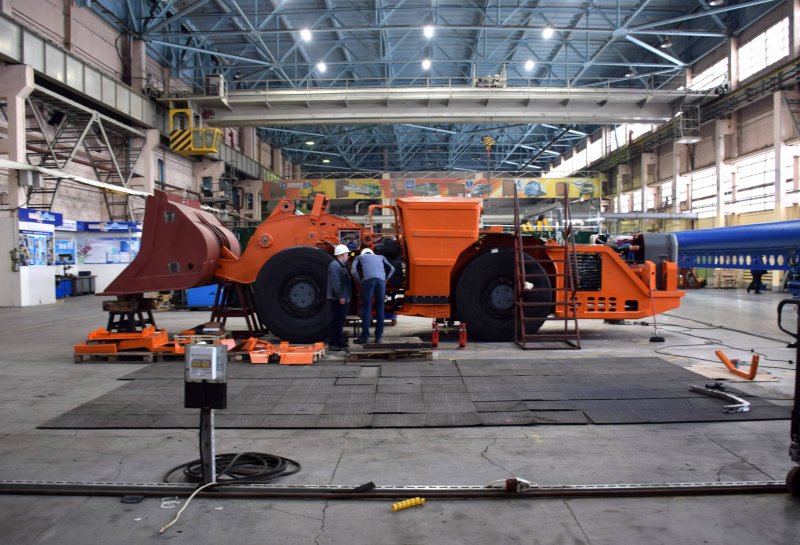 At the Shadrinsk Automobile Aggregate Plant, a new single-girder crane with a lifting capacity of 10 tons has been replenished with a new single-girder bridge crane at our site, necessary for the movement of components and other cargoes in the process of LHD manufacturing, - said Roman Vakhrameev, deputy head of the shop for modernization of diesel locomotives of SHAAZ JSC. - Until that moment, we had only a 5-ton crane, and with the advent of a new device, we will be able to move loads in several operations simultaneously, which will significantly speed up and simplify the process of manufacturing machines.

A metal structure 28 meters long and weighing 17 tons manufactured at the Middle Volga Crane Plant. Specialists of the same enterprise arrived from Ulyanovsk to Shadrinsk in order to carry out the installation of the crane on site: to put end beams, hang a cargo trolley, lift and install the crane on the crane tracks and make its electrical connection.

As explained by Roman Vakhrameev In addition to the overhead crane, the PDM production site has also been equipped with new pipe bending and turning machines for metalworking.

The assembly of the second PDM14-UGMK loading and hauling machine with a lifting capacity of 14 tons is now being completed at the site. In the near future, specialists will start setting up the hydraulic system, electronics and preparing for sea trials, after which the car will be handed over to the customer. In parallel, a 10-ton LHD is in operation. Also, by the end of the year, production of parts for a 17 tonne LHD will begin, the next model in the mine loader line. The release of the first PDM17-UMMC is scheduled for 2021.

Since the start of the investment project for the production of LHDs in 2018, SHAAZ JSC has produced ten loaders. After reaching the design capacity, the enterprise plans to produce up to 50 units of underground equipment per year, including LHDs of various carrying capacities and mine dump trucks.

On this topic
SHAAZ has produced the first LHD with a carrying capacity of 14 tons
The TMK Board of Directors recommends accepting the voluntary offer of the TMK subsidiary in
A base for routine maintenance of modernized diesel locomotives has been created at SHAAZ
SHAAZ modernize shunting locomotives for "Norilsk Nickel"
Gaysky GOK will train future operators of LHD using a simulator
ShAAZ was visited by specialists of the American company Generac Power Systems
Добавить комментарий
Комментарии (0)
News Analytics
Iran is satisfied with the reaction of the world community to 60% enrichment of18-04-2021, 13:24
Gas prices in Ukraine have reached a record value over the past two years -16-04-2021, 17:24
Ukrmetallurgprom asks the Antimonopoly Committee to allow Metinvest to bid for16-04-2021, 17:23
A fatal accident occurred on the territory of the Dnieper Metallurgical Plant16-04-2021, 13:01
Cars built for Euro 2012 will be repaired at the Kryukov Carriage Works16-04-2021, 12:46
World Steel Association predicts a good year for metallurgists15-04-2021, 18:19
World Steel Association defines green steel and its variations12-04-2021, 13:14
China unlikely to cut steel capacity in 2021 due to high steel prices07-04-2021, 12:11
Scrap metal market at the beginning of April02-04-2021, 11:10
Rising Chinese Prices Fueled Rising Global Steel Prices - MEPS25-03-2021, 18:54
Sign in with: