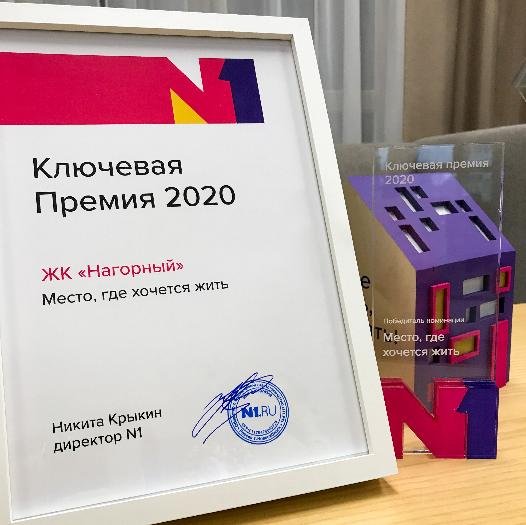 According to the professional portal "ERZ.RF", the competition started on November 1, with the stage of collecting applications. On December 23, the Competition Commission approved the finalists in 23 regions of Russia - 226 residential complexes out of 457 nominees received this status. In the Sverdlovsk Region, the finalists in the nomination “Best residential complex-new building” included RC “Nagorny”, and RC “Makarovsky” - the winner of the “TOP ZhK 2020 Award”, this time the organizers will be evaluated among the federal nominees (in addition, the Competition Commission will select finalists in 59 more regions of the Russian Federation).

The "TOP ZhK" award is organized by the RF CCI Committee on Entrepreneurship in the Construction Industry, the RUIE Commission on Construction and Housing Policy and the National Association of Housing Developers Association for the second year in a row ; it became the largest event on the Russian primary housing market. Several hundred independent experts evaluate new buildings by 106 parameters, in accordance with the requirements of the Standard for the integrated development of territories created by the Ministry of Construction of Russia and the DOM.RF corporation: social infrastructure, courtyard spaces, security, architecture, facades, environment for people with limited mobility, etc.

Summing up the results of the Prize and the ceremony of awarding the winners will be held in March next year in Moscow as part of the Russian construction week RosBuild 2021.

Recall that 1155 projects from 772 developers from 74 regions of the country. 537 residential complexes from 438 developers reached the final. Residential complex "Makarovskiy" from "UMMC-Developer" was recognized as the best new building in the Sverdlovsk region and the best high-rise new building in the country. The company "UMMC-Developer" itself is the absolute leader in the rating "TOP developers by consumer qualities" and is included in the TOP-5 most reliable developers of the Sverdlovsk region according to the portal "ERZ.RF".

Residential complex "Nagorny" 23 December 2020, became the winner of another prestigious professional competition for developers and realtors "Key Award - 2020" from the N1.RU portal in the "Place to live" nomination.

Construction divisions of the UMMC holding have been building residential and commercial facilities since 2005. In 2017, the company consolidated the construction of development projects under the UMMC-Developer brand. Currently, the implementation of three large residential complexes in Yekaterinburg is underway:

Makarovsky - this project was recognized as the best in Russia by the version of the portal "ERZ.RF" (December 2020). The residential area "Izumrudny Bor" is the largest project in the north of Yekaterinburg (included in the top 20 housing estates in the region) and the residential quarter "Nagorny" is also included in the top three housing estates in the region according to the data of "ERZ.RF".

On this topic
Developer "UMMC-Zastroyshchik" was recognized as the best in terms of consumer qualities
The company "UMMC-Developer" has started construction of the 2nd stage of the residential complex
Residential complex of Yekaterinburg again entered the TOP of the LCD Russia
The TMK Board of Directors recommends accepting the voluntary offer of the TMK subsidiary in
The first of 11 thousand: LCD "Makarov" from the "UMMC-Builder" recognized as the best residential
The company "UGMK-the Developer" has commissioned a residential house in the residential complex
Добавить комментарий
Комментарии (0)
News Analytics
January lockdown cuts orders to Ukrainian machine builders, critical for light16-01-2021, 08:11
US imposes new sanctions on Iran in the last days of Trump's presidency16-01-2021, 08:18
Germany gave permission for the completion of Nord Stream 2 in January - May15-01-2021, 11:10
Zaporizhstal exported about 900 thousand tons of rolled metal along the Dnieper15-01-2021, 11:39
Russian automotive market shrank 9.1% in 202015-01-2021, 09:44
China will overtake the United States to become the world's largest economy in27-12-2020, 12:04
The shortage in the US steel market will last at least until the end of the25-12-2020, 11:36
Steel production in China to surpass one billion tons this year23-12-2020, 10:59
Iron ore prices hit seven-year high and continue to rise15-12-2020, 10:26
Prices for metallurgical raw materials continue to rise in regional markets10-12-2020, 11:32
Sign in with: