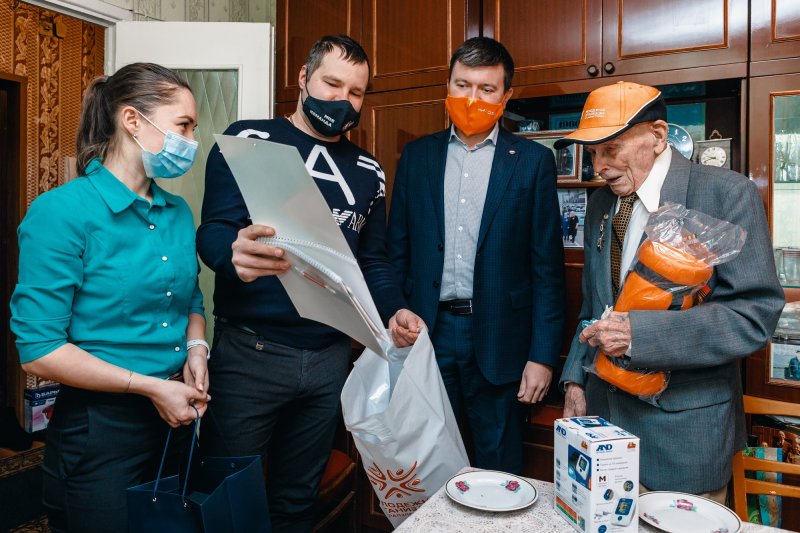 In the morning he does exercises and every day he takes a short walk, communicates with friends and reads newspapers. On the threshold of the centenary, the veteran planted a personal tree on the site of the new school №1 and called it the Tree of Peace.

- I really want to live, no matter what, - says the hero of the day. And with a positive attitude, he enters the second century of his life.

Vasily Petrovich was born on January 13, 1921 in a remote village of the Tyumen region. His fate has absorbed many epochal events. In his best young years, he defended his homeland from the German fascist invaders. In 1942, after military service in the Far East, Vasily Petrovich went to the front. And immediately - in the very thick of it, near Moscow. As an unfired soldier, he experienced the hardships of retreat and the confusion of the first months of the war. He remained alive by a miracle - thanks to his agility and ingenuity.

From the first to the last day he fought on the Kursk Bulge. Until now, he cannot recall this bloody meat grinder without a shudder. At first, every day from the very dawn, from four o'clock in the morning, they were under aerial bombardment. And during the battle itself, there were so many wounded and dead that the car could not drive across the battlefield. For heroism shown in this battle, Vasily Petrovich was awarded the Order of the Red Star. During the entire war Vasily Petrovich was wounded twice. His feats of arms were awarded medals "For Courage" and "For Military Merit", the Order of the Patriotic War, II degree.

Since 1951, Vasily Petrovich has been living in Verkhnyaya Pyshma. At the Pyshminsky Copper Electrolyte Plant (today JSC Uralelectromed) he worked for 20 years in the electrolyte shop. During these years, he built a house for himself: he prepared timber, raised walls, laid the floor.

Having worked hot and trained as a driver, he went to work in a motor transport department. For two decades he turned the wheel, worked in the garage.

After retiring, Vasily Petrovich continued to drive a car until he was 90 years old. He was actively involved in the patriotic education of young people - he told schoolchildren about the war. On May 9, for several years, as part of the crews of retro cars, he participated in the Verkhnyaya Pyshminsky Victory Parade. He was given the honorary right to light an eternal flame at the reconstructed Cranes memorial.

On this topic
June 24, Verkhnyaya Pyshma: Alley of heroes, the dress-up calculation, the Fate of the soldier and
The pencils, the procession of historical autoplatforms and concert for the war veteran in the yard
Beloretsk has become a City of Labor and Glory
Verkhnyaya Pyshma met Metallurgist Day with a colorful carnival
The eternal flame from the factory furnace, Victory Waltz, Procession of military equipment and a
May 9 in Verkhnyaya Pyshma: Eternal flame from the factory oven, Victory Waltz, Procession of
Добавить комментарий
Комментарии (0)
News Analytics
Industry association predicts 8% growth in passenger car sales in China in 202123-01-2021, 11:07
YUZHMASH expects the adoption of the new space program of Ukraine in the near22-01-2021, 15:18
Eleven miners still await rescue from exploded gold mine in China22-01-2021, 12:34
Rivne NPP shut down power unit No. 122-01-2021, 12:13
Russia will start producing "green" hydrogen22-01-2021, 10:47
China will overtake the United States to become the world's largest economy in27-12-2020, 12:04
The shortage in the US steel market will last at least until the end of the25-12-2020, 11:36
Steel production in China to surpass one billion tons this year23-12-2020, 10:59
Iron ore prices hit seven-year high and continue to rise15-12-2020, 10:26
Prices for metallurgical raw materials continue to rise in regional markets10-12-2020, 11:32
Sign in with: