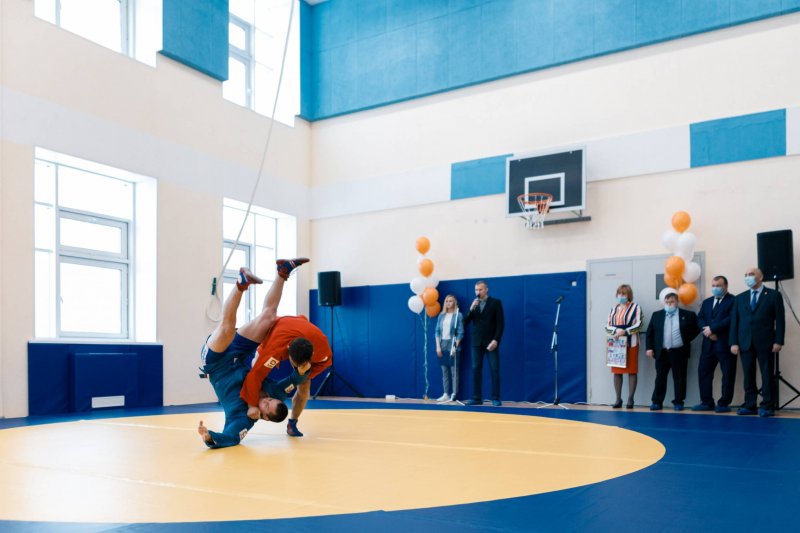 Today, a new hall for sambo training has opened in Verkhnyaya Pyshma at school №25. Its appearance became possible thanks to the cooperation of the administration of the Verkhnyaya Pyshma GO and the local Sambo Club UMMC, which continues to implement the program for the development of this sport among children in the territories of the presence of enterprises and organizations of the Ural Mining and Metallurgical Company. So, within the framework of this program, a new sports facility in the 25th school is equipped with a professional wrestling floor for two mats, and in the near future the necessary equipment will be purchased for young sambists. Under the guidance of two coaches, up to 100 people will be able to train here, you can sign up for the section right now.

“This is a really extensive program that the UMMC is implementing in cooperation with municipalities,” said Shukhrat Makhmudov, President of the Sverdlovsk Region Sambo Federation, who was present at the ceremony. ... - In order for children to be engaged in wrestling, to join a healthy lifestyle, new gyms are equipped, professional specialists are invited. In addition, the Sverdlovsk region is a part of the all-Russian project "Sambo to school", and this infrastructure allows teenagers to master the skills of self-insurance, correct grouping, avoid various kinds of injuries.

According to Valery Stennikov, General Director of the UMMC CS due to the growth in the number of such facilities and the increase in the number of people engaged in sambo, the club also counts on replenishing the personnel reserve:

- If the guys work hard and achieve certain results, we will gladly accept them into our ranks.

And what they should strive for, the schoolchildren saw during the demonstration performances of the stars of the UMMC CS: world champions Vladimir Balykov and Stanislav Skryabin, as well as brothers Uali and Ali Kurzhev, who recently strengthened the team of multiple winners and prize-winners of the World and European Championships. p>

The hall in secondary school №25 is not the first facility in Verkhnyaya Pyshma, which was supported by the UMMC program for the development of sambo. Earlier, in 2017 and 2018, the sambo halls at school # 33 and the UMMC DS were re-equipped, and the guys who train there received new equipment.

Moreover, just a week ago, a new sambo hall was opened in Sysert. The UMMC CS has equipped the premises with sports equipment, laid professional carpets and installed stands.

Let us remind you that the UMMC children's sambo support program has been operating since 2017. Today, in addition to the Sverdlovsk region, it covers three more regions. In total, these are ten cities, nearly 20 halls and sections, and almost 2,000 students.

Финансовая аналитика, прогнозы цен на сталь, железную руду, уголь и другие сырьевые товары. More news and analytics on Metallurgprom telegram channel - subscribe to get up-to-date market information and price forecasts faster than others.
Сomments
Добавить комментарий
Комментарии (0)
On this topic
A new hall for sambo training opened in Sysert
The TMK Board of Directors recommends accepting the voluntary offer of the TMK subsidiary in
Sambo Club UMMC organized a training camp for young athletes
A new sambo section has opened at school No. 17 of Sukhoi Log
A school was reconstructed and an ice arena built in Verkhnyaya Pyshma
The eternal flame from the factory furnace, Victory Waltz, Procession of military equipment and a
News Analytics
Chinese steel exports up 28.2% - customs data07-12-2022, 23:43
UK approves construction of new coal mine for the first time in 30 years07-12-2022, 23:29
Analysts predict 5% annual growth in the iron casting market through 203006-12-2022, 12:44
Oman to build a new steel plant worth $3 billion in 3 years06-12-2022, 12:14
Tesla's Shanghai gigafactory set a new record for electric vehicle shipments in05-12-2022, 15:24
Analysts predict 5% annual growth in the iron casting market through 203006-12-2022, 12:44
Commodity prices will fall, metals quotes will rise slightly - Focus Economics28-11-2022, 13:28
Platinum market to face shortage next year - WPIC22-11-2022, 18:25
Global steel demand falls and will fall by 2.3% in 2022: WorldSteel19-10-2022, 23:12
Iron ore prices fall to 11-month low15-10-2022, 10:36
Sign in with: