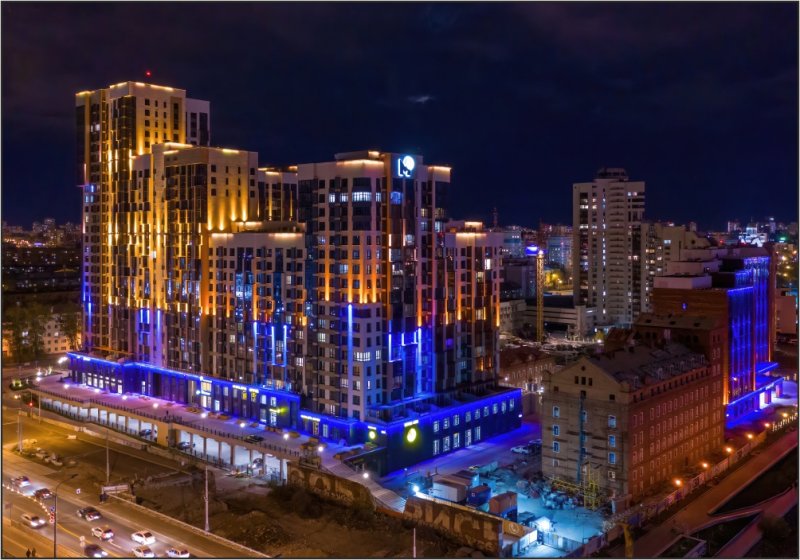 The residential block of business and elite class "Makarovsky", which the company "UMMC-Developer" is building in Yekaterinburg, became a finalist of the All-Russian urban planning competition - the prize "TOP LCD - 2021" in one of the most prestigious nominations of the competition - "Best residential complex - a new building in the Russian Federation. ”

Several hundred developers from all over the country and more than a thousand residential complexes are participating in the TOP ZhK - 2021 award. According to the organizers (the RF CCI Committee on Entrepreneurship in Construction, the RUIE Commission on Construction and Housing Policy, the National Association of Housing Developers Association and the ERZ.RF professional portal), there are 102 regional nominations and 6 federal nominations in the competition. A large-scale group of independent experts evaluate new buildings by 106 parameters, in accordance with the requirements of the Standard for the Integrated Development of Territories (developed by the Ministry of Construction of Russia and the DOM.RF Corporation): infrastructure, courtyard spaces, security, architecture, construction materials, environment for people with limited mobility, environment, transport accessibility .

Summing up the results The awards and the award ceremony will be held in March 2021 in Moscow, within the framework of the Russian construction week RosBuild 2021 .

Let us remind you that 1155 projects from 772 developers from 74 regions of the Russian Federation took part in the competition "TOP LCD - 2020". 537 residential complexes from 438 developers reached the final. Residential complex "Makarovsky" from "UMMC-Developer" was recognized as "The best new building" in the Sverdlovsk region and "The best high-rise new building" in the country.

The company "UMMC-Developer" has twice received the sign "Reliable builder of Russia" (2018, 2019), is the absolute leader in the rating "TOP developers by consumer qualities" in the Sverdlovsk region and is included in the TOP-3 best developers in the country according to this criterion, and also received the maximum trust score - 5 points according to the portal "ERZ.RF ".

Construction divisions of UMMC holding have been building residential and commercial facilities since 2005. In 2017, the company consolidated the construction of development projects under the UMMC-Developer brand. Currently, the implementation of three large residential complexes in Yekaterinburg is underway:

Makarovsky - this project was recognized as the best in Russia by the version of the portal "ERZ.RF" (December 2020). The residential area "Izumrudny Bor" is the largest project in the north of Yekaterinburg (included in the top 20 housing estates in the region) and the residential quarter "Nagorny", also included in the top three housing estates in the region, according to the portal.

On this topic
UGMK-Zastroyshchik entered the TOP of the best developers in Russia
RC "Nagorny" became a finalist of the All-Russian urban planning competition "TOP RC - 2021"
Developer "UMMC-Zastroyshchik" was recognized as the best in terms of consumer qualities
Residential complex of Yekaterinburg again entered the TOP of the LCD Russia
The first of 11 thousand: LCD "Makarov" from the "UMMC-Builder" recognized as the best residential
The company "UGMK-the Developer" has commissioned a residential house in the residential complex
Добавить комментарий
Комментарии (0)
News Analytics
Ukraine and the United States are deepening cooperation in the trade and20-04-2021, 20:46
Nikopol pipe plant "Centravis" is approved as a supplier of the Chinese20-04-2021, 20:10
The capacity of the domestic steel market in Ukraine in January-March decreased19-04-2021, 10:33
In Russia, there is an exuberant demand for agricultural machinery19-04-2021, 10:24
Iran is satisfied with the reaction of the world community to 60% enrichment of18-04-2021, 13:24
World Steel Association predicts a good year for metallurgists15-04-2021, 18:19
World Steel Association defines green steel and its variations12-04-2021, 13:14
China unlikely to cut steel capacity in 2021 due to high steel prices07-04-2021, 12:11
Scrap metal market at the beginning of April02-04-2021, 11:10
Rising Chinese Prices Fueled Rising Global Steel Prices - MEPS25-03-2021, 18:54
Sign in with: