Miners of the Gaysky GOK Underground mine set another production record 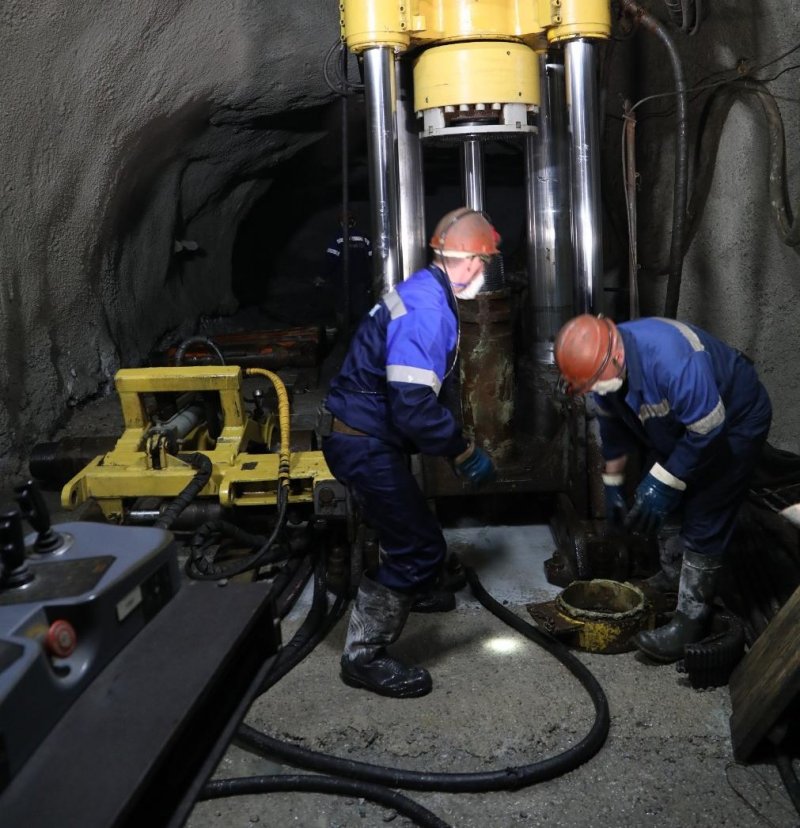 For the first time at the underground mine of PJSC "Gaysky GOK" (an enterprise of the raw materials complex of UMMC), a ventilation rising (vertical mine working) with a length of 160 meters was passed. The drilling was carried out using a Robbis drilling rig at the 990 and 1150 meters floors.

Previously, the maximum vertical rise length was 80 meters (at the 1150-1230 meters floor). “The miners managed to cover twice the distance and significantly reduce the volume of tunneling work due to the fact that they excluded the boring of an intermediate horizontal working at the 1070-meter mark,” said Dmitry Nesterenko, head of the Gaysky GOK Underground Mine.

According to experts, a pilot well with a diameter of 311 millimeters was first drilled from the 990-meter horizon, where the drilling rig is installed, to the 1150-meter horizon. Robbis is equipped with a hydraulic mechanism for extension of drill rods L = 1.5 meters. To pass the 160-meter uprising, it was necessary to build 107 rods. The pilot well was drilled in 33 shifts.

“After the horizontal well located at a depth of 1,150 meters was hammered, a reamer is attached to the drilling rig and the“ upward movement ”begins. As it rises, the reamer cuts into the rock and increases the diameter of the pilot hole to 2,429 meters. After passing every one and a half meters, one rod is unscrewed. The expansion of the riser was completed in 32 work shifts, - said Andrey Matorin, Deputy Chief Engineer of the Underground Mine for Drilling and Blasting.

Note that the tunneling work was carried out by a team of operators of the Robbis drilling rig at the drilling site No. 4 of the Underground Mine. Andrey Zotov is in charge of the forward link.

“The ventilation uprising allows us to regularly ventilate the workings of the repair station located at the 1230-meter horizon,” said Dmitry Nesterenko, head of the Gaysky GOK Underground Mine. In the Orenburg Region, there are such enterprises of the Ural Mining and Metallurgical Company as Orenburg Radiator LLC (Orenburg), which specializes in the development, implementation and serial production of radiator products, Mednogorsk Copper and Sulfur Combine LLC (Mednogorsk), which specializes in production of blister copper.

Сomments
Добавить комментарий
Комментарии (0)
Partner news
On this topic
One of the best children's tennis tournaments in the country "UMMC-Open" has started in
NLMK Board of Directors has appointed the Annual Shareholders Meeting for April 19, 2019
The miners of the Gaisky GOK completed construction of another underground Elevator
Laser engravers for metal and plastic
Mikhailovsky GOK presented to the head of the Ministry of Natural Resources unique projects for the
Jung LS 990 collection
News Analytics
Elon Musk urges people to leave Binance, Coinbase and other cryptocurrency28-11-2021, 13:19
Ukraine's population is declining at one of the fastest growing rates in the28-11-2021, 13:09
Spain refuses to build uranium plant28-11-2021, 13:19
Elon Musk turned out to be from subsidies for Tesla plant in Germany27-11-2021, 11:33
State Service of Geology and Mineral Resources of Ukraine has updated data for27-11-2021, 11:40
What unites Ilona Mask and other richest people in the world31-10-2021, 12:28
Moldavian Gordian knot - big politics28-10-2021, 11:03
Elon Musk's equity capital is approaching the $ 300 billion mark27-10-2021, 13:26
Hopes are dying to end the world's dependence on coal25-10-2021, 16:54
Will the rise in steel prices limit metallurgical production?25-10-2021, 11:44
Sign in with: