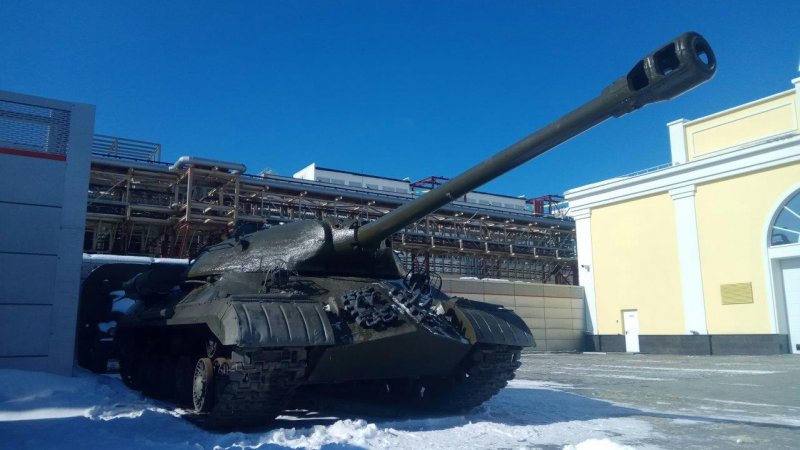 The IS-3 tank has appeared in the museum of military equipment. He was delivered on a car platform. The combat vehicle can move under its own power, but it was decided to keep it: the age of the tank is more than 70 years, and it can be operated without harm to the original components and mechanisms only at a constant above-zero temperature, which is expected only in April.

The tank was lowered from the trawl using two powerful cranes with a total lifting capacity of 130 tons.

From - for the characteristic shape of the upper frontal part of the hull, the IS-3 received the nickname "Pike". The abbreviation IS stands for "Joseph Stalin" - the official name of the series of Soviet heavy tanks produced in 1943-1953. Index 3 corresponds to the third production model of the tank of this family.

The Pike was put into production in the last days of the Great Patriotic War, so the tank did not have time to take part in the battles, but attracted the attention of the whole world at the Berlin parade Allied victories in World War II.

IS-3 features enhanced armor protection and a low profile that makes the tank unobtrusive. According to Ivan Silchenko, a researcher at the UMMC museum complex, the IS-3 “was one of the most formidable tanks of that time. It was created by Soviet engineers during the war. And in the post-war period it was still in service with the USSR and the armies of the allies of the Soviet Union for a long time. ”

The new exhibit will take a well-deserved place in the exhibition center“ Parade crew ”, which is part of the UMMC museum complex. The exposition of the "Parade Crew" presents running samples of military equipment from the period of the 1930s-1940s. They annually take part in solemn processions in Verkhnyaya Pyshma in honor of Victory Day. This year, the festive convoy will consist of 39 historical combat vehicles. Nine of them will for the first time pass along the main avenue of the copper capital of the Urals.

On this topic
Magnitogorsk Iron and Steel Works became a member of the international project "Engineers of
June 24, Verkhnyaya Pyshma: Alley of heroes, the dress-up calculation, the Fate of the soldier and
The eternal flame from the factory furnace, Victory Waltz, Procession of military equipment and a
May 9 in Verkhnyaya Pyshma: Eternal flame from the factory oven, Victory Waltz, Procession of
The winners of the patriotic competition were awarded at the Museum of Military Equipment of the
The line of T-34 tanks in the Museum of military equipment has been replenished with a rare exhibit
Добавить комментарий
Комментарии (0)
News Analytics
Iran is satisfied with the reaction of the world community to 60% enrichment of18-04-2021, 13:24
Gas prices in Ukraine have reached a record value over the past two years -16-04-2021, 17:24
Ukrmetallurgprom asks the Antimonopoly Committee to allow Metinvest to bid for16-04-2021, 17:23
A fatal accident occurred on the territory of the Dnieper Metallurgical Plant16-04-2021, 13:01
Cars built for Euro 2012 will be repaired at the Kryukov Carriage Works16-04-2021, 12:46
World Steel Association predicts a good year for metallurgists15-04-2021, 18:19
World Steel Association defines green steel and its variations12-04-2021, 13:14
China unlikely to cut steel capacity in 2021 due to high steel prices07-04-2021, 12:11
Scrap metal market at the beginning of April02-04-2021, 11:10
Rising Chinese Prices Fueled Rising Global Steel Prices - MEPS25-03-2021, 18:54
Sign in with: