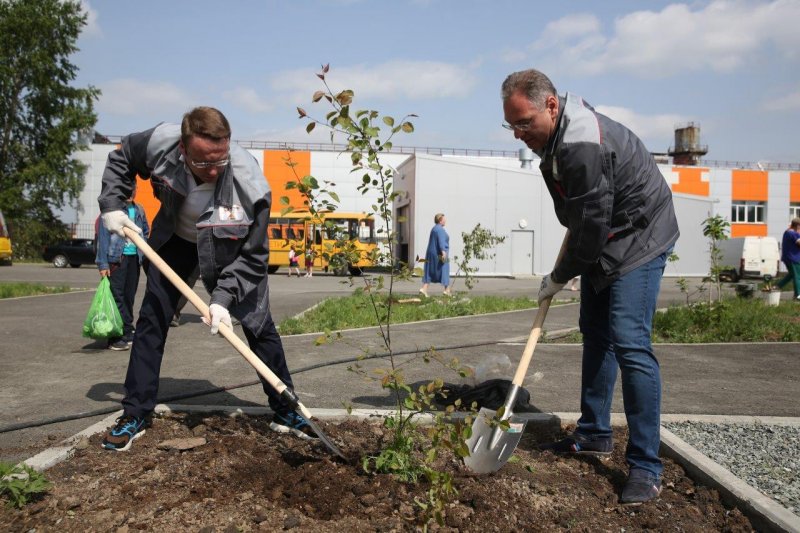 On Tuesday, May 25, in the village of Kirzavod on the territory of school No. 9, which opened this academic year, 200 seedlings were planted: mountain ash, birch and apple trees. They were acquired by PJSC Sredneuralsky Copper Smelting Plant (an enterprise of the metallurgical complex of OJSC UGMK) in the nurseries Michurinsky and Olenyi Ruchyi. Thus, SUMZ joined the International Action "Garden of Memory", which started in March 2021 in the hero city of Sevastopol. Director of PJSC "SUMZ" Bagir Abdulazizov, Minister of Natural Resources and Ecology of the Sverdlovsk Region Alexey Kuznetsov, Deputy of the Legislative Assembly took part in the environmental action Sverdlovsk Region Alexander Serebrennikov, Head of Civil Society Revda Irina Teisheva and schoolchildren. Alexander Kuznetsov, Minister of Natural Resources and Environment of the Sverdlovsk Region: - SUMZ is our constant partner in environmental campaigns. Not only in planting forest crops, but also in stocking as well. Thanks to UMMC, this year, within the framework of the "Garden of Memory" campaign, we are planting more than 300 thousand seedlings on the territory of the region. For our region, loaded with industrial production, such actions are very important! Bagir Abdulazizov, Director of PJSC SUMZ: - Participation in the action "Garden of Memory" is a great honor for us. It is in memory of our fellow countrymen, residents of Sumz, who gave their lives so that we could live peacefully and be happy. Therefore, we are holding the action in this very place, where the new school and children are participating. In fact, this is great and very correct! It comes from the heart. For us to remember. It is important. We will continue to take part in this action. The goal of the “Garden of Memory” action is to create green monuments to all those who died during the Great Patriotic War. The organizers of the action are the All-Russian Public Movement "Victory Volunteers", the Regional Charitable Foundation for Preserving the Memory of the Victory Commanders with the support of the Ministry of Natural Resources and Ecology of the Russian Federation, the Federal Forestry Agency, as well as the All-Russian Society for the Conservation of Nature and the national project "Ecology". Reference PJSC "Sredneuralsky Copper Smelting Plant" is one of the largest chemical and metallurgical complexes in the Middle Urals. SUMZ was put into operation on June 25, 1940. Main production: copper smelting shop, sulfuric acid shop, concentrating plant. The main types of products: blister copper, sulfuric acid. During the Great Patriotic War, 1,800 SUMZ personnel went to the front, 437 of them did not return: 234 died on the battlefields, 170 were missing, 29 died in hospitals, 4 were tortured to death in concentration camps. The planting of trees on the territory of Revda and Pervouralsk is carried out within the framework of the Agreement on cooperation in the field of environmental protection between the Government of the Sverdlovsk region and PJSC "SUMZ". Secondary school No. 9 opened in the village of Kirzavod of the urban district of Revda on September 1, 2020.

Обозреватель рынка стали и цветных металлов. Пишу аналитические обзоры рынка для Металлургпром. More news and analytics on Metallurgprom telegram channel - subscribe to get up-to-date market information and price forecasts faster than others.
Сomments
Добавить комментарий
Комментарии (0)
On this topic
SUMZ held a charity event for planting trees in a specially protected natural area Kabalinskie
SUMZ decorated the park of the Revda Palace of Culture with spherical willows
SUMZ helped open a playground
SUMZ and Sima-Land cleaned up on the beaches in Revda
SUMZ released ten thousand silver carps into the Novomariinskoye reservoir
SUMZ has put into operation the system of collection, cleaning and evacuation of aspiration gases
News Analytics
The production of passenger cars in Russia decreased by 2.8 times in eight29-09-2022, 11:19
Donetsk and Torez electrotechnical plants will start producing electrical29-09-2022, 11:37
Ukrainian coking plants reduced gross coke production by 55.2%29-09-2022, 11:28
China ramps up investment in transport to bolster economy29-09-2022, 11:33
The heads of mining companies named the main risks for business29-09-2022, 10:03
China production cuts in winter will give limited boost to steel markets -15-09-2022, 10:09
Steel prices may rise as manufacturers stop production11-09-2022, 14:06
IREPAS: The global long products market is in a "dramatic situation"10-09-2022, 20:49
Steel prices are unlikely to rise significantly in the near future - analysts02-09-2022, 22:58
Steel prices may move up on new data from China31-08-2022, 12:19
Sign in with: