June 24, Verkhnyaya Pyshma: Alley of heroes, the dress-up calculation, the Fate of the soldier and combat aircraft 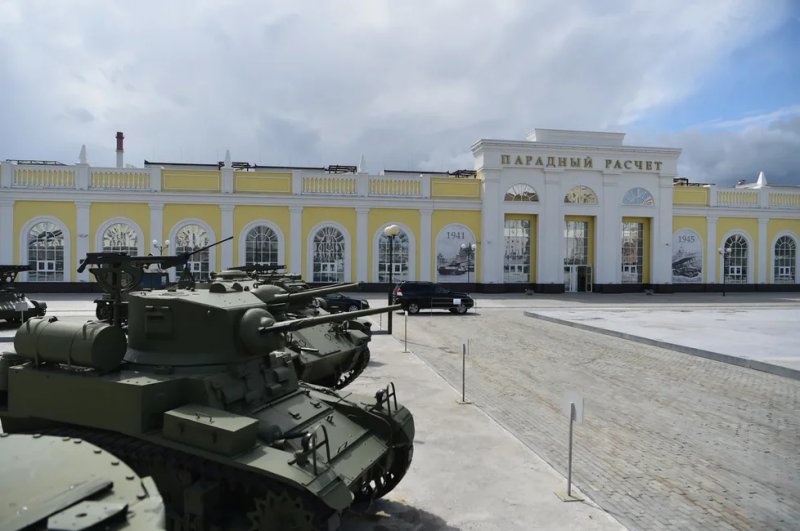 In Verkhnyaya Pyshma held a solemn event dedicated to the Victory in the great Patriotic war: the opening of the building type in the Museum complex of UMMC Ekaterinburg, Avenue of heroes in the city Park of Military glory, handing the two Soldiers ' fate to the relatives of the fallen heroes and the pencils.

In the year of the 75th anniversary of the Victory in the Museum complex of UMMC opened the building type - new exhibition centre with a total area of over 3000 m2. It has been dedicated to the history of the Soviet military Paradou. General Director of UMMC Andrey Kozitsyn showed the exposition of the Governor of Sverdlovsk region Evgeny Kuyvashev, commander of the Central military district Colonel-General Alexander Lapina and other guests meropriatia. the building houses more than 50 exhibits from the number of running samples of military equipment of the period of the 1930s and 40s. Thematically the exhibition is divided into two sections. The first one presents the technician, who participated in the November 1941 parade and a pre-war parade: trucks, various modifications of armored vehicles, the legendary tanks t-34-76, T-35, KV-1 and other military tehniki. the second section of the exhibition – equipment, took part in the Victory parade June 24, 1945: developed during the war years, the tanks T-34-85 and self-propelled SU-76, ISU-152, and various samples of wheeled vehicles, artillery. The exhibition includes newsreel and photos of the parade of 1941 and 1945.

In the foyer of the exhibition centre decorated with a photo exhibition dedicated to the history of military parades.

On the facade of the Main calculation there are two photo panels depicting vivid characters of the great Victory – the legendary tank T-34-85 and Combat vehicle rocket launchers BM-13N "Katyusha". Murals created from photographs of Ural people – participants of the great Patriotic war. For their preparation used over 2 000 photos.

Exhibition centre, the "main calculation" will be opened after the removal of all restrictions in pandemic novel coronavirus infektsii. Alley harmoniously fit into the space of the square of Military glory. Its design and construction involved the city-forming enterprise JSC "Uralelectromed". The work was carried out taking into account the wishes of the war veterans and home front workers. The alley consists of 17 granite pedestals, 15 of them placed a bronze bas-reliefs of the heroes of verhnepyshminsky. The martyrology contains a summary of the combat history of each veteran. Also performed additional exterior lighting of a memorial and landscaping on the front storony. At the opening ceremony the two families Verkhnyaya Andrey Kozitsyn presented the Fate of the soldier. This is a traditional event held in the copper capital of the Ural since 2002. Due to search for missing participants of the great Patriotic war, more than 60 families learned about ways to combat their relatives. June 24, the Fate of a soldier received of the family of Vasily Pavlovich Berseneva and George N. Bazhenov.

Vasily Pavlovich Bersenev (born in 1910) went to the front in the first days of the war. The relationship with your family forever was cut short in February 1942 In the course of the archival work was to install the following: V. P. Bersenev died heroically 3-5 may 1942 in continuous heavy fighting on the beachhead Leninskom (Leningrad front, 4th Army). Buried in the village Vadose (primary burial), buried with full military honors in the Lezno village in Novgorod region.

George N. Bazhenov (born 1918) was called to active military service in the Red Army in 1940 As it became known, the Communicator 14 guards independent communications battalion 3 guards infantry division, G. N. Bazhenov died heroically in June 1942, when the combat mission, defending positions on the outskirts of Leningrad. George N. is buried with full military honors in a mass grave in the village of Vasilkovo of the Kirov district of Leningrad oblasti. the ceremony ended with a Minute of silence in memory of the heroes-compatriots and laying flowers at memorial. Spectacular part of the celebration was the flight over the copper capital of Ural aviation equipment.

On this topic
UMMC Zastroyshchik has completed the restoration of the building of the former industrial
In Verkhnyaya Pyshma held a rehearsal of the solemn March of military equipment since the great
The eternal flame from the factory furnace, Victory Waltz, Procession of military equipment and a
May 9 in Verkhnyaya Pyshma: Eternal flame from the factory oven, Victory Waltz, Procession of
Frontline veterans and home front workers are honored at BMK
The winners of the patriotic competition were awarded at the Museum of Military Equipment of the
Partner news
Сomments
Добавить комментарий
Комментарии (0)
News Analytics
Azerbaijan's SOCAR plans to invest in the extraction of battery metals in26-07-2021, 22:00
The first domestic industrial energy storage system was developed and launched26-07-2021, 22:11
The profitability of purchases of scrap metal in Ukraine has decreased, but is26-07-2021, 17:27
Metinvest is ready to pay more than 9 billion hryvnia for the Dnieper steel26-07-2021, 13:01
Cherkassk Azot by Dmitry Firtash completed the modernization of the ammonia26-07-2021, 13:45
On the regional markets of metallurgical products, prices are balancing in a22-07-2021, 16:22
Demand for armaments will ensure a stable growth of armored steel sales by 4%20-07-2021, 10:10
Protectionist Measures Support European Steel Prices Despite Summer Lull19-07-2021, 11:02
Positive price growth is observed in the markets for metallurgical products16-07-2021, 14:12
European steel market is in confusion: price growth has slowed down, but no one21-06-2021, 17:40