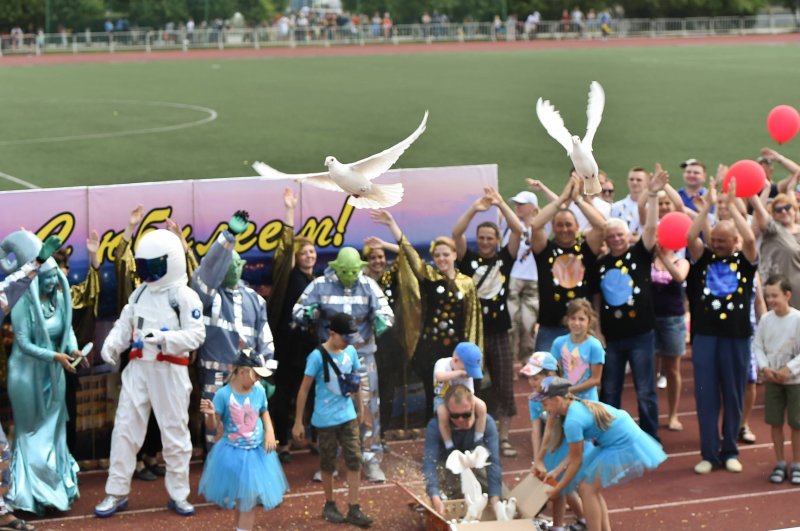 “Now Uralelectromed is rightfully considered one of the flagships of non-ferrous metallurgy not only in Russia, but also in the world. The implementation of large investment projects, such as the modernization of electrolysis production, allowed us last year to produce a record 400 thousand tons of cathode copper for the enterprise, - said Alexey Korolev, chief engineer of Uralelectromed JSC. “But the main wealth is our people, a team that preserves labor traditions established 85 years ago and confidently responds to modern challenges.”

Today at the city stadium a traditional bright action took place - the carnival procession "Anniversary souvenir". It was attended by 23 divisions of Uralelectromed JSC and 11 collectives of enterprises and organizations of Verkhnyaya Pyshma. In the colorful columns, viewers saw "Cosmic Explosion", "Laboratory of Miracles", "Gypsy Camp", "Game of Thrones", characters from Bazhov's tales and much more.

“We are already holding the 19th carnival in Verkhnyaya Pyshma. It is a big colorful holiday that unites colleagues and citizens. Today, the organizations of Verkhnyaya Pyshma and numerous columns of our enterprise present colorful mini-performances for the anniversary of the city and the plant, which they have been preparing for several months, "explained Miroslav Medvedev, Director for General Affairs of JSC Uralelectromed.

For several hours Verkhnyaya Pyshma turned into Rio de Janeiro. A huge "revived" car was presented to the audience by the Transport Department of Uralelectromed JSC.

The employees of the copper-smelting shop of the enterprise were reincarnated as the ancient Egyptians. For the first time, employees of the Polymetal Production Branch of Uralelectromed JSC from Kirovgrad took part in the carnival. The factory workers brought the Black Pearl and Captain Jack Sparrow to Verkhnyaya Pyshma.

The story of how Vovka ended up in the Copper Kingdom was “written” in their stage performance by the workers of the power department.

The jubilee flash mob became the culmination of the festive action. Hundreds of factory workers lined up first in the form of the number 85, and then - 165. In the evening, the townspeople will have a big concert with the participation of Russian pop stars. The groups "White Eagle", "Beetles" and the singer Slava will appear on the stage. Around midnight, residents and guests of the city will see a panoramic 10-minute fireworks display with a height of rise of "lights" up to 200 meters.

On this topic
Main day: BMZ celebrated Metallurgist Day
OEMK celebrates its 45th anniversary
Anniversary melting took place at the head enterprise of UMMC
The eternal flame from the factory furnace, Victory Waltz, Procession of military equipment and a
The 10th Northern Dimension Forum has ended in St. Petersburg
JSC "Uralelectromed" produced the 4 millionth ton of copper wire rod
Добавить комментарий
Комментарии (0)
News Analytics
Tibet invests about $ 30 billion in infrastructure projects in 5 years06-03-2021, 14:39
Siemens Energy promised Deutsche Welle to closely monitor democracy in Belarus06-03-2021, 10:32
US and EU suspend the collection of duties that were imposed against each other05-03-2021, 22:48
Turboatom and Electrotyazhmash discussed prospects for cooperation under05-03-2021, 19:04
DMZ Yaroslavsky in February almost doubled the production of rolled products05-03-2021, 18:19
Spread between raw materials and high strength alloy steel in Europe increased01-03-2021, 20:21
Increase in prices is forecasted in the markets of steel raw materials -26-02-2021, 09:25
Troy ounce of gold will drop $ 500 in two years - Fitch25-02-2021, 18:29
Global iron ore production growth to outstrip cumulative production in India23-02-2021, 10:22
Fitch Ratings Warns of “Shocking Impact” on Fossil Fuel Exporters18-02-2021, 14:44
Sign in with: