Without noise and dust: "KRU-Vzryvprom" blew up the jubilee five-billion cube of rock mass 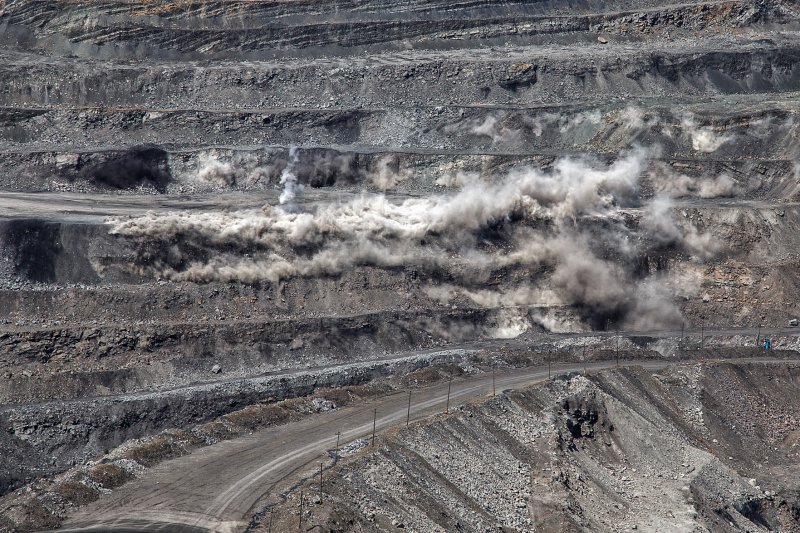 At the Kedrovsky coal mine, JSC "UK" Kuzbassrazrezugol "(an enterprise of the raw materials complex of the UMMC) conducted a reference explosion using modern blasting technologies. With this event, LLC Kuzbassrazrezugol-Vzryvprom, which is part of the structure of the coal company, celebrated its "anniversary" - a five-billion cubic meter of exploded rock mass since the start of blasting operations by the enterprise.

In a few seconds, the mountain massif almost imperceptibly turns into a ready-to-use excavation of the rock mass.

“This explosion is what our enterprise is focusing on today when working at the open-pit mines of the coal company,” emphasizes Evgeny Borisenko, General Director of KRU-Vzryvprom LLC. “Modern explosives, innovative technologies for the design of borehole charges and initiation systems, and other developments can reduce the amount of explosive used and significantly reduce the impact of massive explosions on the environment, while maintaining the required volume and quality of the exploded rock mass.”

In 2013, Kuzbassrazrezugol Management Company and Kuzbassrazrezugol-Vzryprom LLC were included in the working group for the improvement of drilling and blasting operations, created at the initiative of the Siberian Department of Rostekhnadzor. Together with scientific organizations such as VostNII, they are developing new methods and technologies for blasting operations that are effective for the coal industry and safe for the environment and people.

“If we talk about the technologies used in this explosion: - first, the RPGM-100 emulsion explosive is a development of a coal company that ensures minimal emissions of harmful gases into the atmosphere. Secondly, the systems of initiation of domestic production, the task of which is to minimize the seismic impact, - comments Danil Parkhomenko, Technical Director of Kuzbassrazrezugol-Vzryvprom LLC. “Also, the explosion that we conducted today was practically silent thanks to modern blasting technologies."

Formed in 2002 to optimize blasting operations at the open-pit mine of the Kuzbassrazrezugol MC, today KRU-Vzryvprom LLC is one of the leading Russian enterprises in this area. The company not only fully meets the needs of the largest domestic coal mining association in the open way in industrial explosions, but also completely covers the needs for explosives for their conduct, producing modern, reliable and safe explosives using its own technologies.

Обозреватель рынка стали и цветных металлов. Пишу аналитические обзоры рынка для Металлургпром. More news and analytics on Metallurgprom telegram channel - subscribe to get up-to-date market information and price forecasts faster than others.
Сomments
Добавить комментарий
Комментарии (0)
On this topic
Services of the studio of design of premises "HATA DESIGN"
Primetals Technologies representatives noted the high level of production of OEMK and Lebedinsky GOK
The best tennis players of Russia U11 have been identified in Verkhnyaya Pyshma
Primetals Technologies Chooses Rockwell Automation to Support Russian Steel Operations
ShAAZ was visited by specialists of the American company Generac Power Systems
The best young tennis players of the country came to Verkhnyaya Pyshma
News Analytics
British Steel owner asks government for financial support05-10-2022, 13:05
The price of gold crossed the mark of 1700 dollars05-10-2022, 13:28
US coal prices top $20004-10-2022, 10:16
Tata Steel merger plan to secure long-term profits03-10-2022, 10:46
US hydrogen prices to drop to zero dollars per kg in 5 to 6 years: Platts02-10-2022, 21:53
China production cuts in winter will give limited boost to steel markets -15-09-2022, 10:09
Steel prices may rise as manufacturers stop production11-09-2022, 14:06
IREPAS: The global long products market is in a "dramatic situation"10-09-2022, 20:49
Steel prices are unlikely to rise significantly in the near future - analysts02-09-2022, 22:58
Steel prices may move up on new data from China31-08-2022, 12:19
Sign in with: