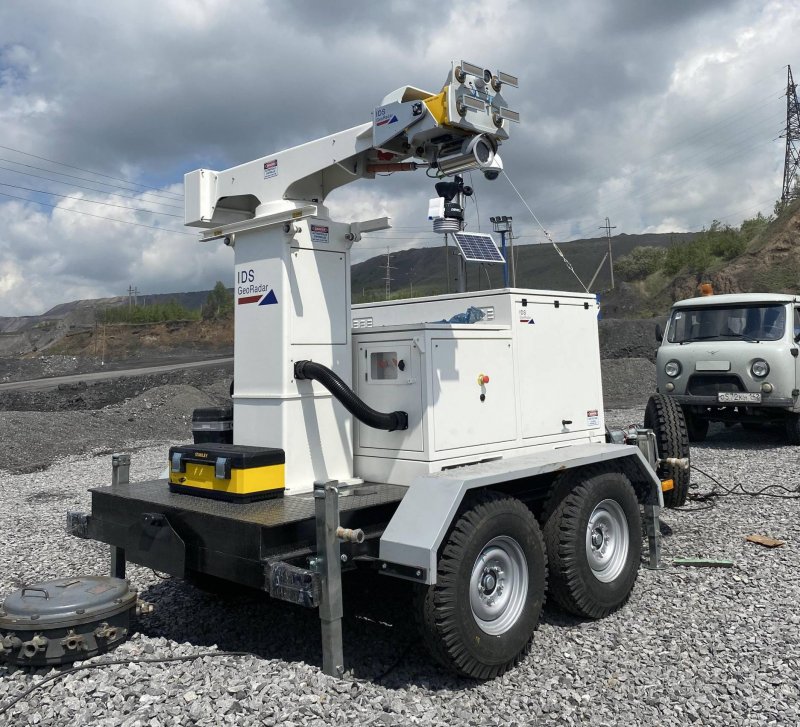 A new generation mobile georadar IBIS ArcSAR has started working at the Bachatsky coal mine of JSC MC Kuzbassrazrezugol (an enterprise of the UMMC raw materials complex). The equipment is designed for remote monitoring of the stability of side slopes and dumps, forecasting and timely warning of threats of collapse and emergency situations. The use of this technology makes it possible to monitor the safety of mining operations around the clock.

This is already the second ground penetrating radar that began work in the Company: the first one was commissioned at the Kedrovsky open pit mine in 2019, and the equipment was tested a year earlier ... Kuzbassrazrezugol was the first coal company in Russia to introduce this technology.

The principle of operation of both slope stability control radars is the same, it is based on radar technologies: the sensor scans the surface of the sides and dumps and in real time over the Wi- Fi transmits information about the state of their stability to the mine surveying and dispatching services.

However, the equipment launched at the Bachatsky open-pit mine has several significant differences. First, the angle of view of the new radar has been increased to 360 ° horizontally (270 ° at Kedrovsky). Secondly, the scanning speed of objects has increased - 40 seconds at 360 ° and 20 seconds at 180 °. In addition, the ground penetrating radar can survey at a distance of up to five kilometers, which is twice the capabilities of the first model.

“To organize remote monitoring and ensure the safety of mining operations at the Bachatsky coal mine, the most difficult field in the Company in terms of engineering and geological conditions, we needed a radar with such technical characteristics that allow us to observe a large area of ​​mine workings ", - comments Elena Sergina, head of the geomechanical control department of MC Kuzbassrazrezugol JSC.

A new generation georadar IBIS ArcSAR is easy to manage, all necessary settings can be made remotely. Uninterrupted access to radar information in 24/7 mode is provided by a backup communication channel, which was implemented in this model according to the technical assignment of the specialists of the Kuzbassrazrezugol Management Company. In case of loss of connection over the Wi-Fi network, the equipment automatically switches to data transmission via the mobile Internet thanks to the installed GSM router, and vice versa.

Georadars for monitoring the stability of slopes are one of the elements of the Kuzbassrazrezugol Management Company Multifunctional Safety System (MFSS), which is based on remote monitoring of all critical safety parameters of mining operations.

Обозреватель рынка стали и цветных металлов. Пишу аналитические обзоры рынка для Металлургпром. More news and analytics on Metallurgprom telegram channel - subscribe to get up-to-date market information and price forecasts faster than others.
Сomments
Добавить комментарий
Комментарии (0)
On this topic
New Rockwell Automation Safety Devices Enhance Safety and Productivity
Remote controls for gates from the company "Remote"
One of the best children's tennis tournaments in the country "UMMC-Open" has started in
NLMK Board of Directors has appointed the Annual Shareholders Meeting for April 19, 2019
SHAAZ has manufactured cooling unit the original layout for the company Generac Power Systems
TMK took part in Steel Safety Day-2019
News Analytics
China's iron ore output to rise in 2023 as new projects are launched30-11-2022, 18:10
"Centravis" agreed to supply a new batch of seamless pipes to a30-11-2022, 16:51
Metinvest enterprises in Ukraine resumed work after massive shelling of29-11-2022, 11:59
The European Council added the violation of restrictive measures (sanctions) to28-11-2022, 14:22
The abolition of export duty in India may reduce the price of Turkish steel28-11-2022, 14:07
Commodity prices will fall, metals quotes will rise slightly - Focus Economics28-11-2022, 13:28
Platinum market to face shortage next year - WPIC22-11-2022, 18:25
Global steel demand falls and will fall by 2.3% in 2022: WorldSteel19-10-2022, 23:12
Iron ore prices fall to 11-month low15-10-2022, 10:36
China production cuts in winter will give limited boost to steel markets -15-09-2022, 10:09
Sign in with: